After Decades, Congress Votes To Make Juneteenth A Federal Holiday 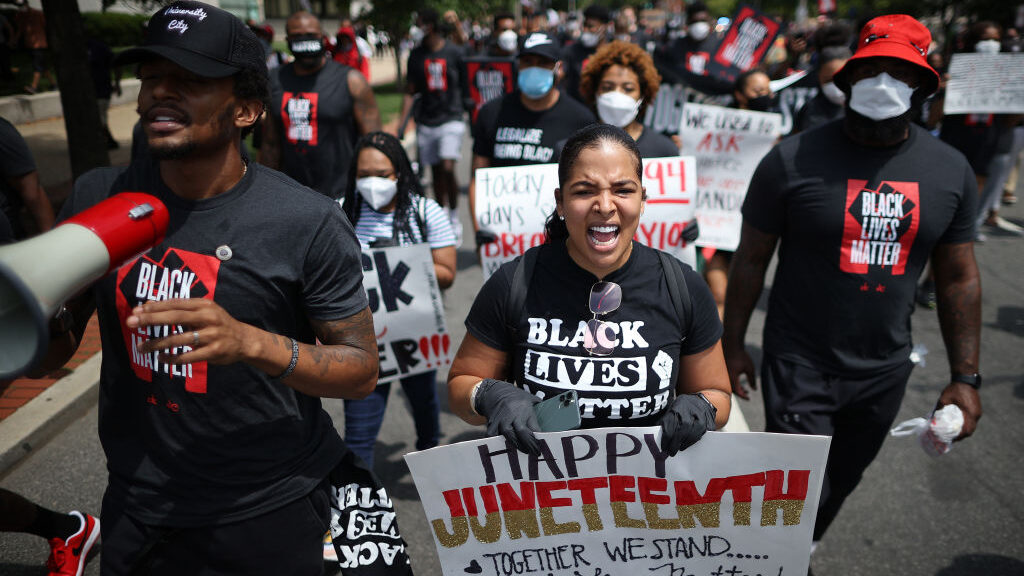 After it languished for months in Congress, lawmakers have passed the Juneteenth National Independence Act to officially establish a federal holiday on June 19, the day which in 1865 slavery finally ended as Union soldiers stormed into Texas.

After unanimously passing the Senate on Tuesday, bill passed the House by a 415-14 vote on Wednesday, and is now headed for President Joseph R. Biden Jr to sign. (All the nay votes were by Republicans.)

The federal holiday follows recognition from 49 states and the District of Columbia of June 19 as an official holiday or remembrance. South Dakota remains the lone holdout.

Its passage was a long time coming, with advocates fighting for years for its recognition.

The bill’s path to passage was made easier when Sen. Ron Johnson (R-Wis.) dropped his objection that giving federal employees another day-off would be costly.

“I am pleased to join in celebrating the U.S. Senate’s unanimous consent passage of the Juneteenth National Independence Day Act,” Rep. Jackson Lee said after approval from the Senate, where its passage had been threatened by the Republican Sen. Johnson.

Jackson Lee said the federal recognition of Juneteenth “honors the end of the years of suffering and brutality that African Americans endured under slavery … and celebrates the legacy of perseverance” faced by black Americans in fights for equality ever since.

Juneteenth the first new national holiday created since Dr. Martin Luther King, Jr. Day — the third Monday of every January, marking his birthday — was established in 1983.

Although many mark President Abraham Lincoln’s 1862 Emancipation Proclamation as the end of slavery in the U.S., the proclamation did not in fact achieve that goal initially.

Lincoln’s order to free the slaves only applied to the rebellious Confederate states — and its enforcement relied, in the end, on the Union Army’s success in overtaking their forces and rooting out the continued servitude of blacks across the expanse of the Deep South.

It was not until the morning of June 19, 1865 — more than two years after Lincoln’s order — that Union forces led by Maj. Gen. Gordon Granger arrived in Galveston, Texas, with more than 2,000 federal troops and announced that slavery in Texas was abolished.

Granger’s men then marched through the streets of Galveston announcing General Order No. 3, which stated that: “the people of Texas are informed that, in accordance with a proclamation from the Executive of the United States, all slaves are free.”

“The Emancipation Proclamation said people were free, but the arrival of the Army and the Juneteenth order made people free,” explained Edward T. Cotham, Jr., Civil War historian and author of “Juneteenth: The Story Behind the Celebration.”

Though “freed,” slaves in the South were left on their own to escape to Union-controlled locales as the Confederate states disavowed Lincoln’s authority to abolish slavery.

Meanwhile, since Lincoln’s Emancipation Proclamation only applied to the Confederacy, slaves in the Union states remained held in bondage. Slavery was officially abolished across the entire country with the ratification of the 13th Amendment on Dec. 6, 1865.

While Texas was the first state to recognize Juneteenth as a holiday, it has shared the spotlight with those who would have fought to prevent it ever happening: the State still also honors notable Confederate “rebels”, such as the confederacy’s president, Jefferson Davis, and Gen. Robert E. Lee, on another state holiday called Confederate Heroes Day.

For the state where the last slaves were freed, it’s a sign of the fight over state identity. Texas state Rep. Steve Toth, for instance, recently introduced a bill that limits classroom discussions on race and denies funding to programs about “critical race theory.”

On May 31, state Democratic lawmakers also staged a walk-out at the Capitol in Austin in protest against laws to restrict voting rights they say would impact people of color.

“It’s very ironic; there’s no logic to that madness,” said former District of Columbia City Councilman Vincent B. Orange, Sr. “But it’s not on the national agenda to teach the true history of America. The United States needs to come to grips with its history. Juneteenth should be a beacon; [Texans] should build on the foundation of Juneteenth.”

In many parts of the county, local celebrations for Juneteenth include street fairs, rodeos, parades and family gatherings, in keeping with traditions dating back to the 1860s.

“There is no natural holiday for emancipation in America since that happened throughout the [Civil War] and even after at a wide variety of times and locations,” said Cotham, the historian, explaining that the first anniversary of Juneteenth took on a life of its own.

“When June 19, 1866, came around, thousands of freed people in Texas chose to join parades and celebrate the arrival of freedom,” he said. “The date was memorialized by a broad consensus of the freed people, not because Texas or any other state had abolished racism, but because it represented an important step along the road to ‘absolute equality.’”

“You can’t talk about Juneteenth without acknowledging Dr. Myers,” said James Tucker, former publisher of the African American Voices newspaper and current foundation board member. “He is the father of the modern-day Juneteenth movement.”

Myers died in September 2018, and his widow, Sylvia Holmes-Myers, is now the foundation’s interim president. Although Holmes-Myers said she supports the passage of the legislation, she noted her husband was not mentioned in the bill — and added that she would have liked to have been invited to Washington, D.C., when the bill was first introduced.

“There was not a senator or congressperson that my husband didn’t write at one point to get a day of observance,” Holmes-Myers said, adding that Biden, then a senator for Delaware, in 2000 wrote back in support for her husband’s efforts. “But, unfortunately, there are forces out there trying to delete the work he did for more than 30 years.”

However, Sen. Markey did acknowledge Myers’ contribution in his remarks announcing the bill’s Senate passage “for working so hard to make this holiday a reality.”

“If I could meet with the president today, I’d thank him for his support back in 2000, and reiterate that June 19 should be a national day of celebration,” Holmes-Myers said.

(Edited by Matthew B. Hall and Alex Willemyns)