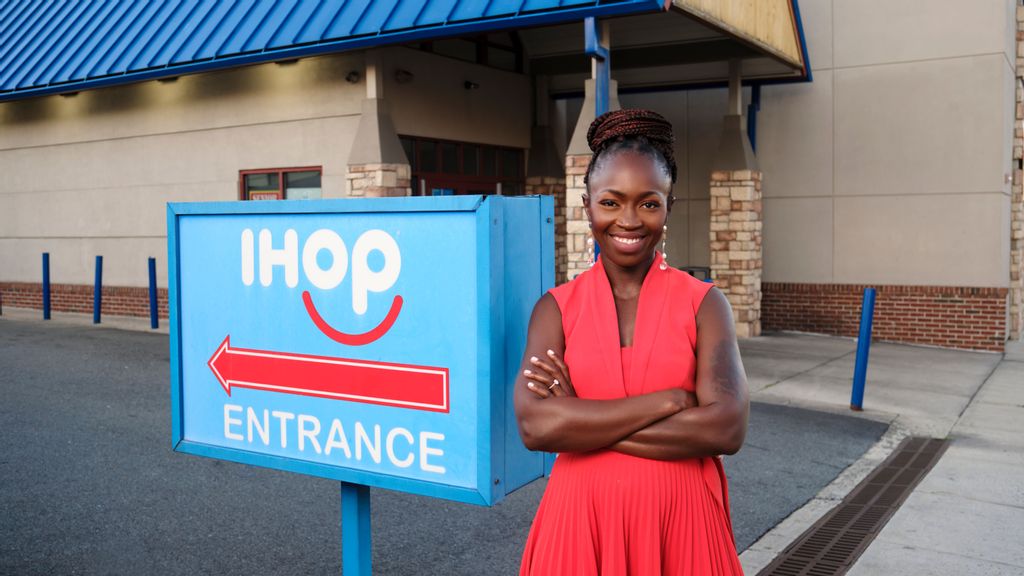 IRVINGTON, N.J. — A child who fled war-torn Liberia is now a successful businesswoman in the United States.

At age 21, Adenah Bayoh bought a three-family home and at 26, she bought her first International House of Pancakes franchise in New Jersey. NJBiz called her a “one-woman economic engine” when it named her among New Jersey’s Top 50 Women in Business for 2014.

Her journey has been one of grit and enterprise.

When she was 8 years old, she and her family were living in Liberia during the brutal civil war that ravaged the country for 14 years. She was able to flee to America and build a new life.

“She’s relentless in pursuing her vision for urban development,” said former Irvington mayor Wayne Smith. “She also has the intuitiveness and the technical skills to get deals done.”

Bayoh’s entrepreneurial spirit took root at in the late ’80s when her grandmother woke her in the middle of the night to flee approaching rebels in Liberia. This was the early days of the civil war (1989-2003) that ultimately killed a quarter of a million people. Thousands of women were raped and mutilated by ruthless warlords and children were recruited as soldiers.

Bayoh and her cousin put her grandmother in a wheelbarrow to escape the impending violence and fled through a thick, hot jungle.  They walked all night and deep into the next day before arriving at a government-sponsored refugee camp in Sierra Leone.

Despite the ordeal, young Bayoh saw a business opportunity.

“When you have a bunch of people that are refugees in one area, there’s a lot of commerce happening because there are a lot of things they don’t have that they need,” Bayoh told Zenger. “My cousin and I decided to make some money. We started walking back through the jungle, back to Liberia, and getting vegetables and things the refugees would buy. We would put the goods on our heads and walk and walk, back through the forest. We did this two or three times a week.

“You had to hope and pray you didn’t encounter any rebels,” Bayoh said.

Upon returning from one of their trips, Bayoh learned her father had arrived to take her back to America. “I don’t know how he found out where we were,” she said. “But he made that journey into a remote village to come to get me.”

A passion for business

Her life in New Jersey set the stage for her future success: She graduated from Weequahic High School in 1997 and earned a degree in business management from Fairleigh Dickinson University. She began working as a banking executive, and after a brief venture owning a beauty salon, she bought a three-family home in Irvington. She lived on the bottom floor and rented out the top two floors.  It was the first in a long list of rental and real-estate acquisitions that includes two- three- and four-family housing.

Bayoh credits her grandmother, Jenneh Viskinda, for instilling a passion for business.

“My grandmother was a very successful business person in her village. She had a lot of businesses.  She had a farm. She had land. She owned real estate. She owned a restaurant. She owned a bread factory. Every Saturday, I was at the marketplace selling something.  I was either at the restaurant or selling bread or selling rice,” Bayoh said.

Author Malcolm Gladwell talks about needing 10,000 hours of practice to master something. Bayoh got most of her practice as a child.

“I spent an immense amount of time at a very early age in commerce, in trade, and in exchange of goods on so many different levels,” she said.  “My early years in Liberia were part of those 10,000 hours.  That played a part in the things I excelled at once I came here.”

Bayoh was looking for a real-estate acquisition in 2007 when she visited a run-down diner in Irvington, west of Newark.  She had worked at McDonald’s in Irvington while in high school and developed a fascination for the city.  After checking out the diner, she sought out Mayor Smith for advice.  He suggested she turn it into an IHOP.

Bayoh received approval for a franchise that, after some renovation, became one of the top-grossing stores in the region.  She now has two IHOPs in Newark and one in Patterson, New Jersey.

“These deals can be complicated, combining private and public sector support and financing,” Smith said.  “She uses her expertise to get people to buy into her vision and create the right packaging to get those deals done. I think in the beginning, some people who thought they could take advantage of her youth were often left with the chips on her side of the table.”

Bayoh takes a hands-on approach to her businesses, spending an estimated 80 to 100 hours a week dealing with vendors and staff and overseeing food production.  She also takes time to interact with her customers.

“There are no mistakes in life,” she said.  “Every conversation and every interaction is to connect the dots. Every journey and every hardship are part of a greater story you’re going to tell. Sometimes, when I look back, I’m in awe. It’s the universe at work.”

She extended her real estate portfolio, buying abandoned buildings in Newark, East Orange and Irvington, and transforming them into commercial businesses or affordable housing.  Giving back to her community is also essential to her: There are turkey giveaways during the holidays at all her restaurants.  Her IHOP locations gave 10,000 free pancakes to first responders, doctors, nurses and anyone who was hungry during the pandemic.

“We were just trying to do our part,” she said.

Bayoh said her background helped define her life. When rebels came to her village to rape and pillage, they were  detoured only when several old women stripped naked, which the rebels viewed as a curse.

“It was the only thing that made them stop,” she said.  “When I came to America, I’d already experienced so much.  I might have been 10 or 11, but my life experiences were that of someone 15 or 18 or even 20 years old. That prepared me to be a little more mature than my peers.  The things that were important to them, weren’t very important to me.”

That’s a message she shares with young entrepreneurs and especially young women.

“You have to realize how powerful your thoughts are,” she said. “Couple that with hard work and intensity; the sky is the limit.  But your work has to match what you’re dreaming about.

“Young women looking to get into any field, my advice is: You’re capable of doing anything you put your mind to,” Bayoh said. “As soon as you put your mind to it, there are angels; there are people waiting to help you actualize your goals. I’ve been blessed to have a strong network of people that have helped me along this journey.

“If you want something badly, the universe will conspire to help you get it. I thank the community and the people who work for me day in and day out, and those who gave me a chance to be my authentic self.”