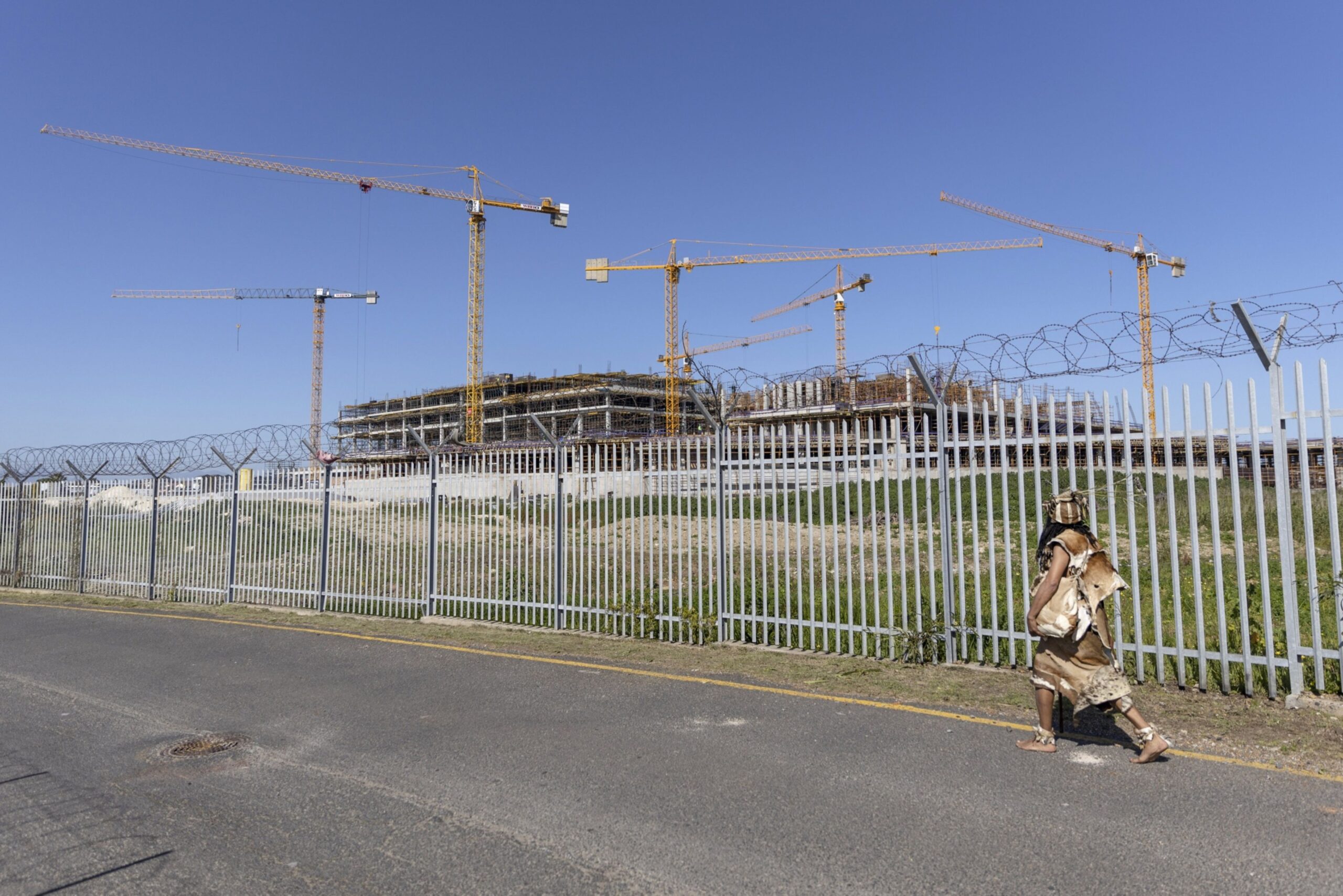 On the outskirts of Cape Town, at the base of Table Mountain and set back from a tangle of freeways, the Liesbeek and Black rivers meet in a small stretch of marshland. The 37-acre plot isn’t pristine — it lies next to a railyard and was until recently home to a golf course — but for centuries, this land has been sacred ground for the Khoisan, a southern African tribe that traces its lineage back more than 100,000 years. In the near future, if all goes to plan, it will be the site of Amazon’s next regional headquarters.

To many local First Nations peoples, news of the project came as an unhappy surprise. Since approval for the e-commerce giant’s $250 million office complex on the 150,000 square-meter site was granted, groups aligned with the Khoisan to oppose the project have tried to derail construction. On a near-monthly basis, dozens of protestors have gathered on the steps of the High Court in Cape Town with signs reading “Concrete will never be our heritage,” and “No means no.” They’ve filed petitions and lawsuits, appealed to media and lawmakers, and forced Capetonians to reckon with the uncomfortable question of whether they’re willing to prioritize economic development over the fight to recognize indigenous land rights in South Africa.

“It’s almost a case of history repeating itself,” said a Khoisan chief Bradley Van Sitters, who also goes by the name Hyi!Gaeb!Gorallgaullaes, the exclamation points representing the clicks in the tribe’s language. “A lot of our people’s blood has been spilled here.”

For its part, Amazon has been working with the developer to accommodate the Khoi and San tribes, which are often referred to collectively. In collaboration with Khoisan members who support the project, the company has announced plans to build a heritage center which will include a garden, a media area, and roads and pathways with Khoisan names.

With the economy stalling, Amazon also brings the promise of jobs and development in a city that desperately needs them. Unemployment is above 30% in South Africa, and nearly 27% in Cape Town. City government representatives say that the project will indirectly create jobs for 19,000 people, including more than 5,200 construction workers. Cape Town’s leaders are thrilled with the arrangement.

Although Amazon delivery services aren’t yet available in South Africa, the e-commerce giant has long had a presence in the country. It has kept offices in Cape Town for about 18 years, and the purpose of the Liesbeek hub is to consolidate the estimated 3,000-plus employees already in the city with another 5,000 or more to be hired in the next few years. This is part of a broader retail expansion into sub-Saharan Africa. Amazon Web Services recently opened offices in Johannesburg and Lagos, and according to people familiar with the matter who do not want to be identified as plans are not public, Amazon intends to roll out online delivery in South Africa and in Nigeria as early as next year.

None of these ambitions, however, rely on the Cape Town headquarters, which is nicknamed Project Zola, according to a bid proposal seen by Bloomberg. “The campus is a nice-to-have rather than a have-to-have,” said Arthur Goldstuck, a technology analyst and managing director of World Wide Worx.

That “nice-to-have” hasn’t come easily. In Cape Town, litigation began almost as soon as the project became public. Protestors scored an early victory against Amazon in March, when the High Court in Cape Town ordered Liesbeek Leisure to temporarily stop work, ruling that “the core consideration is the issue of proper and meaningful consultation with all affected First Nations Peoples.”

It wasn’t the first time Amazon encountered obstacles when trying to set up shop outside the U.S. Plans to build large logistics hubs in France were scrapped on at least four occasions in the past 18 months due to political, environmental and financial concerns. Earlier this year, the company was blocked from building a 76,200-square-meter warehouse near the eastern French city of Belfort on the grounds that the proposal for the project did not include “compensatory measures to offset the destruction of wetlands.”

In the Liesbeek case, however, the decision didn’t stick. The court sided with the company on appeal and dismissed claims that the development would threaten the site’s cultural legacy. As part of the development, $2.2 million (38 million rand) will be spent on environmental rehabilitation, the ruling went on to suggest that “development might enhance the land’s resources.” Construction on the site continued, though nobody can say for sure when it will be completed.

To Tauriq Jenkins, a leader of the Goringhaicona Khoi Khoin Indigenous Traditional council, the decision made little sense. “How can you build a heritage center on top of the history being destroyed?”

What might be the opposition’s last chance to stop the project now comes down to proving that stakeholders were not properly consulted. A date for the review hearing hasn’t been scheduled, but optimism is running low. Without “the deep pockets our opponents have,” said Leslie London, a professor at the University of Cape Town who has been involved in the case, the groups have been “outmanoeuvred legally.”

A sticking point in this conflict is that the Khoisan as a group don’t have one organizational structure. Some factions have sided with Jenkins and Van Sitters, and some with the developer and its promises to restore the site. A court decided that Jenkins didn’t have the mandate to represent the council legally after he was found to have erroneously included an affidavit from a member whom he hadn’t spoken to directly. He’s appealing that decision.

Amazon’s spokespeople in South Africa, Europe and the US declined to respond when contacted multiple times for comment. The site’s developer responded to queries.

Both the city and river valley have complicated histories. Europeans arrived in what is now Cape Town in the 15th century, and over the next several hundred years, local populations were brutally subjected to the rise of the slave trade, the introduction of apartheid, and government efforts to limit Black property ownership. When the Dutch settled along the Liesbeek in the 17th century, parcels of the valley were allocated to farmers and cut off from the Khoisan. It has mostly remained private land ever since. In recent years, the site has been used “as a private golf driving range, restaurant, bar and tarmac parking lot,” according to Liesbeek Leisure Properties Trust, the developer overseeing the Amazon project.

The current saga has led some to wonder why Amazon chose this site in the first place. “When it was announced that the Liesbeek Leisure Properties Trust was the preferred bidder to construct the Amazon headquarters on the River Club site, I was very surprised,” architect Derick Henstra, who advised one of the short-listed firms on the project, said in an affidavit filed as part of the case. “Both Amazon and the LLPT must have been conscious that selecting the site carried with it the risk of substantial delays.” In response, the developer said that “there was no reason to believe there would be delays or legal challenges to what is ostensibly an attempt to breathe life into a dilapidated space,” and added that it had all the necessary approvals to move ahead.

The project has also become a public relations headache. While many Cape Town residents are excited by the opportunities Amazon can offer (both in terms of jobs and midnight shopping binges) others have been put off by how the multinational handled this process. Ryan Dick, a software developer who lives in Cape Town, said he doesn’t “see how putting thousands of tons of concrete on top of a wetland is saving anything.” Another Capetonian, Sarah Driver-Jowitt, said that while she understood why Amazon Web Services wanted to centralize, she thought the site was “not an appropriate one.” Nadia Vatalidis, a human resources specialist, was sanguine about the controversy. Although any project has its downsides, she said, South Africa needs the jobs and investment.

One silver lining may be that the controversy has increased awareness around the Khoisan. In recent years, South Africa’s President Cyril Ramaphosa has signed legislation to acknowledge First Nations governance structures and established an advisory panel to address questions of land restitution. The Khoisan and others have also called on South Africa’s Heritage Resources Agency to declare the Liesbeek River Valley a heritage site. That wouldn’t stop construction, but it could delay it by two years.

As the Khoisan chief Van Sitters observed, fights over land have long moved off the battlefields and now happen in court.

For now, protestors say they will continue their efforts. Standing on the edge of the construction site one morning in October, Jenkins, the indigenous council leader, shook his head at the scene. “We want this development stopped,” he said over sounds of hammering and drilling. “We don’t want this concrete monstrosity here. This is sacred terrain.”

(Corrects Tariq Jenkins’s title to reflect outcome of court decision in eleventh paragraph. Adds additional context about the trial in the 13th paragraph.)
To contact the author of this story:
Loni Prinsloo in Johannesburg at lprinsloo3@bloomberg.net