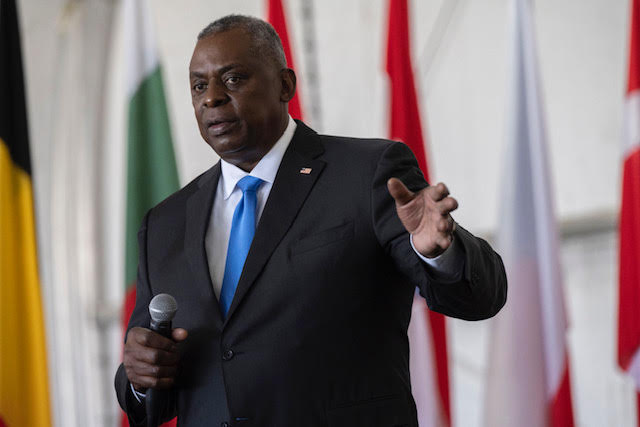 In the last month, retired Gen. Lloyd Austin has found himself in some internationally sensitive situations: receiving a report of communication breakdowns in the Pentagon’s Aug. 29 fatal drone strike in Kabul, shoring up alliances with Eastern Europe amid Russian aggression and withstanding the fallout from the Biden administration’s heavily criticized pullout from Afghanistan.

Add to the mix that Austin is the first Black U.S. secretary of defense and you have a precarious position.

Like his mentor, retired Gen. Colin Powell, who died of coronavirus last month, Austin, 68, is known for his stoic, emotionless nature, said a retired military leader who worked with him. Because the so-nicknamed “silent general” tends to do things exactly by the book and work quietly, he is the one for the job, said Dana Pittard, a Black retired U.S. Army Major General.

Pittard recounted a situation that took place in 1977 when Clifford Alexander was serving as the first Black secretary of the Army. Alexander was presented with a list of one-star generals.

“He said, ‘Is there no one who is African-American who can be an officer?’ The next year, Colin Powell and three others (African Americans) were on that list,” Pittard said. “I see Lloyd Austin being that kind of change agent also.”

Austin’s path to the Pentagon seemed laid out for him.

Austin grew up in the small town of Thomasville, Ga., the same community where Lt. Henry O. Flipper was born into slavery. Flipper was the first Black graduate of the United States Military Academy at West Point and became the first nonwhite officer to lead the Buffalo soldiers of the segregated 10th Cavalry Regiment.

Like Flipper, Austin was accepted into West Point. He graduated in 1975 with a commission in infantry, going on to serve 41 years.

Austin commanded a company with the 82nd Airborne Division based in Fort Bragg, N.C. then went on to earn a master’s degree at Auburn University before serving as company tactical officer at West Point. Austin also served as battalion operations officer at remote Fort Drum, New York, and later returned to command the 82nd Airborne.

As an assistant division commander with the 3rd infantry, Austin helped lead the invasion into Iraq in 2003. He also served as a commanding general for Operation Enduring Freedom in Afghanistan from 2003 to 2005. Austin served as vice chief of the staff of the army and other roles before retiring in 2016.

He was the first Black general to lead an Army division in combat and the first to lead an entire theater of operations.

Pittard remembered Austin as someone who did not like to do interviews and did not try to hog the limelight.

Pittard recalled an episode in Iraq in which he was ground commander and Austin had just transferred power over as he moved to take over Central Command. The late U.S. Sen. John McCain, R-Arizona, was coming to visit.

Austin also is a very careful and studied person who avoids going outside the lines, said Pittard, whose book, “Hunting the Caliphate: America’s War on ISIS and the Dawn of the Strike Cell,” recounts the war against Iraq. Pittard recalled an episode in which the Obama administration ordered only limited strikes in support of the Kurds. The terror group Islamic State was approaching Erbil, the Kurdish capital, with a never-before-seen force of 400, Pittard said.

Pittard pressed Austin to OK a strike, but Austin would not do it.

“I said, ‘Just tell President Obama that I used a fat marker on a map.’ He said no. He followed the guidance to the letter. We missed out on hitting a huge target.”

President Biden nominated Austin to the position in December, at a time when he was under pressure to name a Black Pentagon leader. The decision came at a time when military institutions were moving toward at least the appearance of change. West Point, Austin’s alma mater, and the Air Force Academy in Colorado Springs, Colorado, were both touting their first Black superintendents.

Some members of the Congressional Black Caucus and other Washington insiders had reservations. Some questioned his support for deportations. Some critics wondered if he had the background to improve relations with the United States’ biggest threat, China. Others were hoping the Pentagon slot would be filled by a woman, namely Michele Flournoy, former undersecretary of defense for policy under former President Obama.

Austin overcame all the doubts.

“Gen. Austin is a southerner, has impeccable credentials given his military career and would be an outstanding secretary for the department,”  U.S. Rep. Bennie Thompson, a Democrat from Mississippi and a CBC member, told Politico.

In terms of the White House, Austin already had a relationship with the Biden family. According to published reports, he attended Catholic services in Iraq with Biden’s late son, Beau, when they were stationed there.

In announcing Austin as his pick, President Biden referred to Austin as a “true and tested soldier and leader.”

He added, “There is no question that he is the right person for this job at the right moment, leading the Department of Defense at this moment in our nation’s history.”

For his part, Austin continues to pursue improved relations with China – viewed as the United States’ biggest threat – despite the country’s unfounded claims that he rudely sidestepped diplomatic protocol in working to set up a meeting.

Pittard said his former supervisor is good at promoting better relationships. He remembered a time in 2014 when the Obama administration pressed Austin to create better communications between the Kurds and the Iraqis.

“He called (the president of the Kurdistan Region) and next thing I knew, the Kurds were cooperating,” Pittard said. “That was because of the respect the Kurds had for him.”

Austin also has marched forward in terms of improving inclusion and diversity. In February, as the Pentagon continued to contend with right-wing extremism among military members, Austin signed a memo ordering commanding officers and supervisors to set aside a day to address extremism. The Navy planned on Nov. 6 to christen the future USNS Harvey Milk, the late member of the San Francisco Board of Supervisors and California’s first openly gay public official. Milk was assassinated in November 1978.

Said Pittard, “I think President Biden picked a good person for the job and know he’s up to the job.”