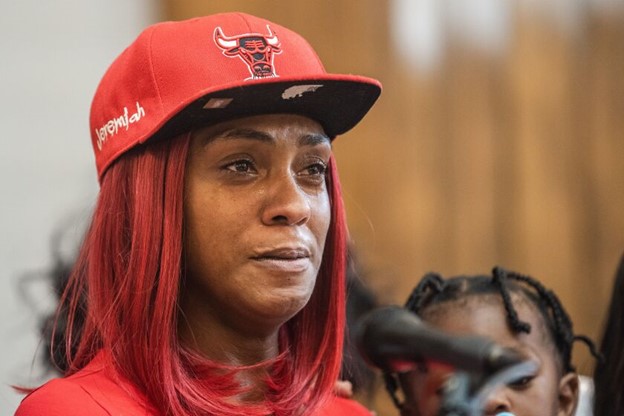 Ollie Jean Holiness remembers the “constant gunfire” that seemed to come from everywhere, trapping her and her family in a van less than a minute from their home in East Chicago.

“My son thought he heard fireworks,” said Ollie Holiness. “It threw me off at first, but then I realized we weren’t hearing fireworks. We were hearing gunfire — we were undergoing actual gunfire.”

Bullets pierced the driver’s side door and the back of the van, one of them hitting her other son, 7-year-old Jeremiah Moore, in the back of the head as he slept, killing him.

A week later, the mother of six faced the public at a Rainbow PUSH news conference on Wednesday and pleaded for anyone with information to step forward.

“I really just want justice for my son,” said Holiness. “Cold blooded murderers ambushed my car. A piece of comfort will come from knowing that the people who hurt my baby, and could’ve hurt the rest of us, are behind bars.”

As Holiness spoke, East Chicago police reported little new about the shooting that occurred around 1:15 a.m. July 12 as the family crossed the intersection of Gutherie and Main Street.

Holiness said she remembers being cutoff and surrounded by cars when a red Dodge Charger suddenly rushed to the side of the family’s van and gunfire erupted. The family had seen the same red car moments earlier at a gas station, she said.

“I thought nothing of it,” said Holiness. “I’m not from here, so I wasn’t assuming that the car was pursuing me.”

East Chicago Police Chief Jose Rivera said investigators have a few leads in the case but are not planning to release any information at this time.

Holiness, who is six months pregnant, said she moved her family to East Chicago from the South Side hoping to avoid gun violence. The tight-knit, family-friendly community she found in East Chicago added to the appeal, she said.

“It was my understanding that the neighborhood was quiet and that nothing really happened there,” Holiness said. “I always saw kids outside with the neighbors watching the kids. To me it was a loving place, and for this to happen on just the other block from where I live … I lost all hope in this community.”

But she added that she has not lost confidence in the East Chicago Police Department, and in fact would like to pursue a career as an officer in Chicago. She holds a concealed carry license and had a gun in the van at the time of the shooting.

While she waits for more information, Holiness plans to stay with Jeremiah’s grandparents.

Relatives have said Jeremiah loved to play video games with his father and loved football. About a month ago, he was in downtown Chicago for a protest over gun violence against children.

“If there’s one thing that Jeremiah did love, he loved coming home to his mom and dad,” she said. “That’s something he’ll never be able to do again. I just want justice for my son.”

Anyone with information is asked to call the anonymous tip line at 219-391-8500 or to visit the East Chicago Police website.