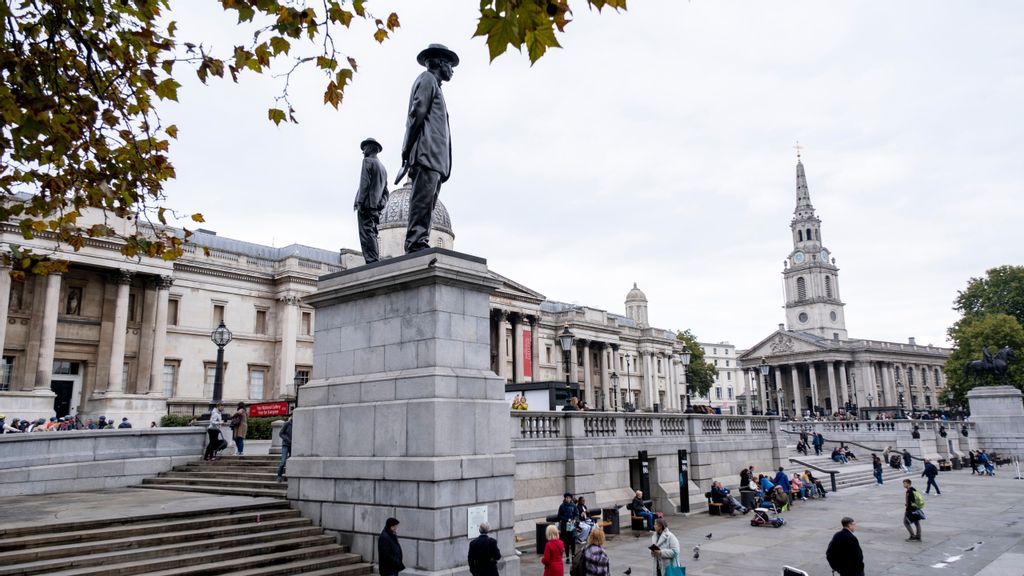 LONDON— A new statue in London’s iconic Trafalgar Square has sparked an unlikely controversy. At center stage is the life of Baptist preacher John Chilembwe, a Malawian national hero.

After completing a religious education in the United States, Chilembwe returned to his East African homeland, where he was killed leading a rebellion against British colonial authorities during World War I.

The statue named “Antelope” was completed by Samson Kambalu, an associate professor of fine art and a lifelong fellow at Magdalen College, Oxford University. Like Chilembwe, Kambalu was born in Malawi.

The last known photograph of Chilembwe was taken in 1914, and this statue aims to reimagine that photo in a novel way. In the photo, Chilembwe stands next to British missionary John Chorley for the opening of Chilembwe’s new Baptist church.

“Chilembwe is wearing a hat, defying the colonial rule that forbade Africans from wearing hats in front of white people, and is almost twice the size of Chorley,” said the government of London in a media statement describing the statue. “By increasing his scale, the artist is elevating Chilembwe and his story, revealing the hidden narratives of underrepresented peoples in the history of the British Empire in Africa, and beyond.”

“I am a Chewa myself like him,” Kambalu said in an interview. “I’m also a contemporary artist. I learnt from him in how you translate aspects of African heritage into the modern.”

While Chilembwe was a member of the Chewa ethnic group, his brief rebellion drew widely from a number of ethnic groups, including the Yao, Lomwe, Nyanja, Chikunda, Ngoni and Tonga. Indeed, there are other pan-African echoes in his life. One incident that led Chilembwe toward the path of rebellion was his shock at the British colonial authorities’ lack of compassion for the plight of refugees who had arrived in Malawi from neighboring Mozambique following a famine there in 1913.

Unusual for his time, Chilembwe studied in the United States at the Virginia Theological Seminary in Lynchburg, Virginia. Briefly the capital of the Confederacy at the end of the Civil War, the city had bounced back during Reconstruction. At the time of Chilembwe’s arrival, it had become one of the wealthiest in America. The Virginia Theological Seminary, which was founded in 1886, began admitting Black students in 1900.

Chilembwe had arrived there after coming under the spell of Joseph Booth, an English missionary who played a key role in the spread of various Christian denominations in Nyasaland and South Africa. Booth was affiliated with Baptist, Seventh Day Baptist and Seventh-day Adventist churches during his career as a churchman. He also served as a missionary for the Watch Tower Bible and Tract Society of Pennsylvania.

Ultimately, Booth would be forced to leave both territories by British colonial authorities due to his radical teaching. Booth held unorthodox religious views, including that the Sabbath should be observed on Saturday, not Sunday. Booth at one point predicted that by 1914 European colonialism would end in Africa, and independent Black nations would achieve unity with Black people in America. Booth spent much of World War I preaching pacificism outside of Africa, so he had no role in Chilembwe’s uprising. Yet, there is no doubt his ideas and support had a strong impact on Chilembwe’s own worldview.

While studying at what is today the Virginia University of Lynchburg, Chilembwe was exposed to the ideas of African American thinkers like Booker T. Washington, Frederick Douglass and potentially William D. Dubois, as well as the ideas of America’s Founding Fathers and the militant abolitionist John Brown.

When Chilembwe returned to Africa, his efforts were supported financially by the National Baptist Convention — one of the two largest Black Baptist groups in the United States at the turn of the 20th century.

Yet, Chilembwe soon found a unique voice as a preacher. Historians have debated to what extent millenarianism — the belief in a coming 1,000-year reign of Christ on Earth — and other religious ideas influenced his thinking. British authorities accused him of wanting to create a theological state in the Malawian highlands in the aftermath of the rebellion.

Chilembwe spent most of the rebellion at his church in near-constant prayer. While being pursued in the aftermath of the uprisings, he was shot and killed. Malawi gained its independence in 1964 and embraced Chilembwe as a national hero. His image was unveiled on its currency and the annual launch of the uprising is a national holiday.

Over 100 years after his death, the interpretation of his life remains a contested issue — as a campaign against the statue has unveiled. A “Save Our Statues” campaign petition against the monument has thus far attracted some 2,000 signatures.

Indeed, the debate over the statute of Chilembwe is part of a larger ongoing debate in the United Kingdom regarding public displays related to its imperial history that flared up in the wake of the death of George Floyd in 2020.

“Putting up a statue of John Chilembwe, ‘whose bloody rebellion targeted civilians and who preached beside the decapitated head of one victim’ is obscene,” said Father Marcus Walker, the rector at Great St. Bartholomew’s in London, in a tweet.  While that claim is historically accurate according to subsequent investigations by British colonial authorities, Chilembwe was himself not involved directly in the killings or most of the rebellions military operations, instead opting to spend most of the revolt inside his church. By then the rebels had realized their rebellion had failed to create a broadly popular uprising.

Giles Udy of the Keston Institute, which is dedicated to the study of religion in communist countries, pointed out that the grandchildren of those killed during the rebellion are still alive in a tweet criticizing London Mayor Sadiq Khan for permitting the statue.

For his part, Kambalu took to Twitter on Nov. 16 to deny that the statue was meant as a monument while on a visit to the Holy Land. “I have no interest in monuments,” he said.

While the controversy has subsided online in the weeks since the statue’s unveiling, the statue will remain in place until 2024, when it will be removed from its place on Trafalgar’s Square’s Fourth Plinth.

The Fourth Plinth was completed in 1841 and was originally meant to house a statue of the monarch and head of the Anglican church — King George IV. However, this never happened due to a lack of funds. The plinth has been the site of rotating works of art since 1999, including several prior works with religious themes. Notably, Ecce Homo featured a statue of Jesus Christ in 1999 and a statue of an ancient Assyrian deity from 2018 to 2020 – a reference to the many ancient works of Mesopotamian art destroyed by Islamic State group terrorists.

“Antelope” will remain atop the plinth until 2024, when it will be replaced by “850 Improntas” by Mexican artist Teresa Margolles, which features “life masks” of 850 transgender people from around the world arranged in the manner of a Mesoamerican “tzompantli,” or skull rack. Where “Antelope” will be moved to remains unclear.

Produced in association with Religion Unplugged.

The post Controversy After Statue Of US Trained Preacher Unveiled In London  appeared first on Zenger News.