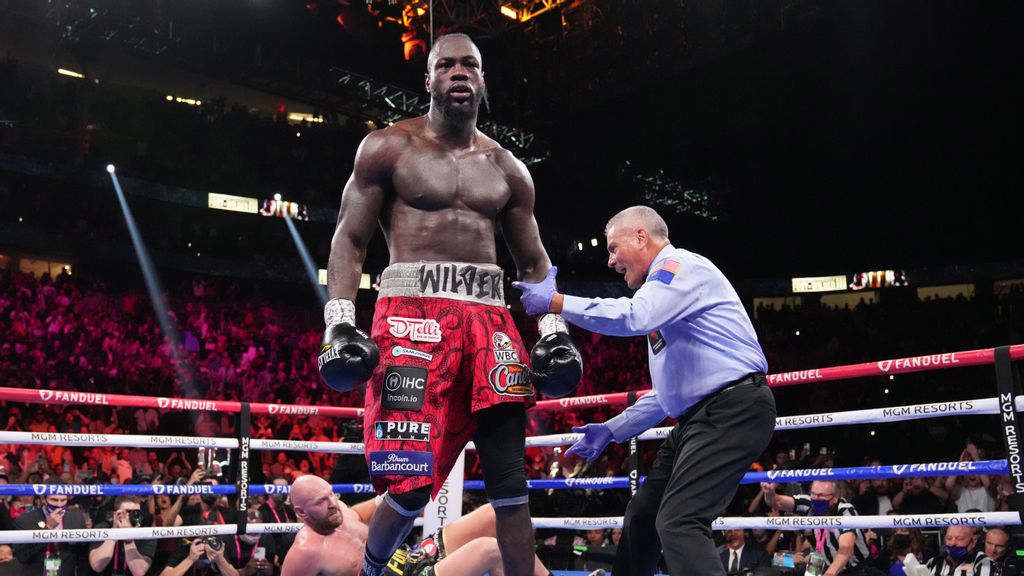 Deontay Wilder likely broke his powerful right hand in the fourth round while twice flooring Tyson Fury during his 11th-round TKO loss on Oct. 9

Wilder underwent a 90-minute surgery on Monday in Atlanta to repair the hand’s metacarpal bone nine days after he was dropped once each in the third, 10th and final rounds, and was ultimately stopped by the WBC heavyweight champion “Gypsy King,” both his co-manager and trainer confirmed to Zenger.

“I believe he broke his hand in the fourth round when he knocked Fury down twice,” said trainer Malik Scott, who texted Zenger, “Hey, surgery went well. Deontay is in recovery as we speak,” on Monday.

“I wouldn’t be surprised if it was during the first knockdown when he really turned everything over and delivered that punch. But it is what it is. Deontay’s right hand was hurt, but he just fought through it.”

“Deontay is not sure exactly if it was a punch to the head or an uppercut, but he broke his right hand at the metacarpal bone behind the third knuckle,” co-manager Shelly Finkel told Zenger on Sunday in advance of a procedure by Dr. Saadiq El-Amin of the Orthopaedic Sports & Medicine Institute in Lawrenceville, Ga.

“The doctor called me afterward and told me that the surgery went well. Deontay will be out for about three months, and then we’ll look at returning in the spring of next year.”

In two previous meetings, Fury rose from ninth- and 12th-round knockdowns during a December 2018 draw with Wilder before dethroning him via two-knockdown, seventh-round TKO in their February 2020 rematch.

Before the draw with Fury, Wilder suffered a break in his right arm during sparring 12 weeks out. Wilder said he was unable to gain full extension during the bout, revealing that injury a week after their bout.

Wilder suffered a torn left biceps during his initial loss to Fury that required surgery and therapy. Wilder revealed that injury during an interview after the fight on the Premier Boxing Champions’ podcast.

“The first fight with Fury, the draw, Deontay had to use one hand in training camp the entire time. The second fight was the torn bicep. “But this last fight was the first time Deontay entered the ring at his best against Tyson Fury,” said Scott, who became Wilder’s head trainer in the final bout of their trilogy.

“I predicted that Tyson Fury would be knocked out within the first five rounds, and Deontay almost did it in the fourth round. But to his credit, Tyson Fury got up, beat the bell ending the fourth, and came out victorious.”

Wilder, aka “The Bronze Bomber,” has had several injuries throughout his career to his arms and fists, dating back to a 90-second TKO of Travis Allen in his seventh professional fight in August 2009.

Wilder required separate surgeries to repair a broken right hand and torn biceps in the same arm suffered during a July 2016 eighth-round stoppage of Chris Arreola. The dual surgeries followed a brief procedure on July 21 to help stabilize the hand.

Including the Arreola fight, at that point Wilder had broken his right hand at least three times in seven years, having had metal pins inserted after an injury suffered against Allen.

Wilder then refractured the hand against Bermane Stiverne in January 2015, when he won the world title with a unanimous decision to become America’s first heavyweight champion since Shannon Briggs in 2007 — but didn’t have surgery following the second break.

“Deontay has done a lot of damage in the heavyweight division, but no fighter ever enters the ring at 100 percent,” Scott said. “All of Deontay’s breaks have come from throwing that right hand as hard as he does. Everybody who has felt it knows the impact that his right hand carries.”

In spite of his ailments, Wilder had recorded seven straight knockouts before battling to the draw with Fury, and he has knocked down or stopped every man he has faced as a professional.

“I’m sure it will take Deontay three or four months to recover, but he won’t be fighting until the middle of next year anyway,” Finkel said. “If Deontay says ‘Give me the winner of [Oleksandr] Usyk and [Anthony] Joshua,’ I would say, ‘fine.’ If he said give me [Andy] Ruiz or a fourth fight with Fury, I would say, ‘of course’’”

Scott believes that a return to light training might be the best therapy for Wilder.

“If it’s up to me, Deontay will get some rest while his hand is casted up, and then we can start some very light shadow boxing with the left hand to keep him active,” Scott said.

“Deontay is a top boxer who is always one fight away from fighting for the title again. So it looks like he can return sometime after February, if not next spring, depending on the plan we come up with, meaning myself, Shelly Finkel and [co-manager and assistant trainer] Jay Deas.”

Wilder could not be reached for comment, although he released a statement on social media late last week.

“Although I wanted to win, I enjoyed seeing the fans win even more. Hopefully I proved that I am a true warrior and a true king in this sport,” Wilder said, in part.

“Hopefully we proved that no matter how hard you get hit with trials and tribulations, you can always pick yourself up and to live and fight again for what you believe in. Last but not least, I would like to congratulate the ‘Gypsy King’ for his victory and I thank you for the great historical memories that will last forever.”

Edited by Stan Chrapowicki and Matthew B. Hall

The post Deontay Wilder Had Surgery On His Right Hand After TKO Loss To Tyson Fury appeared first on Zenger News.

PrevPreviousChicago Bears brush off Aaron Rodgers’ ‘I still own you!’ taunt — ‘Let’s face it, he’s not totally wrong’ — while even Tom Brady is making jokes at their expense
NextIllinois school safety helpline launched statewideNext