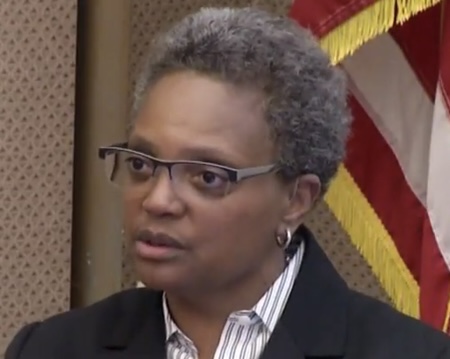 Mayor Lori Lightfoot on Thursday sloughed off the growing field of challengers lining up to deny her a second term and said she will officially join the fray next week.

“Stay tuned. Soon. Soon is shrinking. As in next week,” the mayor said at an unrelated news conference when asked when she would launch her re-election campaign.

One day after Ald. Roderick Sawyer (6th) entered the race with an attack on the incumbent’s “mean-spirited” and “uncollaborative” style of governing, Lightfoot took the growing field in stride.

She never mentioned that Sawyer, 59, is her hand-picked chair of the City Council’s Committee on Health and Human Relations. Sawyer is the fifth candidate and third African American seeking to deny Lightfoot a second-term.

“Another day, another man who thinks he can do his job better than me,” the mayor said.

“I’m just gonna keep doin’ my work. I’m not gonna worry about folks who are jumping in. I feel very comfortable with the list of accomplishments. What I’ve got to do is just keep telling our story.”

By “our story,” Lightfoot says what she really means is “the story of Chicagoans.”

“I feel confident that, as we tell that story and more and more people start to hear it—and frankly, the testimonials from the people that have been helped—we’re gonna be in very good shape.”

Last year, Lightfoot appeared on WTTW-TV’s “Chicago Tonight” program. She claimed then that “99%” of the criticism leveled against her — particularly targeting her demeanor, management style and revolving door of top aides — was because she is a Black woman.

On Thursday, the mayor was asked whether she believes anything has changed since then.

“People who are part of the LGBTQ+ community in leadership are judged through a different lens. That’s just the reality of life in America. I’m a big believer in playing the cards that we’re dealt. And I’m gonna keep doing what I think is right on behalf of residents of the city.”

Sawyer said Lightfoot’s sexism claim is false and hardly “worthy of a comment.”

“There’s too many important things going on right now for us to waste time going back-and-forth on what she feels — that somebody is picking on her. That’s not the case. I don’t have time for that. Let’s talk about issues. Let’s not talk about personalities,” Sawyer said.

Lopez called the mayor’s sexism claim a complete crock, accusing Lightfoot of “trying to hide from her own inequities.”

“It’s absolutely disrespectful to all women — particularly women of color — who have faced real racism and sexism to hear the mayor’s statements,” he said.

Ray Lopez running for mayor; City Council critic to give up seat to challenge Lightfoot

“Are we safer? No. Are city services better? No. Is our police department up to speed? No. These are things that have all happened under her tenure. That she is responsible for. Not to mention that it was under her tenure that started the inflation-based, automatic [property] tax increases for the next 50 years. That is something that was her doing,” Lopez said.

“To continuously blame the results of her policies on race or gender is disrespectful to those who have truly faced those demons head-on.”

In late April, Lightfoot delivered a speech to the City Club of Chicago that laid the groundwork for what’s likely to be an uphill battle for a second term.

She claimed Chicago was poised for “the best economic recovery of any big city in the nation, bar none,” in spite of “what the naysayers” have to say.

She buried that audience of movers and shakers in statistics to bolster her claim that Chicago already is on the rebound.

The mayor made passing mention that day to the carjackings, shootings and homicides that worry Chicago residents, employees and visitors. Polls show the unrelenting crime wave is foremost on the minds of Chicago voters.

But even on that front, Lightfoot maintained Chicago is “trending in the right direction,” though “more needs to be done.”

Recent polls by other declared and potential mayoral candidates and for the City Council’s Black and Hispanic caucuses show Lightfoot’s public approval rating below 30%.

But Lightfoot’s City Club speech included the narrative she plans to use to turn the tide in her favor.

“I will challenge you to find another mayor who has had to address the kinds of challenges that I have in the last three years. I don’t think you’re gonna find it because it’s an unprecedented set of challenges: A pandemic, historic economic meltdown, civic unrest, spiking violence … all happening within about a six-month period. … There was no honeymoon period for me coming in as mayor,” Lightfoot said.

“Many of you say, ‘the mayor doesn’t get along with people.’ Well, look at the results and report on that, you folks who like to write about the challenges and how the powers of the incumbency won’t benefit this mayor. What I would say to you is that we get stuff done. We get stuff done because we build relationships and partnerships that enable us to do that.”