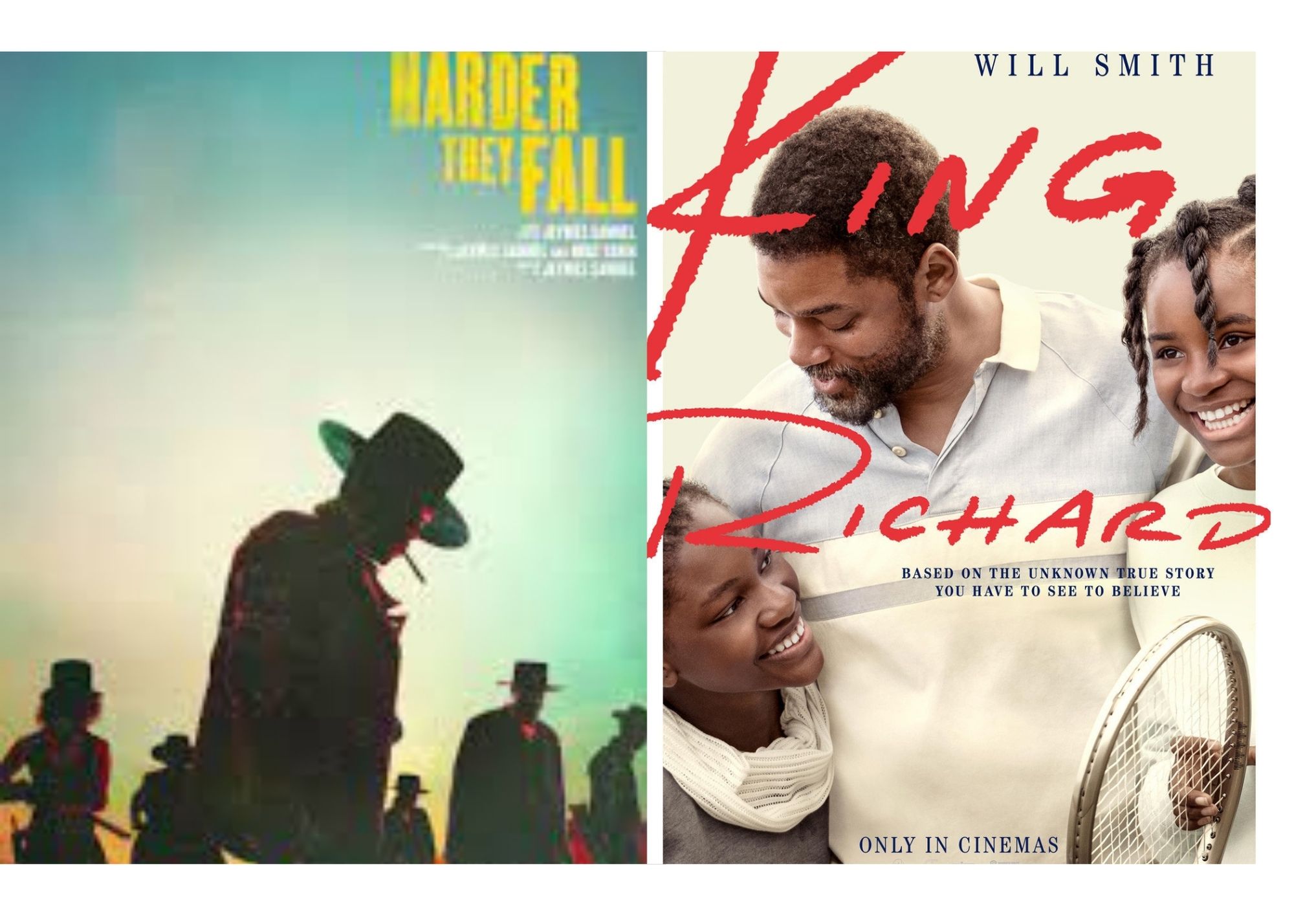 The proliferation of streaming services and the growth of cable, as well as the willingness (or necessity) of broadcast television and film to welcome more diverse stories has made this a prime era for Black cultural content in all areas, especially historical and biographical material. That’s the direction of two current projects that are intriguing, if also, flawed. These are Netflix’s “The Harder They Fall” and  “King Richard,” which are both in theaters and on HBO Max. One blends and sometimes blurs reality and fiction, while the other offers just a slice of a complex, amazing story.

Writer, director and musician Jeymes Samuel made some important decisions regarding ‘The Harder They Fall.” One was to make actual individuals the focal point in an otherwise fictional premise. Nat Love, Rufus Buck, Stagecoach Mary, and Cherokee Bill — characters played by Jonathan Majors, Idris Elba, Zazie Beetz, and LaKeith Stanfield, respectively — all made their mark in the West, and there are plenty of reference volumes and material available that documents their lives and exploits.

A second was to avoid the standard heroes/bad guys saga, though the revenge tale is equally a western staple. But when a young Nat Love meets fellow outlaw Rufus Buck through the murder of his parents, it sets the stage for his ultra-violent quest to avenge this horrific wrong. That Love chooses to become an outlaw takes things down a different road, along with his pattern of targeting other outlaws. Majors brings a host of charm and charisma to the character, and makes Nat Love an edgy, unpredictable and ultimately a deeply moral one despite being an outlaw.

The same is true for Elba’s Buck. Though he doesn’t hesitate to wipe out those in his way, Buck has noble goals at the foundation of his bloody exploits. He wants to build a utopia for Blacks in the West devoid of injustice and hatred. Others who contribute outstanding performances include Regina King as “Treacherous” Trudy Smith, Stanfield’s Cherokee Bill, Edi Gathegi’s Bill Pickett and RJ Cyler’s Jim Beckwourth.

There’s some nice comic touches injected at various points, plus a soundtrack that’s part spaghetti Western, part contemporary pop, hip-hop and even reggae.  Jeymes chose not to have racial slurs included in the dialogue, a move some purist fans feel weakens the script’s accuracy. But what he has successfully done is adapt some conventions and embellish them with 21st century sensibility, mood and nuance. “The Harder They Fall” is a superbly acted drama, one that celebrates the frontier genre without embracing all its stereotypes and cliches.

Reinaldo Marcus Green’s “King Richard,” despite a compelling performance from Will Smith, isn’t able to overcome some of the problems inherent with any biopic, particularly those that spotlight lengthy and complex people and events. The notion that an inexperienced tennis coach, in this case Richard Williams, could develop essentially on his own two incredible players. one of whom became arguably the greatest in the sport’s history, seems ridiculous. Showing how it happened, and trying to detail all the obstacles and political issues the Williams’ sisters emergence both created and overcame would take a documentary series to fully present. “King Richard” only covers a brief period in their amazing story.

Zach Baylin’s script and Smith’s charismatic portrayal present a portrait of a driven man. He recognizes early his daughters’ talent, and understands that no one else, particularly anyone in the country club world of tennis, is going to take either him or his daughters seriously. But what becomes a crusade on his part leads to early trouble in his community. One neighbor even calls social services to complain that Richard and his wife Oracene, nicely played by Aunjanue Ellis, are mistreating their children.
Indeed Oracene stands throughout the film as the counterpoint to Richard. She doesn’t mind challenging his cliched rhetoric, or pointing out his failings. Indeed near the conclusion she rips him about his failed business and the children he has had with other women. This is material that’s neither commendable or often mentioned in stories about Richard Williams, but its inclusion in this film, one incidentally both Serena and Venus helped make and screened prior to its release, adds a messy but real component. Sadly, the Williams divorced in 2002.

The film’s best parts show Richard Williams confronting the whites ruling the tennis world without fear, not only coaches, but also agents and sneaker executives. While the coaches Paul Cohen (Tony Goldwyn) and Rick Macci (Jon Bernthal) aren’t depicted as necessarily racist or evil, just anxious to preserve their standing, white parents don’t come off so well. The ones shown tell their children to cheat and denigrate them when they’re defeated by Serena and Venus.

Anyone who comes to “King Richard” seeking or expecting insider information on tennis, or wants the focus mainly aimed at what happens on the court will be disappointed. Demi Singleton and Saniyya Sidney as Serena and Venus do serviceable jobs of demonstrating the sisters’ early athletic potential.

They also show how their determination and perseverance enabled them to overcome the doubts of the tennis elite. But this is first and foremost a character study of Richard Williams, with some attention also paid to  Oracene, but the bulk spotlights him and his role in shaping two tennis giants.
Great feature films can certainly still and should be made that shift the spotlight to Serena and Venus, and cover their meteoric rise to stardom. But right or wrong. that’s not the intention of “King Richard,” and this is far from the definitive story of their remarkable careers someone should make.

Ron Wynn is currently the sports and entertainment editor for the Tennessee Tribune, a columnist for the Tennessee Jazz and Blues Society and editor-in-chief for the online media company Everything Underground. He is co-host of the radio show “Freestyle” on WFSK-FM and has been nominated for contributions to Grammy-winning music.