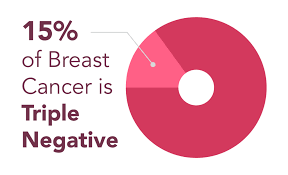 The research community is thinking outside the box when it comes to one particularly deadly form of cancer that more often attacks Black women.

Triple-negative breast cancer (TNBC) is aggressive and more prevalent in Black women under 40 or those who have a mutation of the BRCA1 gene, which suppresses tumors and prevents breast cells from growing uncontrollably – and Black Americans have unique BRCA1 variants. As a result, TNBC is more common in Black women than women of any other ethnicity. In fact, researchers at the University of Pennsylvania reported last year that Black women have an almost three-fold increased risk of TNBC.  The disease affects about 13 of every 100,000 people each year, according to the Cleveland Clinic.

“Triple-negative breast cancer in African Americans has a higher mortality rate at a more advanced stage at the time of diagnosis so that there are larger tumors that have spread to other parts of the body,” said Dr. Edith Mitchell, clinical professor of medicine and medical oncology at Sidney Kimmel Cancer Center, Thomas Jefferson University in Philadelphia.

“Tumors are more aggressive, they spread faster, they don’t respond to treatment as well and consequently the woman is at risk,” Mitchell told Black News & Views.

The disease is called triple-negative breast cancer because the tumors lack three receptors or surface molecules typically found in breast cancer. Doctors use these receptors to assign a treatment or treatments.

The federal Centers for Disease Control and Prevention in Atlanta describes TNBC this way: Think of cancer cells as a house.  To get inside the house to destroy the cancer, you’ll need to open three locks, or receptors.  One lock is for the female hormone estrogen, another is for the female hormone progesterone, and the third represents a protein called human epidermal growth factor, or HER2.

If the cancer tests positive for any one of these three locks, there are treatment options, such as hormone therapy or drugs  to destroy the cancer cells. But if a woman has triple-negative breast cancer, the tumor cells do not have estrogen, progesterone and HER2 receptors, so doctors have fewer keys for treatment.

Be open to possibilities

Pushing away negative thoughts and finding experts who specialize in TNBC is key for Black women facing this diagnosis, said Mitchell of the Kimmel Cancer Center.

“Finding a health care team where there is a radiation doctor, a medical oncologist and an experienced surgeon is absolutely necessary for all three to get together, develop a treatment plan together so that the patient has the most effective use and the combined modality therapy of all three specialties,” Mitchell said.

Thinking outside the box helps too, according to the physician.

“I have triple-negative breast cancer patients that have survived 20 years or more and they had advanced cancers, but they went on clinical trials, they took the new treatments and we worked with the patients,” Mitchell said.

Clinical trials of research drugs can give patients with challenging illnesses hope in reversing a poor prognosis. About half of the adult cancer patients who offer themselves as research subjects live a long time after their diagnosis, according to the American Society of Clinical Oncology.

Trials can help patients as well as medical science. Researchers are finding that not only new drugs, but also old drugs can be effective, the doctor said.

Precision medicine and clinical trials should always be a part of the treatment plan, Mitchell said. This involves using the genetics and genome – or totality of genetic information about the patient – to help target treatment options.

“Patients who go on to clinical trials usually get medications early or may have involvement that studies the genomic profile of the tumor, the genetics of the tumor and therefore we learn more from precision medicine,” Mitchell said. “Individuals should opt for a center that uses precision medicine and ask the doctors about it and get as much information that you can.”

One of the treatments in this family involves the use of PARP (poly ADP-ribose polymerase) inhibitors, a substance that can block cancer cells from repairing their DNA, causing certain mutations to die.

Socioeconomic disparities, lifestyle, diet, weight and reproductive experiences such as having children at an earlier age can disproportionately predispose Black women to TNBC, Mitchell said.

Profile of the TNBC patient

Socioeconomic disparities, lifestyle, diet, weight and reproductive experiences such as having children at an earlier age can disproportionately predispose Black women to TNBC, Mitchell said.

A profile of who tends to get TNBC is becoming clear through research, according to Dr. Otis Brawley, professor of oncology and epidemiology at Johns Hopkins University School of Medicine in Baltimore.

He said the research on who tends to get triple-negative disease and why is clear.

“We know that having lots of children also increases risk of triple negative later on,” Brawley continued.  “And we find that women who have triple negative disease are more likely not to have breastfed.”

Brawley said this disease is not necessarily about being Black or white.

“This is not a race thing. Education causes people to not have babies and not having babies certainly before the age of 30 increases the risk of having breast cancer and the kind of breast cancer that you get is the better kind.  Black women do certain things or certain things are done to them that increase their risk of triple-negative disease and educated people who are overwhelmingly white do things that increase their risk of non-triple-negative disease.”

PrevPreviousAsk Amy: Cousin feels violated over childhood abuse
NextI learned the importance of self breast exams when I was in collegeNext