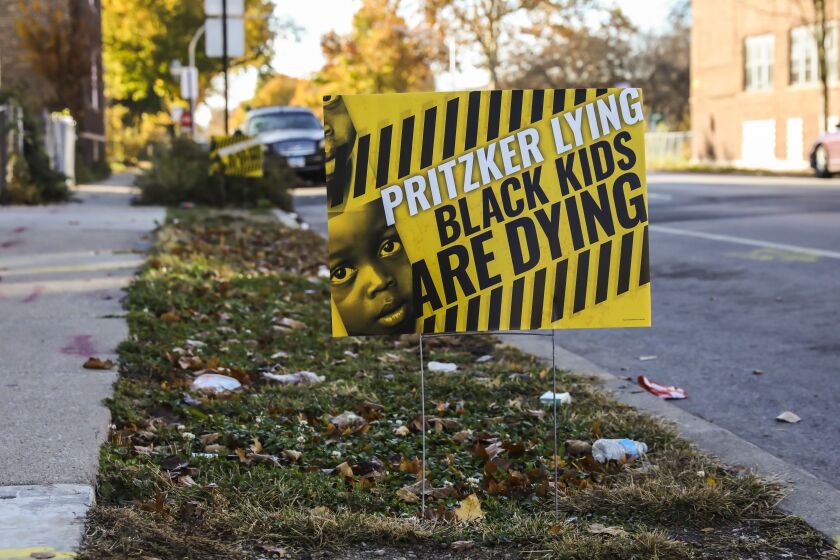 Signs distributed by an anti-Gov. J.B. Pritzker political action committee around the South Side. Political operatives say it’s an effort to suppress the Black vote.

It’s an old-school political technique — in the days before a vote, put election flyers under car windshield wipers. They are likely to be read since they are hard for a driver to ignore.

In a parking lot in Bronzeville last week outside the Lake Meadows apartments, a multitude of yellow flyers — designed to look like road warning signs — were on cars in this heavily Black and overwhelmingly Democratic community.

“Pritzker failed Black families. He must be punished,” screamed the headline about Democratic Gov. J.B. Pritzker.

The flyer goes on to slam Pritzker over crime, schools, jobs, taxes and cannabis licenses in Black communities — a conflation of city and state issues that includes distortions of the governor’s overall record. Other yellow signs planted around the city’s other major Black communities on the South and West sides hit Pritzker on crime, saying, “Black kids are dying.”

Though all the messaging is anti-Pritzker, there is no mention of his opponent in next week’s race, Republican nominee Darren Bailey.

The flyers and signs are bankrolled by the People Who Play By the Rules political action committee, launched last March and run by longtime GOP political operative Dan Proft, who is also an AM560 talk show host. Proft’s PAC — an independent expenditure committee — is financed by the Lake Forest mega-donor Richard Uihlein, one of the nation’s top contributors to conservative candidates and causes. As of Sunday, Uihlein has donated $24.8 million to Proft’s PAC. The PAC, under rules governing independent expenditures, is not supposed to communicate and coordinate with any campaign.

One interpretation could be that it’s just an attempt to persuade Black voters to support Bailey.

However, since the fear-mongering flyers and signs do not push Bailey’s candidacy, the strategy appears to be to depress Black voter turnout for Pritzker, political operatives said.

Lynn Sweet and Mariah Rush have more on the signs and the PAC here.