A year after his death, those who love Jelani Day are still seeking answers 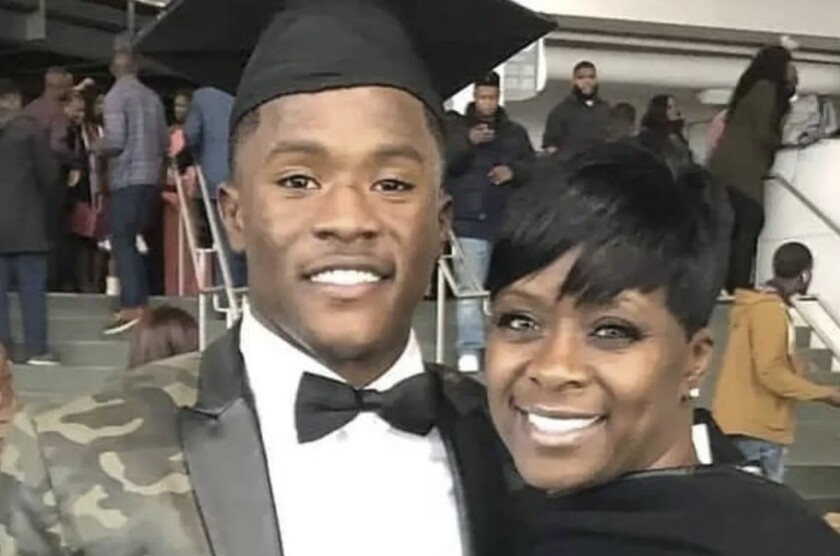 Nearly a year to the day since he vanished like a vapor, his lifeless body to be discovered days later floating in the muddy Illinois River in a former “sundown town,” family and friends gathered in downstate Normal on Saturday to remember Jelani Day.


They came to the campus of Illinois State University, where Jelani was just beginning his first year as a graduate student last August, most dressed in all-white. They gathered inside an elegant candle-lit ballroom filled with roundtables topped with white cloth and portraits of Jelani Day.

At ISU’s Bone Student Center, they celebrated the “life and legacy” of a son of Danville, dead at age 25.

To say his name. To let the world know that Jelani is not forgotten. And to launch — at the $50-ticketed event — the Jelani Day Foundation in the hope of helping others.

Purple, white and gold balloons lined the stage near a giant neon-lit white sign that read: “JJDay.” The sign was anchored by a big red heart and, nearby, a smiling portrait of Jelani, which shimmered golden in the light.

The Jelani Day Memorial Ensemble sings in honor of Jelani Day at a celebration Saturday at Illinois State University.

There were expressions of joy as those who knew and loved Jelani remembered him. For the way he smiled and cared for others. As friend, brother, son. They celebrated Jelani’s life in dance, words and song.

But inasmuch as the air was filled with celebration, memorials and purpose, questions surrounding the case swirled. And a mother’s heart remained broken over the still lingering mystery of her son’s death, which she believes was due to foul play. More than 365 days since her son disappeared, this much is clear: The pursuit to find out what really happened to Jelani continues.

“I don’t know what happened to Jelani,” his mother, Carmen Bolden Day, said in an interview last week. “I would not want another family to endure what my family has endured.”

Bolden Day, her family and others contend that someone knows what or who brought this handsome, promising young Black male graduate student to the town of Peru, population 0.4% African American, and 60 miles north of his college campus, where Jelani was studying to be a doctor.

“We know that Jelani did not kill himself. We are here seeking justice for Jelani,” said Jonathan Jackson, speaking at the event on behalf of the Rainbow PUSH Coalition. “What do we want? We want justice for Jelani.”

Jackson renewed a call for the Illinois Attorney General’s Office to investigate the case.

Through their nonprofit established in Jelani’s name, Bolden Day says she wants to provide help for other families in similar situations, including legal counsel, advice on securing press coverage and other assistance.

Jelani, who was studying speech pathology, was reported missing on Aug. 25, 2021. A day later, police found his car in a secluded, wooded area in Peru near the Illinois Valley YMCA. Nine days later, searchers found a body, later identified as Jelani, floating in the Illinois River near the Route 251 bridge, about two miles from where his car was found. On Oct. 25, the LaSalle county coroner issued a statement saying Jelani had drowned.

Carmen Bolden Day, Jelani Day’s mother, stands in front of a sign honoring her son at an event Saturday in his memory.

Bolden Day said law enforcement’s “investigation” into Jelani’s death to date has proven fruitless. She has serious questions about their commitment to the case. Bolden Day has remained vigilant, seeking evidence on her own.

A year later, she concedes that she is left with more questions than answers, and a collection of cellphone photos she snapped recently of Jelani’s car, a white 2010 Chrysler 300, still being held by police. She says Peru police officials on Aug. 17, allowed her to view her son’s car.

She was shocked to see it covered by a blue-gray tarp and left outside in the elements. The red police tape that investigators apparently had placed on the doors to seal them were all broken, she says. Inside the car, she saw a dollar bill in plain view, loose coins in the console, a pair of her son’s shoes on the floor, a T-shirt and shorts, mail and even a suitcase.

All there. Not bagged. Not tagged. Not in safekeeping in some police evidence room somewhere.

“It made me angry. Everything is just laying in his car as if they’ve just pulled it up,” she said. It’s like they keep smacking me in my face… like Jelani means nothing,” Bolden Day said.

For those who gathered Saturday in his memory, Jelani means everything.