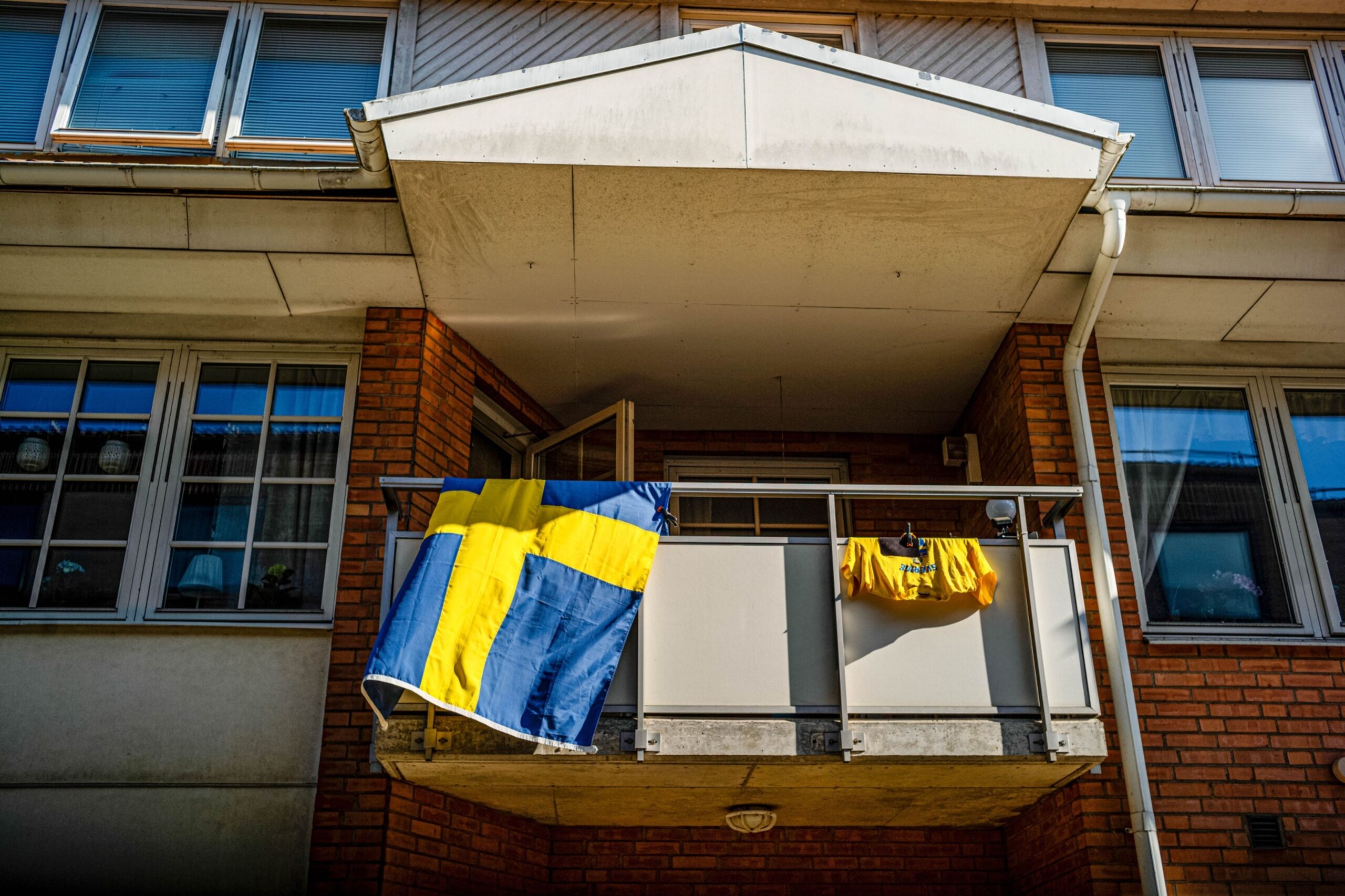 It didn’t take long for Chinedu to feel unwelcome in Sweden.

When he arrived from Nigeria in 2018, joining several hundred thousand Africans in a country of 10 million, at first he thought he’d found the tolerant, inclusive society that was regularly near the top of global rankings for quality of life and happiness. He enrolled in Malmo University and worked towards a Masters in international migration studies, made friends and got a job. But he said he and his family soon encountered racism, and he’s now so fearful for their safety that he asked not to be identified by his real name.

When Chinedu and his wife are out shopping, people tend to look the other way to avoid making any eye contact, he said. At school, he said kids shout at his children to “go home” and yell that “Blacks don’t belong here.” Following the gains of the far-right Sweden Democrats in September’s general election, he said he feels ever more uneasy in his adopted country.

“It happens nearly every day,” Chinedu said. “The impression I had is that you can come to Sweden and they won’t mind whether you are Black, White or Brown, but Swedish people are not comfortable with immigrants the way they used to be.”

Other people from Syria, Romania and Afghanistan said in interviews that they’ve encountered bigoted behavior and taunts, and worse, and none were willing to tell their stories on the record, fearful of reprisals. They all live in Klippan, a town surrounded by farms about an hour’s drive from Malmo in southern Sweden that’s become an SD bastion. One pastor from Nigeria said he got so fed up that he left and works in the Danish capital Copenhagen where it’s easier to blend in.

Big cities aren’t necessarily a haven for newcomers who don’t look “Swedish.” Across the country, one in four children with an immigrant background have been racially abused or attacked because of the color of their skin, where their parents are from or their religion, according to a recent report by the Swedish branch of the nonprofit Save the Children. Reported hate crime rose 20% nationally in the decade through 2018, the latest comparable data show. More than 3,000 cases were documented in 2020, though the real number is higher as many incidents aren’t reported.

At Snyggatorpsskolan, a school in Klippan, a third of 400 students have an immigrant background. Head teacher Marie Gardby says xenophobic rhetoric and misinformation flourishing on social media and the national debate is spilling into its corridors. Racial tensions between groups and individuals are a regular occurrence, resulting in mainly verbal attacks as well as physical altercations that go both ways.

Fostering interaction between students “is one of our most important tasks,” Gardby says. The school tries to do that in regular lessons, and through organized dialogues. The municipality also sends staff into schools to talk about these issues.

An undercurrent of racism has been at the margins of Swedish politics for decades. But now it’s become socially acceptable, said Bert-Inge Karlsson, a former politician in Klippan who left the center-right Christian Democrat party after it began opening up to the far right. “It’s no longer necessary to hide what your heart is full of,” he said.

Jonas Luckmann, head of the local branch of the Sweden Democrats, says there are no studies to prove that xenophobia or any form of racism has increased since the party’s gains in Klippan, arguing that instead “there may well be a general view that integration has failed and needs to be addressed.” He may face expulsion from the party, along with other colleagues, for having nominated two former neo-Nazis to posts on the municipal administration. SD has yet to make a formal decision and had no comment.

Sweden has long prided itself on being open to ideas, trade and people from around the world. Over the decades, it has provided a safe haven to Chileans escaping Pinochet’s dictatorship, Iranians after the Islamic Revolution and Kosovar Albanians from the war in the Balkans.

As civil conflict ripped through Syria, leading to an exodus that in 2015-16 became Europe’s biggest refugee crisis since World War II, Sweden opened its doors to more asylum seekers per capita than any other country in the region. Anxieties about identity combined with bigger worries about the strain on the generous cradle-to-grave welfare system that formed the heart of the nation since the 1930s. Successive governments failed to address these concerns. SD stoked them.

In September’s parliamentary election, there was just one municipality in the entire country where SD lost support, and 50 among 290 where the party garnered more than 30%. As well as pulling in disaffected voters from the traditional parties on the left and right, SD saw its share among 18- to 21-year-olds jump 10 percentage points to 22%, making it the second most popular political force for young people. It got more than 40% of the ballots in some informal school elections for children too young to vote.

While SD, which has neo-Nazi roots, is not officially in the government, it is the biggest force in the right-wing coalition and, for the first time, has considerable influence over policies on everything from energy to health care. Prime Minister Ulf Kristersson accepted its hardline approach to immigration in exchange for parliamentary support. From Jan. 1 the nation holds the rotating presidency of the European Union.

The hard right already governs in Italy, Poland and Hungary, and effectively leads the opposition in France, making Sweden part of a wider continental trend brought on by growing demographic and fiscal pressures. So Kristersson faces a formidable balancing act during Sweden’s six months at the helm of the bloc with Europe’s unity under stress from the biggest armed conflict since 1945 and the prospect of more people fleeing Ukraine.

Swedish ​​​Minister of Gender Equality, Paulina Brandberg, said her government will follow a national plan in place since 2016 to educate people, prevent hate speech online and push the legal system to combat hate crimes. The government will also seek to improve statistics to make it easier to track various forms of discrimination, she said. UN agencies have repeatedly criticized the country for not collecting data based on race or ethnicity.

“It is crystal clear that racism exists, and that we really need to do something about it and be on the offensive,” she said. “That is regardless of whether it is increasing or not.”

SD has blamed newcomers for a surge in gun crime and a growing gap between the rich and poor — for all Sweden’s economic strengths, concerns on the street are mounting, with a crashing housing market and the country at risk of falling into one of the worst recessions among the 27-member European Union.

Jimmie Akesson, meanwhile, has sought to broaden SD’s appeal since becoming the party leader in 2005, partly by trying to root out extremists but also by abandoning some long-held policies such as a demand for Sweden to leave the EU.

That formula helped Marine Le Pen in France and made Giorgia Meloni prime minister of Italy. And it’s a familiar dynamic in Sweden, too.

As a financial crisis left Swedish politics in flux in 1991, another far right party, the New Democracy, managed to whip up enough support to sweep into parliament with a 6.7% share of the vote, only to be ousted three years later when the economy improved. At the time, during its early days, SD attracted skinheads to raucous street protests and its youth wing became a kind of nursery school for young Swedish Nazis. Klippan was known at the time as being a hub for those views, and sympathizers from Germany and other nations moved in.

Unemployment in the town is higher than the Swedish average; the paper mill that was at the heart of the community for centuries is no longer the main employer, and locals now tend to mainly work on the hog, cattle and chicken farms, in smaller manufacturing plants or in construction as well as for the municipality.

For Linnea Ivinger who runs a clothing shop on the edge of the high street, SD appeals because of its focus on local issues as well as its tough stance on immigration. She said that there just aren’t enough job opportunities for the 3,000 foreigners who have made the town their home, representing roughly 18% of the population.

The arrival of so many people was a shock, said long-time store owner Lars Andersson. He said he was overwhelmed early on in the refugee crisis with the different languages, religions and cultures, and struggled to meet new demands for products from naan breads to spices. “It was very hard,’’ he said. “I would describe it as organized chaos.’’

His main concern is for his children. “For kids of nine, 10, 11 years to be using racial slurs, you know…it’s deep-seated,” he said.

–With assistance from Ott Ummelas and Anton Wilen.