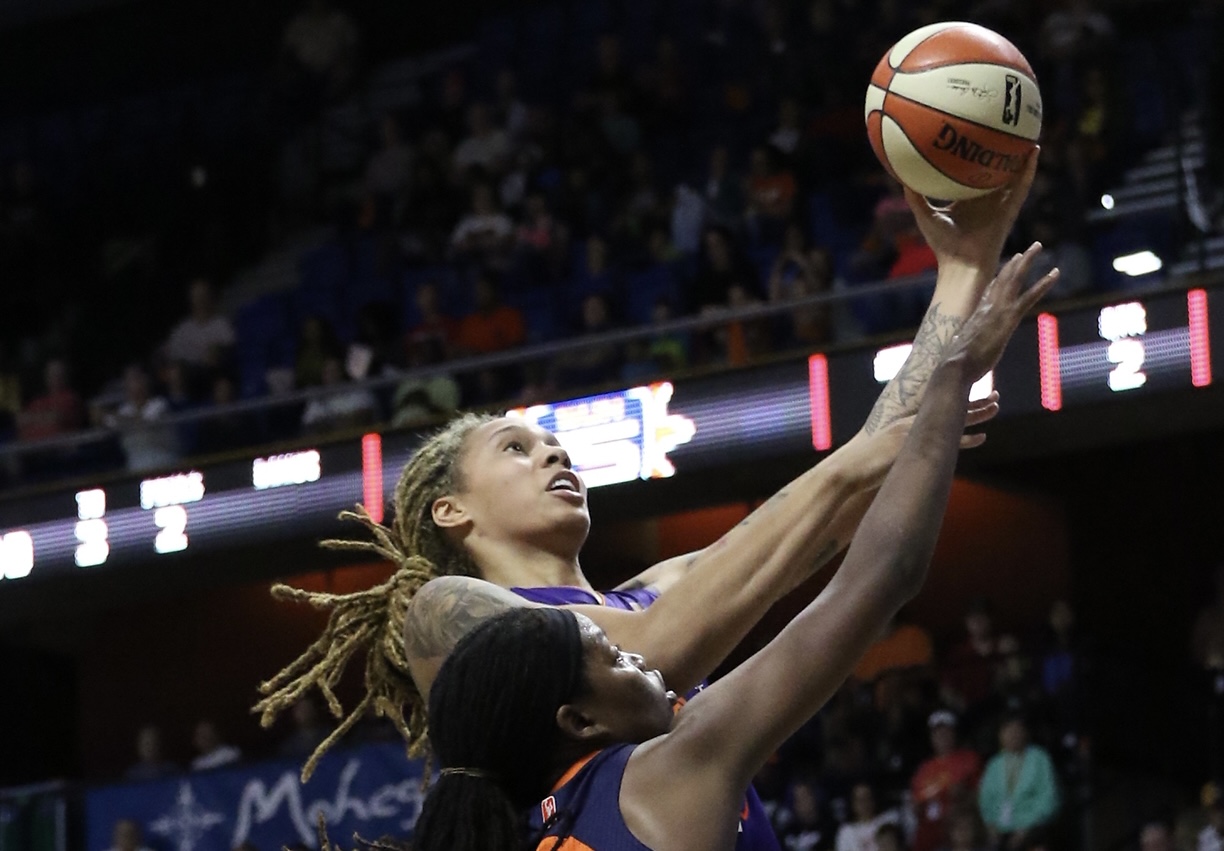 WNBA star Brittney Griner, detained for months in Russia on drug charges, has been freed from custody in a 1-1 prisoner swap with the United States, according to confirmation from the White House.

At about 8:40 a.m. ET, President Biden addressed the public from the Oval Office, saying, “She’s safe. She’s on a plane. She’s on her way home.” Griner’s wife, Cherelle Griner, and Vice President Harris stood behind the president.

“Brittney soon will be in the arms of her loved ones,” the president said. “These last few months have been hell for Brittney.”

Cherelle Griner also addressed the public, thanking a multitude of people and entities who have been working to free the Phoenix Mercury center, including Biden, Harris, Griner’s agent, the WNBA, the State Department, and more. She described her wife’s detention as, “one of the darkest moments of my life.”

Brittney Griner was flown to the United Arab Emirates, Biden said. From there, she was being flown to a U.S. military medical facility in San Antonio, Texas, NBC News reported. Griner is being freed in exchange for the release of Viktor Bout, a convicted Russian arms dealer, according to NBC.

Reaction to the news was jubilant and swift.

In a statement, U.S. House Speaker Nancy Pelosi, D-Calif., said Congress and the country were “overjoyed” about the news imvolving Griner.

“Today, our hearts are with her dear wife, Cherelle, and the entire Griner family as their beloved Brittney is safely on her way back to America and will be home for the holidays,” Pelosi said. “For nearly ten long months, Brittney Griner suffered unthinkable trauma as she was wrongfully imprisoned by the Russian government.  (Russian President Vladimir) Putin’s cruelty against Brittney – and his monstrous actions against Ukraine – are staggering reminders of his brazen contempt for human rights, human dignity and the rule of law.”

The Rev. Al Sharpton, New York-based activist and founder of the National Action Network, was among those who’d pushed the White House to negotiate for Griner’s release. In a statement, Sharpton said that after Griner’s nine months of imprisonment, her loved ones can finally breathe a “sigh of relief.”

“Today, we gladly applaud the administration for the hard work of ensuring Brittney’s imprisonment finally came to an end,” Sharpton said. “My prayers for her and her family remain as strong today as ever, because her journey is far from over. Brittney returns home with spiritual and emotional wounds that can only heal now that she’s free. I and the ministers who were denied access to see her in Russia look forward to meeting her here, so we can finally pray over her and offer her spiritual guidance. We also continue to pray for the release of Paul Whelan and all U.S. citizens detained abroad.”

Earlier Thursday, Biden posted photos on Twitter of Cherelle Griner with him and Vice President Harris in the Oval Office, tweeting: “Moments ago I spoke to Brittney Griner. She is safe. She is on a plane. She is on her way home.”

The 31-year-old Griner was detained at a Moscow airport in February and pleaded guilty to cannabis possession on July 7. In late July, Griner testified that she has a legal prescription for cannabis for help with chronic pain. The celebrated center for the Phoenix Mercury and Olympic gold medalist also has said that she packed in a hurry and had no intention to break Russian law.

“I made an honest mistake,” Griner said in testimony in the courtroom.

A Russian court convicted Griner in August and sentenced her to nine years, and one day later, the Kremlin said it was willing to negotiate her release. Russian Foreign Minister Sergey Lavrov told reporters at the time that he was “ready to discuss” a potential prisoner swap.

“Today, American citizen Brittney Griner received a prison sentence that is one more reminder of what the world already knew: Russia is wrongfully detaining Brittney,” Biden said. “It’s unacceptable, and I call on Russia to release her immediately so she can be with her wife, loved ones, friends, and teammates.  My administration will continue to work tirelessly and pursue every possible avenue to bring Brittney and Paul Whelan home safely as soon as possible.”

The U.S. State Department said that it was in discussions with Russia over swapping Griner and Paul Whelan, another American imprisoned in Russia, for Viktor Bout, who was imprisoned at a federal facility in Marion, Illinois.

Griner, like several other WNBA stars, played for a Russian basketball team during the WNBA’s off season because the pay is much higher..

The case has drawn attention to the treatment of Black women overall and in the world of professional basketball. Griner was in Russia because – like several other WNBA players – she plays for a much higher salary with a Russia team during the WNBA off season.

Early on after Griner’s arrest, U.S. officials suggested that drawing attention to Griner’s case might make her more of a pawn in tensions between the United States and Russia. But last month, Griner’s wife said it was time to raise the volume on the push for Griner’s release. That increase precipitated the outreach from the White House.

She told the Rev. Al Sharpton on his radio show this past summer that she and her wife’s supporters intend to be relentless about pressing for her release.

Also this past summer, a close friend of Griner’s dating back to high school spoke at a prayer vigil for Griner in front of the Russian Consulate in New York.

“We already know that she still has six months no matter what,” Janell Roy, a friend who refers to Griner as her sister, told a crowd of about 30.

She said she routinely texted daily with Griner and that Feb. 17, 1:55 p.m., marks the last time she received a text from Griner, who told Roy she was afraid.