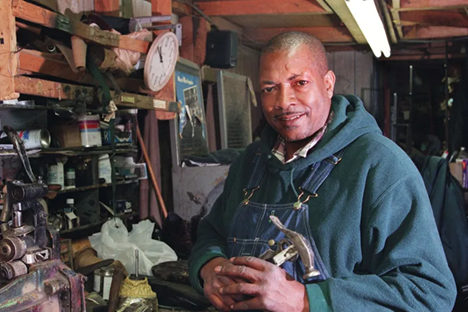 By Robert A. Davis
Chicago- Sun-Times

To James Cole, shining shoes was more than a living.

For nearly 60 years, Mr. Cole, the founder of Shine King, hired hundreds of people, giving first jobs to many and offering opportunities to at-risk kids and former inmates.

His business was successful enough to allow him to expand into real estate, roofing and tailoring.

Shine King — which sometimes was called Shoe Shine King — wasn’t just where people went to look sharp. Mr. Cole’s shops — which also repaired shoes — were places to network, shoot the breeze with friends and have a laugh.

Mr. Cole, 78, died Monday at West Suburban Hospital in Oak Park after taking ill during the night, according to his son Vernon, who helps operate the Shine King at 338 N. Central Ave.

“He was rushed to the hospital, but they weren’t able to bring him back,” Vernon Cole said.

Born in Humboldt, Tennessee, to sharecroppers Gertie and Vernon Cole, young James arrived in Chicago around ninth grade and went to Marshall High School on the West Side.

His entrepreneurial streak was evident early on. He worked for a welding company and at the Ford assembly plant at 126th Street and Torrence Avenue.

Besides those jobs, “He used to pick up bread crumbs and bring them to another company to make dressing,” his son said.

His first shoeshine spot grew out of his love for the game of pool.

“It was kind of like a hobby he had so he could shoot pool,” his son said. Mr. Cole would shine shoes outside a pool hall at Madison Street and Kedzie Avenue to make some money to gamble. “Once he got enough to play, he’d go in the pool hall.

“One day, he kept shining shoes, and he figured out he had more money doing that than doing his odds-and-ends jobs,” Vernon Cole said.

His first bricks-and-mortar business was at a record store at 3205 W. Madison St. He shined shoes outside but moved indoors when the weather got too hot or too cold. By 1964, he started renting the store himself.

He was in business at that location at Madison Street and Kedzie Avenue from 1964 to 1970. The shop was unscathed during the unrest saw left large swaths of West Madison Street burned down after the 1968 assassination of the Rev. Martin Luther King Jr.

“Him and his workers protected and saved the businesses on that corner,” moving their equipment out of those storefronts, his son said.

His mother had always wanted him to go to college. By 1969, he hired her. The year after, he hired his father to work for him, too.

A Bulls fan, Mr. Cole was a 25-year season ticket-holder. “He got to experience six championships,” his son said.

“Besides his work ethic, he loved his family,” he said.

He enjoyed blues and gospel and often played The Caravans, James Cleveland and The Mighty Clouds of Joy at work.

When Mr. Cole visited his shop in Austin on Saturday, “He told somebody I could live another 15 years,” his son said.

As big as he built his business, he could still shine shoes.

“Every once in a while, he’d do it to show us he still had it, and, trust me, he still had it,” his son said. “His apron is folded up the same way it was the last time he wore it.”