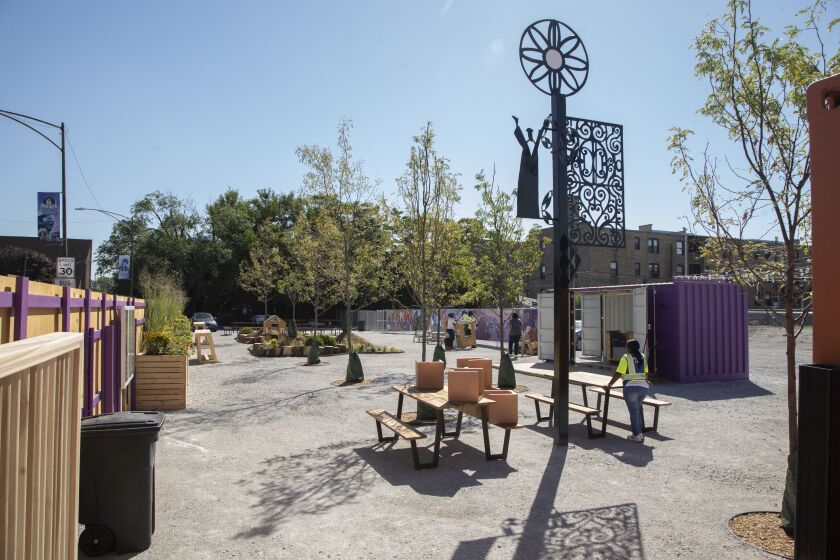 The fact that a South Side gospel singer inspired Martin Luther King Jr.’s “I Have A Dream” speech may surprise some Chicagoans.


Mahalia Jackson, often called “The Queen of Gospel,” frequently performed at King’s speeches, and before his famed address Aug. 28, 1963, at the Lincoln Memorial in Washington, D.C., she gave him some crucial words of encouragement: “Tell them about the dream, Martin.”


King then deviated from his written remarks. The result was his famous speech at the March on Washington.

Jackson, who died in 1972 at age 60, will now be honored with a memorial plaza being unveiled Friday in Chatham. The singer sold about 22 million records during an expansive 40-year career and was a fierce supporter of the civil rights movement.

Mahalia Jackson Court was created through a partnership between Carter Temple CME Church and the Greater Chatham Initiative. When complete, the once-vacant lot at 79th and State streets will include a 12-foot-tall monument, a small playground, a performance space and food court.

This three-foot-tall statue of gospel singer Mahalia Jackson, created by Chicago artist Gerald Griffin, will be unveiled Friday. It will be installed at Mahalia Jackson Court, a memorial plaza near 79th and State streets.

Friday at 3 p.m., a three-foot-tall bronze statue of Jackson will be unveiled at the site. That statue, created by Chatham artist and gallery owner Gerald Griffin, is just a stand in. Griffin’s working on a larger version for the 12-foot-high monument, expected to be installed next year, about the time the food court opens.

The memorial was funded by city grants through Chicago’s POP! plaza program. The project also received a $10,000 grant from Peoples Gas.

Mahalia Jackson at a civil rights rally in Solider Field in Chicago on June 21, 1964. She will be commemorated with a monument in Chatham.

Jackson, Fears added, “was the greatest singer of the 20th century. Her impact on the American music scene is just huge.”

As a longtime South Side resident, the gospel singer was high on community members’ list to commemorate once plans for the memorial took shape.

“We talked about some of the great folks who have emerged from the community,” Fears said. “The one that they wanted to lift up the most was Mahalia Jackson. There’s a variety of people have come out of the community. But Mahalia Jackson has a special place in their hearts. And they said, if they were going to commemorate anyone, it would be her. So it was what the community wanted.”

Mahalia Jackson Court, at 79th and State streets, is being unveiled Friday in the Chatham community, which the gospel singer called home for decades.


Carter Temple is eyeing the rest of the lot as a spot to build an apartment building in the next several years, Fears said. The site also worked well for the memorial because it’s close to the 79th Street stop on the CTA’s Red Line stop and Dan Ryan expressway.

“Her songs were gospel, so they were about hope and inspiration and uplift, and kind of going inside to find stability and strength,” Griffin said. “These are strong messages for the African American community and different ideas that I think should be encouraged and put in the forefront of our consciousness as a community.”

In June 2020, amid Black Lives Matter protests in Chicago, Griffin had an idea for a series of sculptures that would include Jackson — “a creative social response to the reaction of people tearing down monuments, because these hurtful, romanticized monuments excluded the stories and histories and narratives of Black people and the contributions that they made to society,” Griffin explained. “After the racial unrest and the death of George Floyd, people felt compelled to tear down these remembrances that served as ridicule. … So my idea was, instead of tearing down, how do we build up?”

Griffin says Jackson may be an “unknown figure” to some, so he’s determined to share her story with those who visit his monument. Visitors can scan a QR code at the monument to hear more about Jackson’s story.

“This is a big part of history,” he said. “That’s Chicago history, that’s Black history that goes untold. This sculpture, ‘Mahalia, Song of Greatness,’ tries to bring light to that.”

Mahalia Jackson Court, at 79th and State streets, is being unveiled Friday, Sept. 2, 2022 in the Chatham community.

PrevPreviousThe legacy of Serena Williams and her final US Open – maybe.
NextDistinguished president of Fisk removedNext