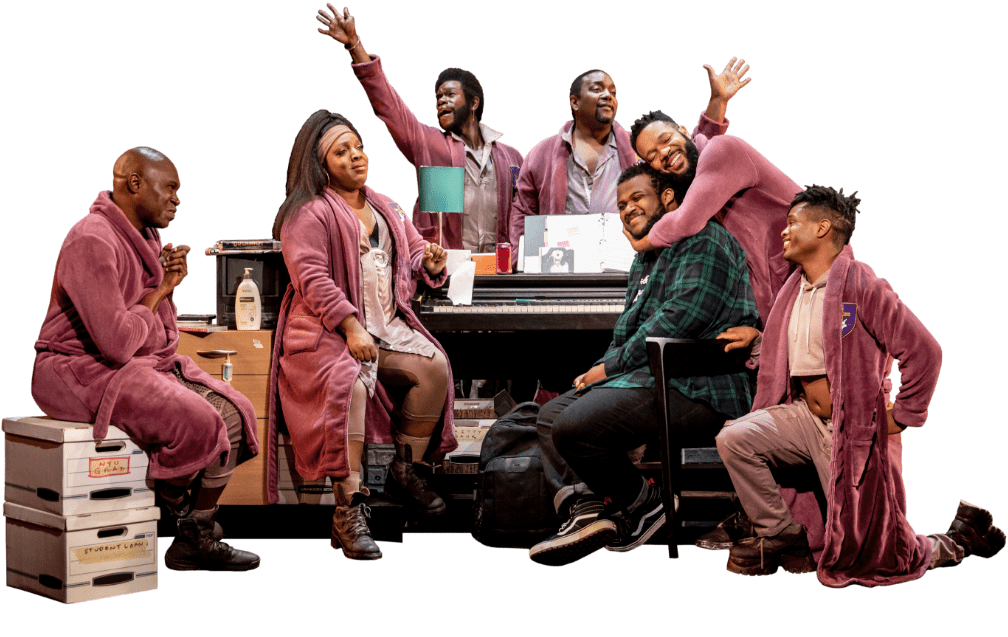 NEW YORK – “A Strange Loop,” a Broadway musical about a Black gay man’s drive to survive in the world, took home the coveted Best Musical award as well as the Best Book of a Musical award at Sunday’s annual Tony Awards, held at Radio City Music Hall.

“I just wanted to create a little bit of a life raft for myself as a Black gay man to get through the day,” Jackson, a 41-year-old Detroit native, told the audience. “There’s so much I want to say. I’m really speechless.”

The wins for “A Strange Loop” came out of 11 nominations for the show – the most of any production nominated at the 75th annual awards program. It was also part of what supporters of Black Broadway, on- and off-stage, hoped would mark a clean sweep or wave of wins. It was also the winner of the 2022 Pulitzer Prize.

In the end, there wasn’t exactly a sweep, but Black performers and productions did win some of the most significant awards.

Young stage phenom Myles Frost, the 22-year-old star of “MJ the Musical,” a stage homage to late pop star Michael Jackson, won for Best Performance by an Actor in a Leading Role in a Musical.

“Mom, I made it,” the Maryland native said during his acceptance speech.

Among other significant wins: Joaquina Kalukango of “Paradise Square” won for Lead Actress in a Musical, and Phylicia Rashad took home the award for Best Featured Actress in a Play for her work in “Skeleton Crew.” See the full list of Tony Award winners here.

The heavy Black presence at the annual awards ceremony — while not quite the sweep Black Broadway supporters anticipated (a handful of social media users tweeted the hashtag #TonysSoWhite) — was still many steps forward from the experience of Pulitzer-winning Black playwright Lynn Nottage some years ago.

Nottage, of Brooklyn, New York, was working on a Broadway production with a storyline based in Africa. The majority of the cast was Black. A white man who was one of the behind-the-scenes leaders told her audience members would not be able to relate because the play had no cast members with whom the public could identify.

“There you have it,” Nottage, co-creator of “MJ the Musical,” told Black News & Views. “And I’ve had some variation of that throughout my career.”

Now, a pandemic and organized public protest later, Black representation on Broadway is having a moment. The two productions with the most nominations – “A Strange Loop” with 11 nominations and “MJ the Musical,” about late pop star Michael Jackson, with 10 – were created by Black people and feature Black people in starring roles. Black theater veterans are being hired to help run the backstage and business end of productions and are being hired not only for roles portraying Black characters, but non-Black characters too.

“This for me is a dream moment,” Nottage, 57, also writer of “Clyde’s,” said during an interview a few months ago.

“I described to someone it’s the best of times, it’s the worst of times,” she said. “I’m part of an historic season in which you had eight Black plays that were on Broadway at the beginning – I’m not just talking about musicals, I’m talking about plays that were on Broadway at the beginning of the season and that’s completely unprecedented. So there was just a lot of joy going into the season. And so one by one we watched some of those plays not being able to survive and so it’s a bittersweet moment.”

And despite the bittersweet nature, the triumph of this evening is a far cry from the start of Black presence in New York City’s theater world.

Bert Williams became the first Black person to appear on Broadway as an equal alongside white colleagues in 1910 with his starring role in “The Ziegfeld Follies.” That landmark role was followed by Charles Gilpin’s appearance in “The Emperor Jones” in 1920, the production of “Porgy and Bess” in 1935, Paul Robeson’s appearance in “Othello” in 1943 and the production of Lorraine Hansberry’s “A Raisin in the Sun” in 1959.

Just before the pandemic, The Broadway League celebrated Black accomplishments and called for more colorful representation during the Let’s Do Broadway reception at a Times Square venue. Actor Phylicia Rashad, among others, talked about some of her more racially challenging experiences. Then came the pandemic, the closure of Broadway, and another cataclysmic event.

In May 2021, Georgie Floyd, an unarmed Black man, died under the knee of a Minneapolis police officer. Broadway staffers were part of the explosion of protests about police and issues of diversity across society. Nottage and other prominent Black people who are part of the Broadway working community wrote an open letter pressing those who run the theater to do better.

“Within the industry, we began to examine the practices within our own house and really came to terms with the fact that there was gross inequity on Broadway and off-Broadway and in regional theaters – just in the industry at large,” she said.

“We (those signing the letter) wanted the industry to hold themselves accountable for the ways in which they’ve diminished and harmed Black and other people of color over the years,” Nottage added.

But diversity was not the only issue facing Black performers, back stage professionals and business people on Broadway. There the pandemic packed a wallop, too. Performers, backstage people, ushers and everyone connected with the theater was suddenly out of work.

For the performers like Quiana “Q” Smith, the reopening of the Great White Way – so named because of Broadway’s lights, not performers’ and executives’ skin color – has been a revelation. After a year and a half of caring for a husband undergoing brutal cancer treatments, taking care of a newborn, moving temporarily across the country to find work, and subsisting on unemployment checks, Smith felt the happiness of reopening night down into her bones.

Smith plays Hannah and other characters in “Come From Away,” a musical about passengers on a flight diverted to a small town in Canada after the 2001 terror attacks, and the community that welcomes and cares for them.

Now that she is back performing (and grateful for it), Smith has noticed that the people who make up Broadway are more open to conversations about the nuances of certain lines and certain characters that might have a problematic layer for the Black community. More talented Black people are being hired too, she said.

She also said, “I think it’s because actors and artists are so much more united as a front and are willing to stand up for what they want and need.’

With landing the role in “Come From Away,” Smith, a native of Omaha, Nebraska, had finally reached the dream that sparked in her head when a production of Les Miserables came to her hometown during her youth. After a string of successes that included roles in “Aida” and “Dreamgirls,” she landed the role – written for an Irish character – in “Come From Away” and married her husband, a fellow performer. They became pregnant.

The pandemic hit while Smith was on maternity leave.

“Literally, eight days before I was to start rehearsal the world shut down,” Smith said in an interview.

Unable to find any work in New York, the couple drove with their infant son to the West Coast to temporarily live in her husband’s Los Angeles apartment, but their plans to find work there derailed.

“We found that (his testicular cancer) had come back and moved to his lung,” Smith said, explaining her husband had to start treatment right away.

“We were like, ‘What are we going to do?’ but God provided,” Smith said. “We had some help from different sources – friends and family – mostly emotional support. I was able to collect unemployment. I got like $160 a week.”

By late last year, life began to improve finally. Rumors circulated on a “Come From Away” cast text thread about reopening came through in the form of an email from producers. Smith returned for rehearsal and the show reopened in September last year.

“Everybody was hungry, ready to share,” Smith said. “The audience stood up on their feet. We started crying. We turned around and clapped for them. It didn’t die down for the first 10 minutes or so. The audience was roaring so loud we couldn’t even get to the next solo.”

The better times continued. Smith, along with other cast members, sang on national television at the lighting of the Christmas tree in New York City’s Rockefeller Center. Her husband’s cancer went into remission.

“I just want people to know that there is room for them now,” Smith said. “It’s not just about the industry but how our world is shifting. We’re all in it together.”