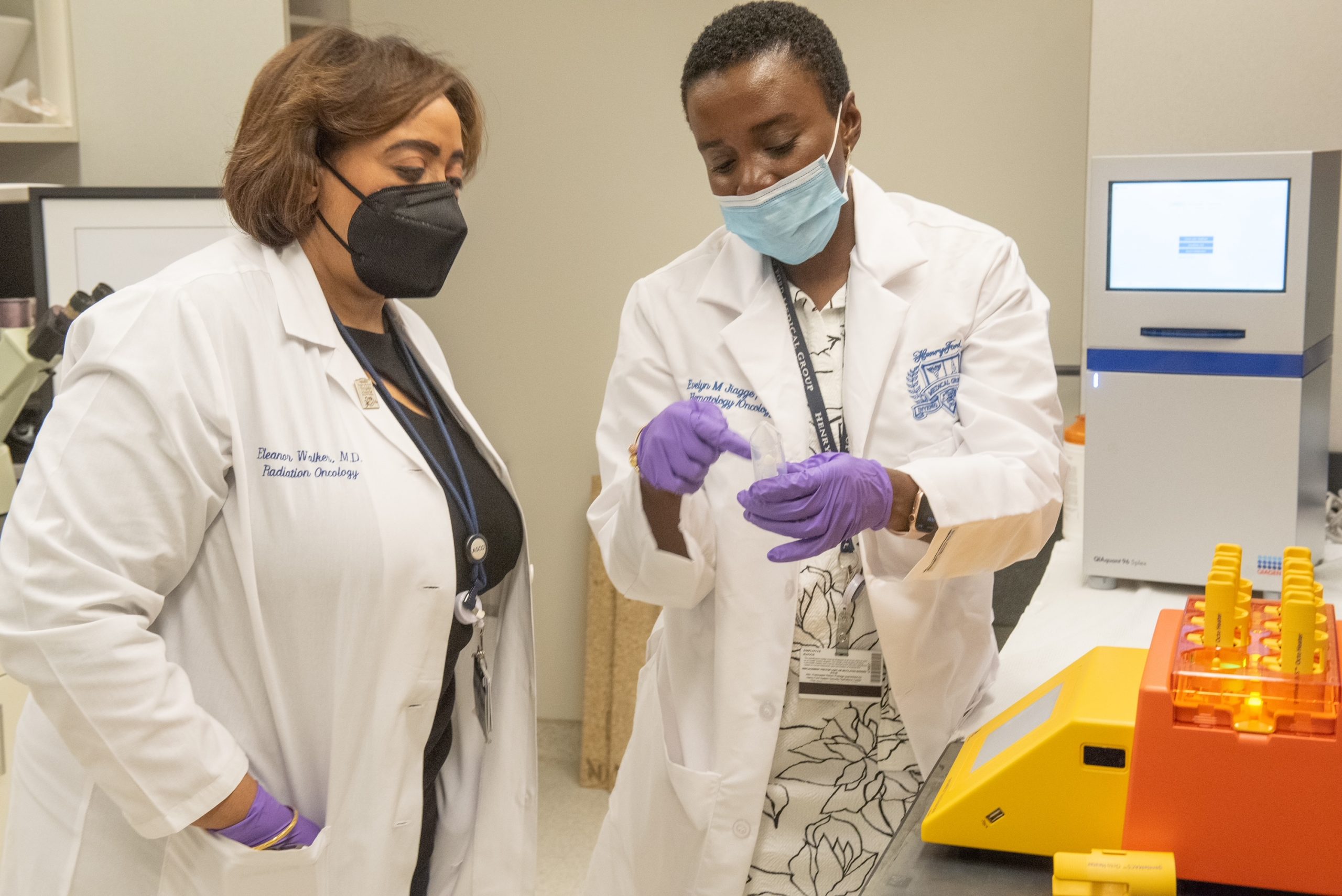 A physician in metro Detroit is on a daunting mission – to crack the code of a deadly breast cancer ravaging Black women on two continents.

Evelyn Jiagge, M.D., is uniquely positioned in the fight against Triple Negative Breast Cancer, so named because the cancer cells don’t have estrogen or progesterone receptors or a protein called HER2 — all of which can respond to treatment.

“I am an M.D., I am a Ph.D., I’m African, I’m in the U.S.,” said Jiagge, the lead investigator for Henry Ford Hospital Breast Cancer Research. “I have a perspective that few people will ever have,” she said.

Jiagge grew up in Ghana. While in medical school there, she noticed high numbers of breast cancer patients diagnosed with TNBC, which is fast-growing. Driven toward answers, she earned a doctorate at the University of Michigan, a global center of cancer stem cell research. Now, she is a research leader at Henry Ford Hospital Systems in Detroit, a city where 82 percent of its residents are Black, making it one of the Blackest cities in the country.

The geography was by design, Jiagge said. Though layers of politics and history mean there is a lack of breast tumor tissue from Black women for research, Jiagge is leading a project that flies tumor tissue directly from the operating table in Africa to Detroit, where the tissue becomes part of a research repository that also includes Black Detroit women’s breast cancer tissue. One of Jiagge’s colleagues at Henry Ford is reaching out to Black CEOs for funding – it costs $3,000 to sequence one sample.

“There is a rich population of Black (patients) at Henry Ford Hospital,” Jiagge explained.  “I believed that was the best place for me to do my work.”

Jiagge believes the shared ancestry between Black Americans and Ghanaians will lead to DNA-related solutions. An earlier study in which she participated found common tumor markers – or cancer indicators – in African and Black American TNBC patients. Such markers could lead to the development of new drugs. Although researchers are taking steps to close disparities, Jiagge believes society cannot wait for the research community to catch up.

In the United States, Black women with TNBC are 28 percent more likely to die from the disease than white women, according to BreastCancer.org, a nonprofit based in Ardmore, PA. And they are twice as likely to receive a TNBC diagnosis, the nonprofit reports. Studies show that someone with TNBC that has spread will die, on average, in a little over a year.

In Africa, 80 percent of breast cancer patients are diagnosed with TNBC, Jiagge said. Because health insurance is virtually non-existent in a country like Ghana, on Africa’s west coast, a TNBC diagnosis is a virtual death sentence.

What makes treatment even more elusive is that TNBC does not distinguish. It takes marathon runners and smokers, vegans and overweight women, young and old. Often, women under 40 are afflicted.

The goal for the current study is to derive enough information from the tumors that women, particularly Black and African women, will one day be able to undergo genetic testing that will tell them if they are likely to get TNBC. The hope is that from there, they can take steps to prevent it, such as preventive mastectomies. Even vaccines are a future possibility, Jiagge said. In each year of the five-year study which just got underway in 2021, Jiagge aims to collect 500 tumor samples each from Africa and from the United States. The study has met its tumor goal for this year.

“We want to sequence these tumors and come up with a number of genes that we will be testing routinely in each Black woman to determine their chances of developing breast cancer … but we need to understand the Black tumor in order to be able to find these tumors so that we can screen for them,” she said.

An ancestral connection seems to be the only connection that makes sense since Black Americans and Africans have different lifestyles.

Domestically, because Black women have greater access to health insurance and mammograms, their breast cancers are often found early when tumors are sometimes less than half a centimeter wide.

In Africa, Black women tend to eat more natural foods and rarely smoke or drink, but there is no equivalent to the U.S. health insurance programs. Mammograms are not affordable and if an African woman finds a lump on her breast, she is likely to consult her church and tap into her faith before she visits a doctor. By the time she does seek medical help, her breast cancer is more likely to be advanced.

Yet with all these differences, both groups are strongly affected. Finding effective treatments is crucial. That process is slowed by Black Americans’ distrust of the medical community and clinical trials. They have good reason not to trust.

In the 19th century, Dr. Marion Sims, dubbed the “father of modern gynecology,” operated on enslaved women without anesthesia or their consent. In the infamous Tuskegee Syphilis Study between 1932 and 1972, federal investigators lured impoverished Black men in Alabama with the promise of free medical care and let their syphilis run to term, killing them or leaving them blind or insane. In the 1950s, doctors at Johns Hopkins Hospital in Baltimore took the cancer cells of Black patient Henrietta Lacks without her consent, and used them to create cures and treatments for a host of diseases.

In an effort related to the tumor study, Jiagge has partnered with Dr. Eleanor Walker, director of breast radiation oncology and medical director of integrative services at Henry Ford, to figure out how to pierce Black Americans’ resistance to clinical trials. The Participatory Action for Access to Clinical Trials project is funded with a $750,000 grant from Genentech.

“By working with the community to help us understand attitudes about research, more minorities may be willing to enter clinical trials,” Walker said in a statement.

Jiagge also is working on another barrier to TNBC research: the extensive logistics involved in flying tissue in from another continent. Going forward, Jiagge would like to see if there is any way some of the initial phase of research on the African tumors can be done on the African end. She planned to travel to Ghana at the end of October to explore the idea.

Because all of humanity has a connection to Africa, Jiagge believes – and hopes – the research will benefit all women, especially Black Americans and Africans.

“When you are Black and researching Blacks, it’s something that affects you,” she said. “You are doing it as a mission because it is something that is important to you and very personal as well.”

PrevPreviousBreast cancer in men rare but still gets diagnosed
NextFamily of victim of Waukegan police shooting renew call for charges; ‘We have no justice’Next