To vaccinate or not to vaccinate: Black Americans guided by faith 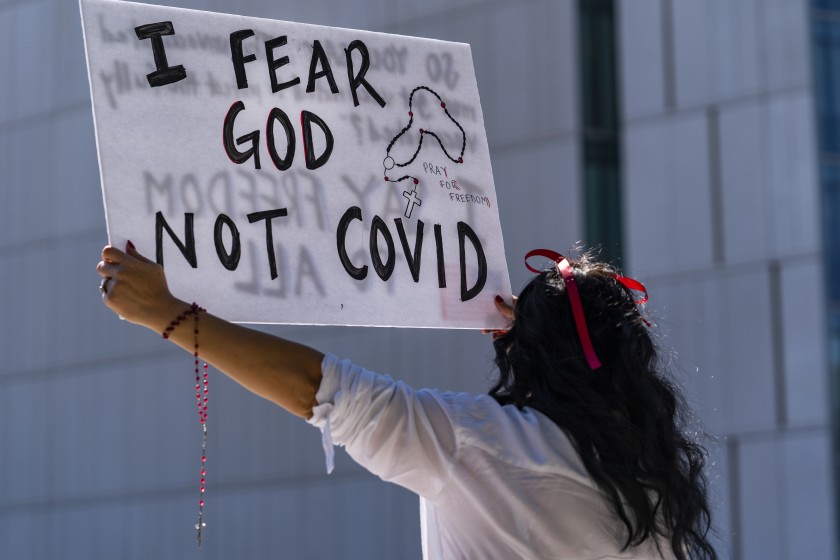 Deborah Robinson’s decision not to vaccinate against COVID-19 is rooted in her religious conviction.

“As a born-again believer, I knew to vaccinate or not needed to be an informed choice and not one made out of fear but with faith in God,” said Robinson, 69, who regularly attends a Baptist church in Washington, D.C.

Robinson said she understands there could be personal consequences for deciding against the shot. She will continue wearing a mask, washing her hands and practicing social distancing. She is tested weekly for coronavirus.

Robinson is one of multitudes of Black Americans leaning on faith to help them decide whether they don’t need a vaccine because God heals, or they say they want the vaccine because it is created by scientists guided by God. While the latest data from the Centers for Disease Control and Prevention (CDC) show vaccination rates among African Americans are rising and the racial gaps in vaccination are narrowing, they still exist. As of April 5, 2022, Black people made up 10% of Americans who’ve received the vaccination though they represent 12% of the population, the CDC reports. For white Americans, those numbers were 55% and 59% respectively.

It is likely that religion was part of the fuel for those choices for Black Americans. The Pew Research Center, a non-partisan think tank, reports about 75% of Black Americans identify as followers of Christianity, the largest religion in the country.

“If the vaccine is mandated, then I will request exemption,” Robinson said.

Others against the vaccine, like Robinson, said they believe they should put more faith in a higher power than an injection.

Prophet Wayne Loveless said he believes COVID-19 is a spirit that cannot be stopped by masks or hand washing, and that lack of trust stretches to the vaccine itself. At Loveless Ministries, his 25-member church in Raleigh, N.C., he advises against the vaccine.

“I’m not taking it; I’m against it; it’s not tested,” Loveless said. “I believe that this whole COVID is something to decrease the population, to give people COVID … and I’ve seen too many people that have been healed without vaccination.”

Loveless said he recovered from COVID-19 in three days.

“Spend time with God because it’s the greatest deterrent to the disease or virus, he said.

Brother Nafis Zahir, who practices Islam and lives in Atlanta, also refuses to take the vaccine.

The 58-year-old ex-Marine and retired federal employee who was diagnosed with COVID-19 more than a year ago said most Muslims in his inner circle don’t want the vaccine.  At his mosque, the Imam is opposed to the vaccine, he said.

The faith-based case for getting vaccinated

Those open to or in favor of the vaccine point out God, in their view, created science and science points to the effectiveness of being vaccinated.

Waller has held vaccination clinics at Enon and said his religion does not fundamentally believe in a religious exemption.

Rev. Dr. Ruth Allen Ollison, founder of the 100-member Beulah Land Community Church in Houston, has a similar philosophy. About 70% of the congregation is vaccinated.

“God is the ultimate scientist,” said Allen Ollison, whose church has held four vaccine clinics. “The vaccine, the ability to develop the vaccine, you know God did that. That’s out of stuff that God made so I try to use those explanations with people.”

Allen Ollison said she believes that the religious opposition to the coronavirus vaccine is dangerous, and notes that the people opposed on religious grounds are obstinate in their beliefs.

“They think that they are coming from a position of faith and there is not an understanding that they can be absolutely wrong, dead wrong,” she said.

An endorsement from the pope

At the 164-year-old Saint Augustine Catholic Church, the oldest Black Catholic church in Washington, D.C., Father Patrick Smith ends every Mass by recommending his parishioners follow his lead and get vaccinated.

“Statistics have clearly shown that the deadly virus has disproportionately impacted members of the Black and Latino communities nationwide,” Smith said.

Pope Francis encouraged Catholics to get vaccinated for the common good.

“Generally speaking, the Catholic Church has always respected the right of individuals to follow the dictates of their conscience — the voice of God within,” he said. “However, each person also has a moral obligation to have a well-informed conscience.”

There are nearly 2 billion Muslims across the globe with about 3.5 million living in the United States. Islam is the third-largest religion in the country following Christianity and Judaism.

Gregory Abdullah Mitchell is the executive director of the Council of Islamic Organizations of Greater Chicago, where about a half million Black, Asian and Arabic Muslims live and worship.

“We’re recommending that Muslims be vaccinated,” he said. According to Mitchell, a religious opinion, called a Fatwa in Arabic, has been shared in the community to take the vaccine.

“There is an opinion of respective cause within the Muslim community in the United States and here locally among our Imams and religious scholars that the premise for taking this vaccine really goes to the root cause of the concern that we have for this pandemic in the first place — that this is a virus that has the capacity to destroy more than yourself, that you, in essence, can become a spreader — and a fundamental doctrine in Islam is that our behavior should not contribute to harming others.”

Still, Mitchell says, it’s not Islam’s role to prejudge people and say no one is exempt.

The World Health Organization (WHO) says faith leaders have a role in educating their followers and a “special responsibility to counter and address misinformation and rumors.”

“I’m truly a man of faith, but I also believe God is putting us in places and positions as people of faith, to recognize and realize the importance of medicine that’s going to be there for our healing. We need to remember that when America has a cold the Black community has pneumonia,” Waller of Enon Tabernacle Baptist said.

“God does protect us, but God gives us common sense and faith without works is dead,” Waller said. “This hesitancy, I believe, in our community, has less to do with religion and more to do with hypocrisy and mendacity and how little we trust our government and society anymore because of it.”

PrevPreviousAsk Amy: Sisters should lay their problems to rest
NextNorthNext