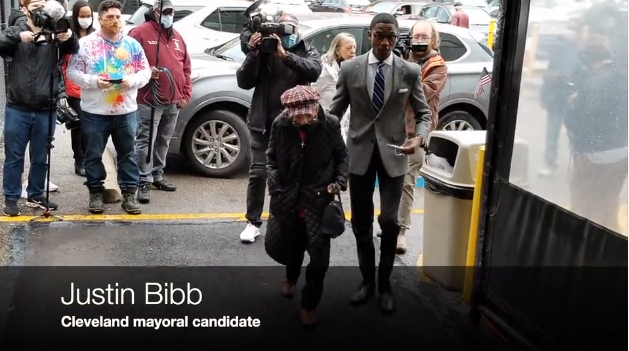 CLEVELAND, Ohio – Justin Bibb is young, Black and inexperienced. Bibb, 34, has never held an elected office, but his innovative thinking and ability to galvanize for positive change of all sectors of a diverse metropolis may convince Cleveland voters on Tuesday that he is the choice for mayor.

The other choice is Kevin Kelley, 53, president of Cleveland City Council since 2014.

The winner will replace Frank Jackson, mayor of Cleveland since 2005. Jackson was eligible to run for a fifth term but decided to retire.

If Bibb wins, he’ll become the second youngest mayor (Dennis Kucinich was 31 in 1977) and the fourth Black person (Carl Stokes in 1968, Mike White in 1990 and Jackson) at the helm of this Great Lakes city.

The new mayor will face several challenges. Cleveland’s the poorest big city in the country with 30 percent of residents and 46 percent of children living below the poverty line. A total of 6 percent of the city’s residents have bolted since 2010 and the level of violent crime has escalated to historic levels. The city has issues with lead poisoning and inequality in the city’s broadband internet access.

Bibb promises to take on those and several other challenges like police accountability, improvement of public health services and the opportunity to invest in the city’s neighborhoods with funds from the American Rescue Plan.

“The voters want a mayor that will bring a sense of urgency to the issues that we see in our city,” Bibb said. “Voters also want a mayor who’s going to listen to the responses and needs of our residents. We need to make sure we have a mayor that can unify our city, and have an inclusive economic comeback coming out of Covid-19.”

Bibb, who worked in finance at a local bank and as chief strategy officer at the nonprofit Urbanova, co-founded Hack Cleveland following the shooting and death of Tamir Rice to advocate for criminal justice reform using civic technology.

He studied urban policy and politics at American University and interned in Barack Obama’s Senate office in 2007.