‘An iconic moment’: In Warriors’ return to White House, Biden takes a knee 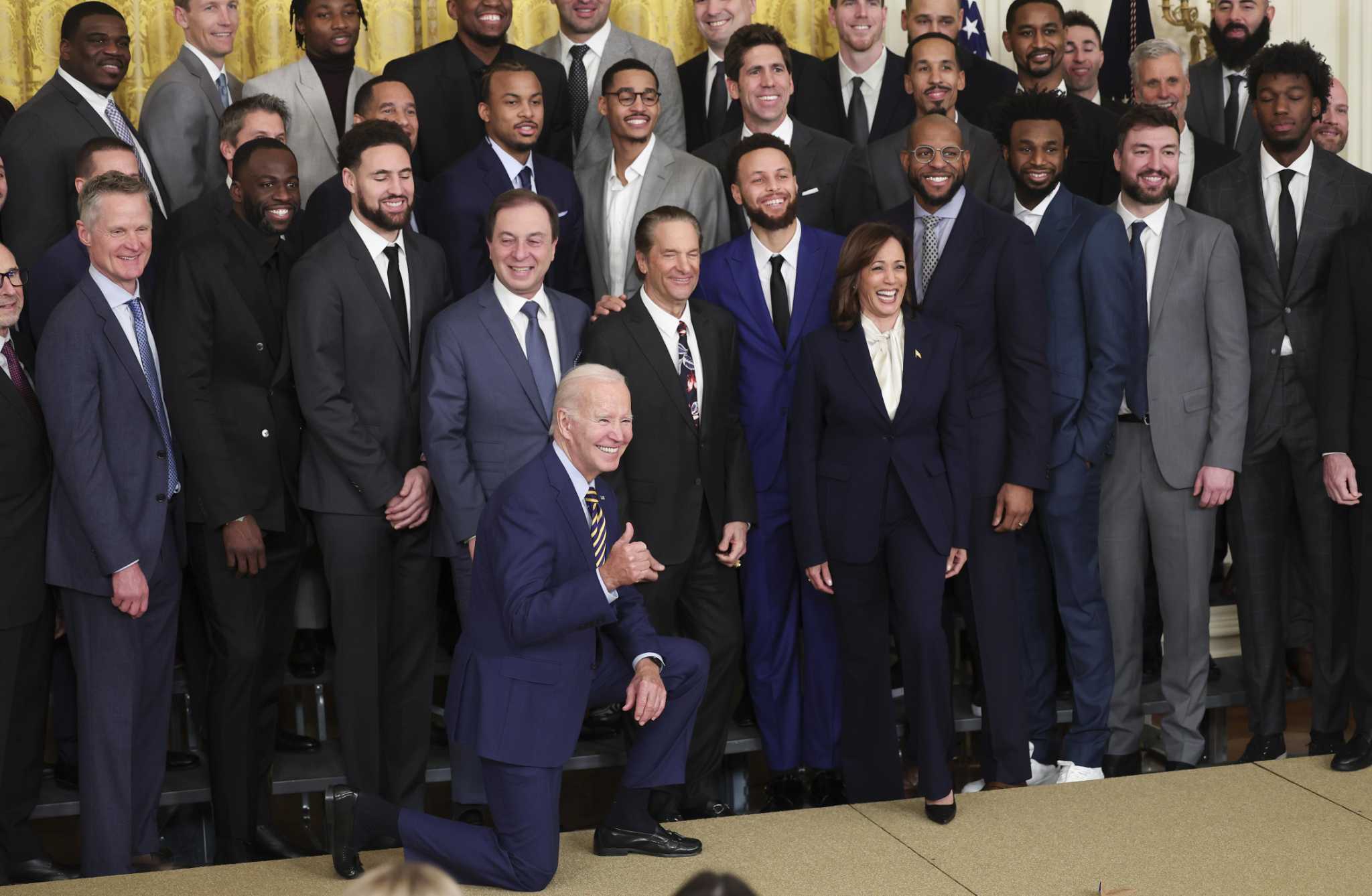 WASHINGTON — As President Joe Biden and the lined up for the traditional White House championship photo, the president took a knee.

Stephen Curry felt the weight of the moment. About six years earlier, the day before then-president Donald Trump “disinvited” Curry and the NBA champion Warriors from the White House, he told NFL owners to fire players who don’t stand for the national anthem.

“Very symbolic,” Curry said. “I think it was an iconic moment in the sense of what that image means. But the fact that he would do it there, I don’t know how he’d put words to it, but he’s just a humble server, man. That’s how you want anybody to approach the position that he’s in. … That picture is going to be one to keep.”

This was the Warriors’ first trip to the White House since Barack Obama’s administration in 2016 following the first of four championships in eight years under head coach Steve Kerr.

Golden State didn’t visit after winning back-to-back titles in 2017 and 2018 as Trump famously disinvited the team after Curry said he would vote against a visit in 2017. No invitation was extended the following season.

On Tuesday, the Larry O’Brien trophy rested on a small brown table at the center of the White House’s East Room underneath three grand chandeliers.

All rose to their feet and began chanting “Let’s go Warriors” as the team made their way into the ballroom to celebrate their NBA Finals win over the Boston Celtics in June with Biden and his White House staff.

Each member of the Warriors organization — from general manager Bob Myers to player development coach Jacob Rubin to All-Stars Klay Thompson and Draymond Green — was dressed in their Sunday best as they lined up on stage and savored the moment.

“It honestly didn’t feel that different from seven years ago when we were here,” Kerr said. “It’s a thrill. You still walk through the doors and have that awe that you’re feeling and everybody’s so excited. … It’s pretty special to be able to do this.”

After a brief introduction from Vice President Kamala Harris, Biden and Curry, the NBA Finals MVP, made their grand entrances. Biden then delivered a much different message than his presidential predecessor.

“Let me just say that the Golden State Warriors are always welcome in
this
White House,” Biden said.

The East Room erupted with applause.

“It spoke a lot to me,” Green said. “To win two championships and not have the opportunity to celebrate what’s been a tradition since Bill Russell and the Boston Celtics, it sucked.

“And obviously you want that opportunity, but we also — for obvious reasons — didn’t go. So I was very thankful and appreciative and also thought it was pretty funny, President Biden’s comments today.”

The Warriors had a packed White House itinerary on Tuesday. Jordan Poole and Kevon Looney had a Q&A session with White House staff. Kerr, Thompson and Moses Moody took part in a roundtable discussion on gun safety — a subject that’s extremely close to Kerr’s heart. Kerr has been a fierce advocate for gun control since his father, Malcom Kerr, was assassinated by the militant group Islamic Jihad while serving as the president of the American University of Beirut.

While addressing the East Room, Biden called Kerr a man of courage and humility for his accomplishments on the court and off-the-court activism.

“Look at what this team does,” Biden said. “Speaking out against racism. Standing up for equality… Encouraging people to vote. Empowering children and families to eat healthy and learn and play in safe places. Rallying the country against gun violence. And coach, I want to thank you again. (Steve’s) dad was a great man, a president at Beirut University and so much more because he was a victim of gun violence. But it matters.”

And Kerr was humbled by Biden’s words.

“It was incredibly flattering to hear the president introduce me and talk about my dad,” Kerr said. “I mean, that’s one you write down and keep in the family history. It was a pretty special moment.”

Players, families and guests had opportunities to tour the White House, and each Warrior had the chance to have a brief 1-on-1 meeting with Biden in the “Clutch Room.” There was a reception on the White House grounds after the event.

Those activities were off-limits to the media. Curry and Kerr participated in the White House press briefing. Kerr shared some details about his roundtable discussion with White House staff on gun control, while Curry thanked the Biden administration for successfully bringing WNBA star Brittney Griner home after she spent nearly 10 months in Russian custody.

“It means a lot to know that she’s here and all the work that went on behind the scenes to make that a reality,” Curry said of Griner.

Harris, born and raised in Oakland, said she’s been a Warriors fan her entire life. She recalled the time she and her husband, second gentleman Douglas Emhoff, went to a playoff game at Oracle Arena in Oakland.

They got stuck in traffic and Harris, California’s Attorney General at the time, couldn’t stand to miss tip-off. Much to the dismay of her security detail, she decided to jump out the car and take BART instead with fans.

“We got to the game on time, and yes, the Warriors did win,” she said. “It was a glorious day. And I even caught my Lakers-fan husband cheering them on.”

Curry, who endorsed Biden and Harris in a video speech with wife Ayesha at the 2020 Democratic National Convention, presented Biden and Harris custom Warriors jerseys with the numbers 46 and 1 stitched into the back, representing Biden being the 46th president of the United States and Harris being the first female vice president.

The Warriors actually intended to give Harris a No. 49 jersey on stage as the 49th VP, but it somehow got lost and was later given to her out of public view, according to a team spokesperson.

Curry jokingly asked them to hang the jerseys in the Oval Office, with hopes that Golden State can come back in future seasons to check if they’re still there.