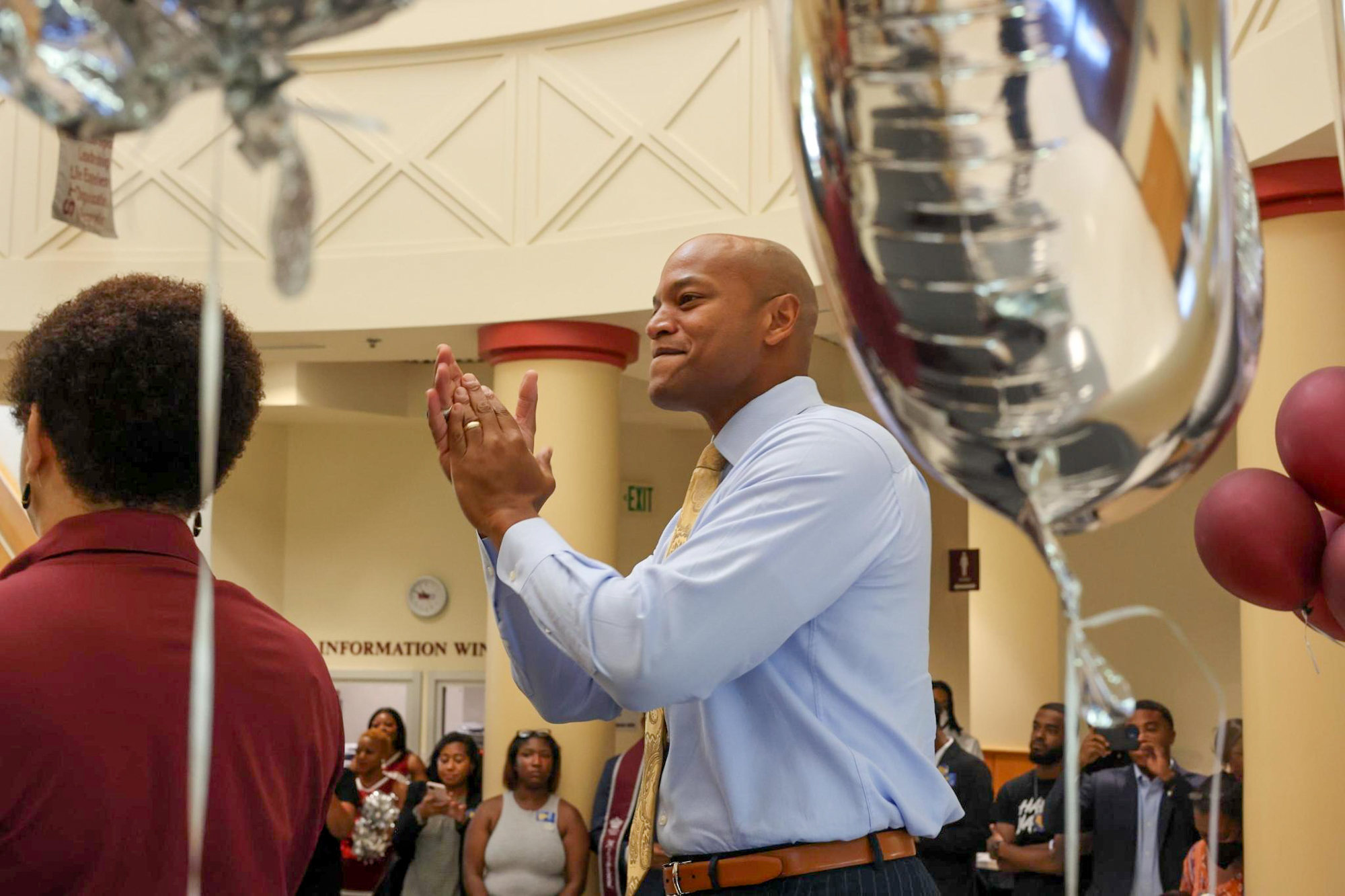 BALTIMORE, Maryland – A 17-year-old student-athlete named Wes Moore so impressed Bill Rhoden, the veteran sports journalist, that he made the basketball player from Valley Forge Military Academy the focus of his New York Times column about the 1996 National Basketball Association draft. The headline was “No Longer Trapped by the Stuff that Dreams Are Made Of.”

This was the draft in which Kobe Bryant and Stephon Marbury were selected by professional teams and given the ticket to potential stardom that still propels thousands of kids to endlessly practice dribbling, shooting, dunking and trash talking. Moore was there as a spectator to dreams coming true.

“He was kind of into the whole sports thing, like a lot of kids his age, but he saw the light and realized that was not the way he wanted to go, that he had much bigger fish to fry,” Rhoden recalled in an interview for Black News & Views.

The honor-roll student who was a campus leader and winner of oratorical contests was blown away by the experience of attending the draft in New York. He told Rhoden that he hoped to hear his name called by the basketball commissioner one day. His immediate sights, however, were on his military service. Beyond that, he foresaw college and ultimately a career in law and politics. If basketball was not in the cards, he told Rhoden, “I’ll move on.”

He did just that.

Now, the 44-year-old Democrat is on the cusp of becoming the next governor of Maryland. If polls showing him with a commanding lead over his Republican opponent prove accurate, he would become the first Black person to hold that office and only the third Black person ever elected as governor of one of the 50 states.

“I am not running to make history,” he said during a forum at the Reginald F. Lewis Museum of Maryland African American History and Culture on Oct. 3. Instead, Moore said, he wants child poverty, the racial wealth gap, environmental injustice, and inequities in education, health and the economy to all become problems of the past.

Since his Valley Forge days, Moore has earned a bachelor’s degree from Johns Hopkins University with Phi Beta Kappa honors; been selected as a Rhodes Scholar, which took him to Oxford University, where he earned a master’s degree; led troops in Afghanistan as a captain in the Army’s 82d Airborne; served as a White House fellow; started several businesses; written best-selling books; headed a nonprofit anti-poverty fund in New York City; become a frequent commentator on cable news shows; and produced his own television programs for PBS, Netflix and the Oprah Winfrey Network (OWN).

Moore’s marriage to Dawn Flythe was announced in The New York Times in 2007. At the time, he was a White House fellow working with then-U.S. Secretary of State Condoleezza Rice and Flythe was an aide to Anthony Brown, then Maryland’s lieutenant governor. Brown, who was elected to Congress in 2016, is expected to win his bid to become Maryland’s next attorney general. He would be the first Black person in that position.

Moore’s first New York Times bestseller, “The Other Wes Moore: One Name, Two Fates,” put him on the map in 2010 and made Oprah Winfrey a booster, but it also has come to dog him in his quest for the governor’s seat. A reader may be forgiven for reading the cover and the opening lines – not to mention the study guide for a children’s edition and an announcement of a movie adaptation with NBA star Stephen Curry as an executive producer – and coming away with the impression that Moore grew up in Baltimore just blocks away from a slightly older Wes Moore who is doing life in a Maryland prison. The other Wes Moore took part in an armed robbery that left a police officer dead.  The author did not grow up anywhere near the other Wes Moore. They were linked by their names, race, ages, and circumstances, not their childhood neighborhoods. The future political candidate, Westley Watende Omari Moore, was born in Takoma Park, Maryland, near Washington D.C., and, after his father’s sudden death, spent about 10 years of his childhood in the Bronx in New York City. His family moved to suburban Pasadena, Maryland, when he was 14. He did not live in Baltimore until he started college at Johns Hopkins. It was about the time that he was leaving to study abroad in 2000 that he read news stories about the other Wes Moore.

Upon Moore’s return from Oxford, he began exchanging letters with and then visiting the convicted Wes Moore. This became the basis for the book. Literary tropes,  marketing hype and uncorrected reporters’ mistakes aside, the part of the introduction that matters and what makes the book so compelling is this passage: “[T]he real discovery was that our two stories together helped me to untangle some of the larger story of our generation of young men, boys who came of age during a historically chaotic and violent time and emerged to succeed and fail in unprecedented ways. After a few visits, without realizing it, I started working on this project in my mind, trying to figure out what lessons our stories could offer to the next wave of young men who found themselves at the same crossroads we’d encountered and unsure which path to follow.”

Since Moore emerged victorious in a crowded field of candidates in the Democratic primary in July, he has impressed a growing number of Marylanders with his record of public service, his patriotism, his progressive ideas and magnetism. One political veteran marveled at how quickly past rivals and competing interest groups cast their lot with Moore with remarkable coordination and laser-focused communication – a rarity among Maryland Democrats.

“I was encouraged by his message: work, wages and wealth,” the Democrat said.

Moore reached out to him when Hayes was pushing for legislation to address racist real estate appraisals that have perpetuated a practice called redlining that, Hayes said, “has deprived Black communities of opportunities for wealth for decades.”

Moore’s offer to testify at a legislative hearing on Hayes’ bill convinced him that Moore was the real deal.

The broad attraction to the man who was describing himself as a bridge builder more than 20 years ago is understandable, Hayes said.

“He doesn’t give you the extremist vibe. He’s not extremist one way or the other. He seems more in touch and aligned with most Marylanders, who are not at the extreme spectrum of the political scale at all. I think Wes and his message speak to broader coalitions of Marylanders.”

Going up against Trump-supported opponent

Moore contrasts his war-veteran status and patriotism with his opponent Dan Cox’s support for the “Stop the Steal” movement and refusal to say he will accept the outcome of the election in November. Moore offers proposals for transforming the lives of Marylanders by focusing on equity from the cradle to the grave. He has positions on everything from health care to housing, K-12 education to employment in STEM jobs, criminal justice to climate control – all offering the promise to “leave no one behind.”

During their only debate, Cox’s retort that Moore left Maryland behind to take the job running an antipoverty fund in New York and has left many Baltimoreans behind by living in a wealthy neighborhood fell flat.

Cox portrayed himself as a civil rights lawyer who wanted to free Marylanders from heavy-handed government intrusion, give parents greater control over public school curricula, and protect kindergarteners from transgender indoctrination. He decried what he sees as Moore’s “social justice engineering” and warned that a Moore administration would set the state back with profligate spending and increased taxation.

Cox, who pledges to “restore freedom to the Free State,” has been roundly dismissed by incumbent Gov. Larry Hogan, a fellow Republican. Hogan has called Cox “a nut” and a “QAnon whack job” aligned with conspiracists who deny the validity of the 2020 presidential election. Cox tweeted that he was helping to organize several busloads of Trump supporters for the Jan. 6, 2021, “Stop the Steal” rally in Washington. What followed, of course, was the insurrection that is the subject of an ongoing series of Congressional hearings. As he was tweeting that former Vice President Mike Pence was “a traitor” for allowing Congress to certify the election results, others in the crowd were displaying the noose from which they intended to hang Pence when they stormed the Capitol.

Should Moore become governor, his biggest challenge, according to Hayes and others, will be managing expectations. First there are the hopes of the general public, especially Black people, that he will usher in a new era of hope and prosperity.

Hayes said he expects some of that, but also thinks that the Obama factor will be a reality check.

“We’ve actually had the experience of going through that emotional rollercoaster where we thought the world was going to change because we had a Black president,” Hayes said. “Now we have that at a micro-level as governor, but I think some of the same adjustments will have to be made.”

A greater challenge may come from legislators who have jumped on the Moore bandwagon. For a great number of the Maryland legislators, this would be their first time working with a Democratic governor after two terms of Hogan, “where we have just spent the last eight years fighting every moment to get things passed with at least a half dozen veto overrides.”

Democrats hold supermajorities in both the Maryland House and the Senate.

“I believe there are some who believe that now that we have a Democratic governor, he’s just going to rubberstamp everything,” Hayes said. “I don’t think we have the luxury or the resources to do so. That’s where the greatest tension is going to come from.”

They will have Moore’s own words as inspiration as they go toe-to-toe.