Appreciating Life and Family on a Day of Tragedy 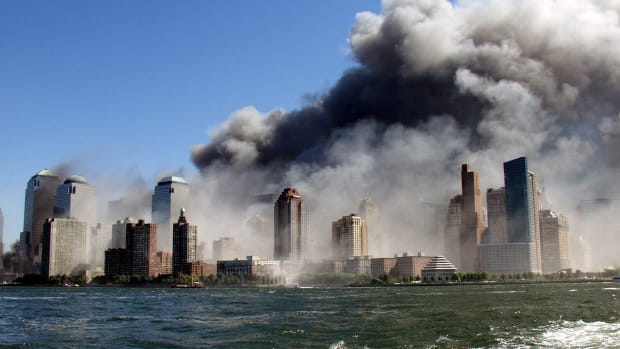 Twenty years ago, I was Vice President of Dunbar Productions in partnership with CBS’s syndicated unit Eyemark. We developed television shows and documentaries for Public Television and cable networks. However, I missed the excitement of writing and reporting stories and welcomed the chance to volunteer for the Episcopal Diocese of Newark’s publication “The Voice”. The following is the story I wrote the night of September 11, 2001.

I’m not one to miss Voice assignments, but on September 11th, I simply didn’t get the story that I was assigned that morning. I was invited to Trinity Church Wall Street for the videotaping of four meditations by the Archbishop of Wales, Rowan Williams. I was scheduled to interview him at the conclusion of the program.

Like thousands of daily commuters, I took the ferry from Weehawken, New Jersey to downtown New York, embarking near the South Street Seaport. Walking up Wall Street, I realized that I was early so I figured I’d stop by my bank to get some cash for coffee. I remembered that there was decent coffee in one of the World Trade Center towers and I began to walk in that direction.  As I came closer to the buildings, I noticed the streets filling up with people; all looking towards the sky as reams of debris fell to the ground.

At first, I thought it was a ticker tape parade. What seemed like millions of papers, envelopes, and binders floated from above. I noticed that people coming towards me had umbrellas raised as protection. I reached for my umbrella but instinctively grabbed my digital camera instead. It was a cheap camera that I received from Macy’s having purchased all my children’s back-to- school clothes at the popular store. A no-name brand point and shoot–I figured that it may not take the best photos, but it would likely produce a reasonable image.

A few blocks from the World Trade Center, I ask a crossing guard what was happening. She told me a small plane had crashed into one of the twin towers. She asked us to wait until the fire trucks passed and then motioned us to continue. Sirens were blaring and the streets filled with curious onlookers, our eyes pointed up towards the towers and the smoke. Moving closer to the tall buildings, I heard a low roar that began to grow louder by the second. It seemed like everything was now moving in slow motion except me. I stood motionless as it became clear that the second plane was about to crash into the Trade Center.  Some people stood frozen in disbelief. I fell to the ground, holding up that cheap plastic camera and praying that the photo would be in frame, and that I would live to see my family again.

The plane hit its mark. No one spoke or if they tried, nothing came out. I didn’t know if there were more planes behind this one. But I was certain that I was unwilling to risk my life for my chosen profession.  I felt vulnerable and scared, more frightened than I had ever been in my life. And I ran in the opposite direction of the mayhem. We heard the roar of more planes overhead. They seemed right above my head.  I thought they were the enemy, but someone screamed out that the planes were ours, F-16’s.

Cell phone service was down as the towers for most providers were atop the trade center. I had an off brand phone. Its tower was on top of the Empire State Building so I was able to make a quick call to my husband to assure him that I was alive.

I ran down Wall Street and back to the ferry terminal, hoping that I could get off the island. Ferries began arriving, taking as many passengers as it could hold. I was pushed onto one. I didn’t care where it was going as long as it was getting me out of New York. As we moved away from Manhattan, there was an eerie silence on the boat.  We brushed debris from our clothes and hair and stared at the unimaginable. We were a few hundred feet from the shore, watching the flames and smoke billowing from the towers. There were gasps, then whimpers and finally cries as we watched the first tower crumble to the ground. I snapped pictures from atop the ferry not thinking about a story I could write. I took photos because I couldn’t trust my own eyes anymore. It was just too much to observe. The ferry captain quickly accelerated and announced that he was dropping us off in an area unfamiliar to me. We were warned not to walk close to buildings. So, I walked along the river. Unpaved with lots of garbage, I stopped occasionally taking stuff out of my shoes. I had no real desire to look at the carnage I had just left but when I finally looked across the Hudson River, the second tower fell.

I kept walking as now my goal was clear. In this moment, I was no longer a reporter. I was a mother and wife who needed to get to my husband and two boys. It took a few hours to finally get to my car. By then, there was a makeshift hospital at the ferry terminal. Sadly, it was empty. As someone under the tent uttered, “You either walked out those buildings or died in them”.

I found my car and as I exited the parking lot, I saw scores of downtown workers holding up signs, looking for rides. Unfortunately, they had no cars in the lot and simply took the first form of transportation they could find out of New York. I picked up a passenger looking for a ride enroute to my house.  It had been close to three hours since I uttered a word. I needed to talk, to bear witness to what I had seen. I needed to cry. My passenger let me do all three. As I drove through the backstreets, he brought me comfort. He told me I was his angel today and I told him he was mine. I dropped him near his house where he lived with his elderly father. I made my way to church to pray. I was home and I needed to say a prayer of thanks.  I left the church and quickly headed to my children’s school. There were very few students left on campus. (A few would soon find out that they would never again see the parent who sent them off to class that morning.)  I tried to watch the news or listen to the radio but it was too painful to relive. I do feel a twang of guilt. Did I run away from arguably the biggest story of the century?  Maybe so. But I was safe and alive.

Twenty years later, I have no regrets about my decision to place family over profession. Twenty years later, I have no desire to relive this painful chapter in U.S. history and in my life. The memories of that morning  remain vivid. Like past years on that day, my television, radio and online activity will steer away from commemorations. I will pray for those who lost their lives and rejoice in knowing that I have watched my sons grow into fine young men.

Allison Davis is one of the 44 Founders of the National Association of Black Journalists.