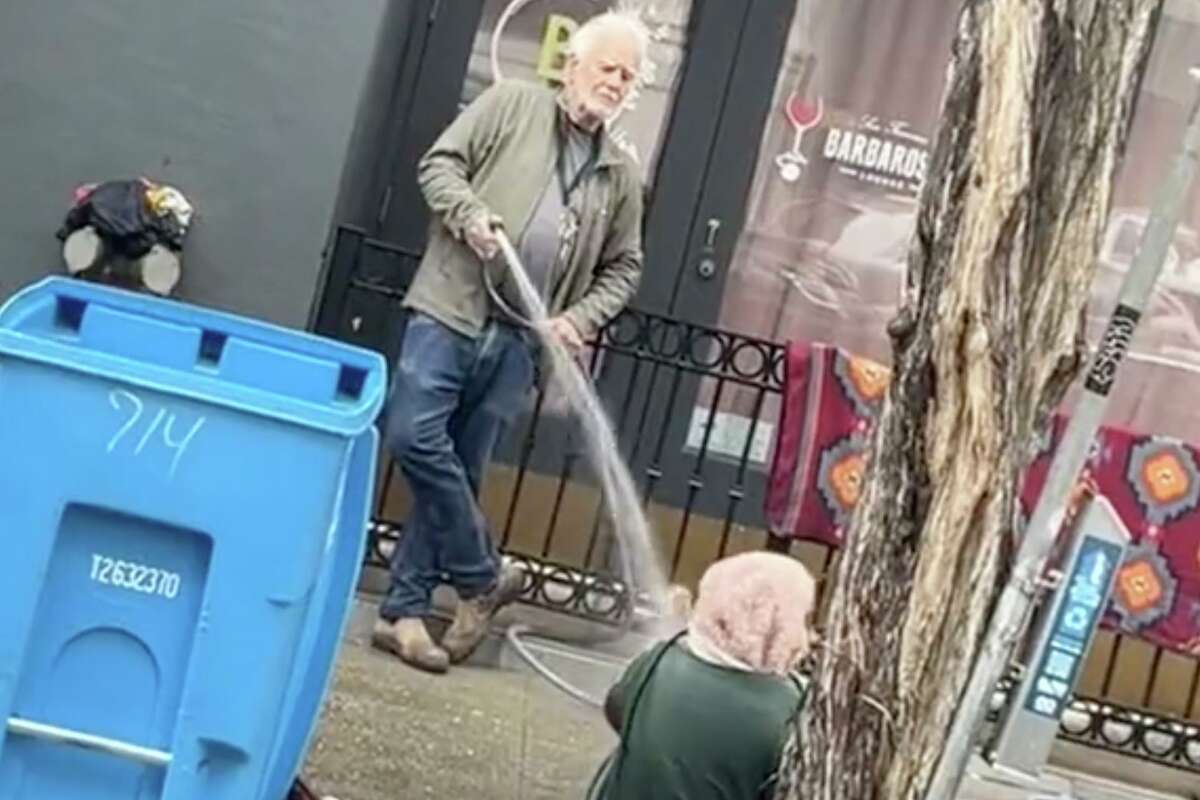 Two days after a San Francisco art gallery owner sprayed her with a garden hose on a sidewalk in the city’s posh Jackson Square neighborhood, the homeless woman whom nonprofit workers and officials knew as “Q” was receiving treatment in a local hospital, Board of Supervisors President Aaron Peskin said.

It was unclear as of Wednesday what Q was being treated for. San Francisco police, meanwhile, were investigating the incident that was recorded and posted online by a chef from a nearby bakery, with plans to present the case to city prosecutors for a charging decision.

“The process from here is to collect evidence, interview witnesses, develop the case, and present it to the District Attorney,” Police Chief Bill Scott said in a statement.

Q was nowhere to be found Wednesday afternoon, by which point the glass door of the art gallery, Foster Gwin on Montgomery Street, had been smashed, a board placed over the hole as a police cruiser lingered outside.

“I understand that there is frustration out there, and there is an impulse to act,” Scott said. “Right now, what we need is civility. If you are frustrated with a situation, please do not act on your anger. Take a step back and call the police so we can help. That is why we are here.”

Both Q and the gallery owner, Collier Gwin, had become sudden and central figures in an all-too-familiar San Francisco story after the incident went viral, drawing millions of views.

To many, Gwin represented the cruelty sometimes displayed by city residents and merchants fed up with the behavior of people experiencing homelessness and mental illness, while Q seemed to illustrate the need for more vigorous intervention to help people in obvious despair.

In an interview with the Chronicle, Gwin said his frustration with Q had built up over time as she turned over garbage cans, left possessions on the sidewalk and occasionally acted belligerent. On Monday, he said, she provoked him by refusing to move from a spot he was trying to clean.

“It’s a real tragedy,” Kristie Fairchild, executive director of the homeless services nonprofit North Beach Citizens said of the situation. Fairchild said she began interacting with Q at the onset of the pandemic, when the destitute woman began regularly seeking food and other forms of aid from the nonprofit. By Tuesday afternoon, Fairchild had received confirmation that Q had been hospitalized.

Known to drift around North Beach and the Financial District, Q seemed fairly isolated, Fairchild recalled, surviving by eating restaurant handouts and sleeping in doorways, until COVD-19 shut many businesses down.

“Everybody is aware of who she is, and we’ve all been trying to get her the services that she needs,” Fairchild said. “The reality is that she needs conservatorship,” she continued, referring to the process of forcing people who suffer from severe mental illness into psychiatric treatment or placing them in the care of a guardian. “But the burden of proof to create that kind of case can be so arduous.”

California law allows a court-appointed conservator to compel care only if someone is “gravely disabled” or cannot care for themselves. Critics warn that those who are conserved can be stripped of their civil rights, with authorities and caregivers often failing to pursue less invasive options.

Jennifer Friedenbach, executive director of the Coalition on Homelessness, saw the situation not as a a sign that San Francisco’s conservatorship process is too cumbersome, but rather as an indication that the city lacks appropriate mental health services — including housing for people whose erratic behavior might prevent them from congregating with others in a group shelter.

“A typical trajectory is that someone has manageable mental health symptoms,” Friedenbach said, “and then they’re homeless for a period of time, and then because of the trauma of being homeless, their symptoms become debilitating.”

On Wednesday, business owners in the Jackson Square area spoke of seeing Q around the 700 block of Montgomery Street in recent weeks, while distancing themselves from the attack depicted in the video.

A typed sign posted in the window of the Barbarossa Lounge, a nightclub next door to Foster Gwin Gallery, said the lounge owners did not condone Gwin’s behavior and had nothing to do with it.

“We had made several calls to Street Crisis Team in the past week asking them to help the homeless lady,” the signs said. “We also provided her with food when we were open and made several attempts to help her.”

Peskin, whose district includes Jackson Square, said his office tried repeatedly to assist Q, who he described as benign and vulnerable. “She’s not disruptive or unpleasant,” Peskin said, adding that people who have reported her to city agencies usually strike a sympathetic tone.

“They say, ‘She’s in misery, can you try to help?’” Peskin recalled. He said he was scheduled to speak Wednesday with Department of Public Health Director Grant Colfax, to see if Q could stay in the hospital “and receive psychiatric treatment.”

Fairchild expressed confidence that Q could achieve stability if given the right medication. “She’s very smart, and very dynamic,” she said, recalling times when Q appeared lucid, communicated effectively and even folded clothes at the North Beach Citizens resource center.

San Francisco police said Tuesday that police officers and workers from the San Francisco Street Crisis Response Team arrived to Montgomery Street on Monday after receiving a report of a possible assault, and that the victim was referred “for follow-up.”