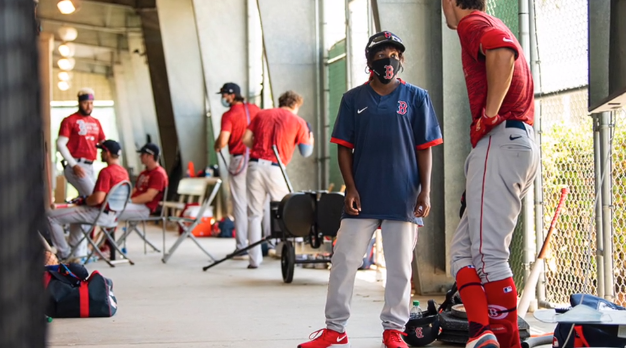 Bianca Smith’s historical hire by the Boston Red Sox granted her an unlimited amount of attention months before the start of the 2021 Major League Baseball season.

The Red Sox  hiring of Smith in January made her the first Black woman to coach in professional baseball. She spent the spring and summer as an instructor and first base coach for the Red Sox rookie affiliate in Fort Meyers, Florida.

Smith said she’s proud of her moment, but she craved the opportunity to solely focus on the game she loves.

“The only time I was reminded [about being a trailblazer]  was when a couple of fans asked me for my autograph, and when I was approached about doing an interview at the end of the season,” Smith said. “Other than that, I never had to think about it. It was great being a part of the staff and coaching.”

Smith’s baseball journey began as an undergrad at Dartmouth College when she volunteered to assist the baseball team with analysis and video. After graduation in 2012, she pursued her master’s and a law degree at Case Western Reserve University. She spent four seasons as the director of baseball operations for the school’s team.

After graduation, Smith interned with several Major League and collegiate clubs. She was hired by Carroll University in Wisconsin as hitting coordinator. After a year on the job, Smith was approached by the Red Sox. She accepted their offer in December 2020.

Once her first pro baseball season ended, she was invited by Case Western Reserve to share her wisdom with the students and baseball team.

“This is where it all started,” said Smith, about her baseball quest. “There was no way I was going to come here and speak and not help out the baseball team. This is family.”

Smith was the third historic hire of a woman in less than a year in professional baseball. Michele Meyer-Shipp, a Black woman, was hired as the MLB’s first chief of people and culture officer and Kim Ng was named general manager of the Miami Marlins.

PrevPreviousEmma Dieringer loves to use all of her hitters for H-F. But with Richards rallying, it was time for Chidera Ozoh to ‘slam it down.’
NextAsk Amy: Irish dancing leads to an uncomfortable jigNext