French President Macron hails Josephine Baker at the Pantheon: ‘She was all that’ 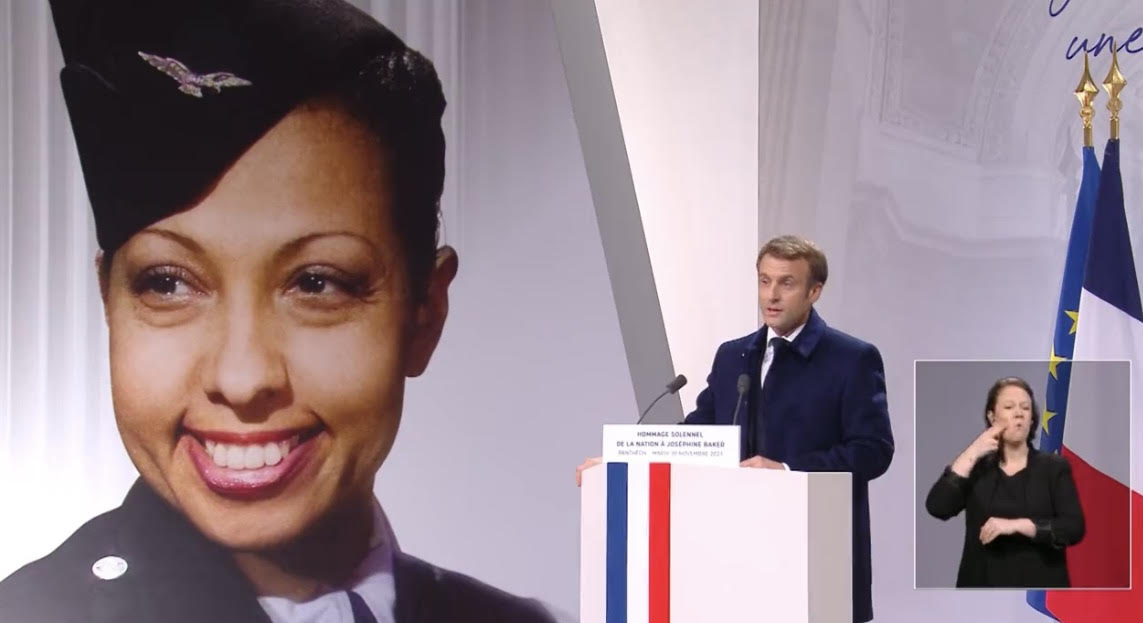 In an elaborate Tuesday-evening ceremony, France welcomed late cabaret dancer, activist and humanitarian Josephine Baker into the Pantheon, a 231-year-old former-church-turned-monument that includes the graves of French legends, heroes and heroines.

At the request of her family, Baker’s body was not moved from its grave in Monaco. Instead, a ceremonial coffin with soil from three places significant to her life — her native United States, and her adopted homes, France and Monaco — was interred at the site. Baker grew up in St. Louis, and after a career as a dancer on Broadway, moved to France to escape American racism. She spied for the French Resistance against Nazi occupation and spoke out against racial discrminiation, and was even the only female speaker at the 1963 March on Washington.

“Josephine Baker had a certain idea of man, campaigned for everyone’s freedom,” French President Emmanuel Macron said in French during the packed ceremony in Paris. “Its cause was universalism, the unity of mankind.”

Macron, who grew up listening to Baker’s music with his grandmother, announced Aug. 22 that the performer would receive the honor. Tuesday’s ceremony figuratively placed Baker in the ranks of philosopher Voltaire, cancer pioneer Marie Curie and novelist Emile Zola, who are buried at the Pantheon.

“She was all that, Josephine Baker,” Macron said in French. “Without calculation. Without a quest for glory. Devoted to our ideals.”

The French Ministry for Europe and Foreign Affairs praised Baker’s induction into the Pantheon.

“As a world-renowned music hall performer, Resistance fighter and an unstoppable antiracism activist, she always stood by the sides of those who fought for what was right, in France and all over the world,” the ministry said in a statement.

The French Embassy in Washington, an extension of the French government, has spent recent weeks singing the praises of Baker, one of the world’s first Black global superstars.

“The neo-classical Pantheon serves as the final resting place of over 70 figures in French history,”  the French Embassy said via social media.

“From authors like Victor Hugo to politicians like Simone Veil to inventors like Louis Braille — these individuals demonstrated an inexhaustible dedication to the values of the French Republic,” the embassy continued. “This month, Josephine Baker will join them in a gesture that gives gravity to France’s admiration and thanks for the life that she led.”

Baker grew up in St. Louis and danced on Broadway before migrating to Paris to escape American racism — as did a parade of Black creatives, including writers James Baldwin and Langston Hughes. She made fun of racist stereotypes through her dance. And long before actor Angelina Jolie made it her mission to adopt children from troubled countries, Baker adopted 12 children from impoverished situations around the globe.

The French have hailed Baker as a heroine for serving as a spy for the French resistance, a coalition of organizations that fought off the Nazis.

According to the Embassy Twitter account, “she fought for the second home that gave her a space to chase her dreams.”

The Embassy also posted: “Her profile made her a target, but her disdain for all forms of hatred made her a fighter.”

The movement to vault Baker to Pantheon status was pushed by Baker’s family and writer Laurent Kupferman, who circulated a petition on the Change.org website that caught the attention of President Macron.

Some national political observers pointed out, though, that while France might be displaying a tone of inclusion with Baker’s induction at the Pantheon, the country’s reputation in some circles as a racial utopia is misguided. Tuesday’s ceremony came as Macron looks to a 2022 reelection race, and as France – like many countries around the world – contends with racial wounds exposed in the aftermath of the May 2020 death of George Floyd, an unarmed Black man murdered by a Minneapolis police officer. Black American transplants living in today’s Paris occasionally post on social media about racial microaggressions they face there.

That reality, however, has not dampened the spirits of Black people around the globe celebrating the news regarding Baker. In the United States, celebrations were planned for Miami Beach, New York City and more.