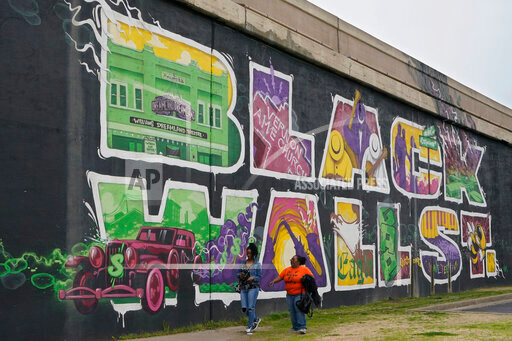 They were all destroyed during the Tulsa Race Massacre of 1921. White rioters set the Greenwood neighborhood ablaze, destroying the beloved Black Wall Street. The North Greenwood Avenue corridor boasted a newspaper, pawn shop, hotel, hardware store, and the grandiose Mount Zion Church at the time.

Steps from Silhouette is a plaque on the sidewalk dedicated to Grier’s, a shoe store destroyed in the havoc. Cooper often wonders what could have been had white rioters not destroyed Black Wall Street.

“If the Black community could thrive and the massacre didn’t happen, Silhouette or something similar would already exist,” she said.

Black designers produce about 75% of apparel sold, a commitment to uplift other Black entrepreneurs.

As the city commemorated 100 years since the wreckage, Cooper was able to gift Viola Fletcher, 107, one of the longest-living survivors, with a pair of Air Jordan 1s, which typically run about $180. It was a humbling experience, said Cooper, as she realized how privileged she was.

When Cooper asked Fletcher which pair of shoes she wanted, Fletcher didn’t know which pair to choose.

“I’ve never owned any of those,” Fletcher remarked. “I never had the money to own them.”

The George Floyd protests and disproportionate impact of the coronavirus pandemic have been a flashpoint that forced many to confront long-standing issues of racial injustice in America.

Months after the centennial of the 1921 Tulsa race riot, community leaders and officials in Tulsa are using that zero hour to reflect on the harm that white rioters caused — and the government later exacerbated — to reimagine the power of the Black dollar.

Figures from the most recent United States Census Bureau jobs report show the U.S. unemployment rate has declined to 5.4 percent, but it is still far from the 3.5 percent recorded in February 2020, just before the pandemic began.

Essential workers, particularly Black and Brown, are less likely to have access to remote work, and have borne a disproportionate amount of the pandemic’s economic fallout.

Creating good, quality jobs and reducing barriers to capital are key to spearheading inclusive economic growth as we continue to deal with the economic ramifications of COVID-19, said Kamas.

The newly formed TAEO is an independent economic authority, the result of an 8-month study that indicated merging several offices tasked with development could strengthen the city’s efforts.

The move increased their budget from $1 million to $8 million, a needed one to pursue increased investment but cities have to be more innovative and creative when doing economic development, said Kamas.

“We forget about things like a microloan for a business and efforts that reduce utility bills,” she continued.

The city created a $2.1 million loan fund for burgeoning entrepreneurs in North Tulsa and the Evans-Fintube project. The former industrial facility borders Greenwood, and is set to become a mixed-use development with retail, housing, and entertainment venues. Community engagement is key to the project as to “ensure we’re listening to what they want,” said Kamas.

Black entrepreneurs face greater obstacles, such as access to capital, on the path to starting a business compared to their white counterparts.

In Cooper’s case, “I didn’t know what I didn’t know,” but entrepreneurs are natural problem solvers, said Cooper. When Silhouette closed for 6 weeks due to the pandemic, the store shifted to online sales and even responded to the rental crisis, paying rent for 25 families late last year.

Cooper surmised there are probably more white-owned businesses than Black ones on Black Wall Street now. Some local leaders believe that development in the Greenwood District is pressuring longtime business owners and residents to leave, spurring gentrification.

Kamas affirmed those concerns, noting that redevelopments in the North Tulsa area, historically Black, have shifted racial demographics. Policymakers have to “go in with that recognition at the outset,” said Kamas.

Starr Fisher serves as special events director of the Greenwood Chamber of Commerce, concerned with furthering business interests in Greenwood. While she recognized new development in North Tulsa is not led by Black people — the Chamber owns a two-block radius of buildings in Greenwood but projected business corporations own most of the rest — Fisher sees the changes and the pandemic as an opportunity to double down on efforts to create resources for the Black community.

The Chamber, a nearly 95-year-old organization, is working on the Greenwood Project, with the goal of identifying descendants of massacre victims to receive monetary compensation — reparations.

It’s part of a broader effort to create a “financial ecosystem,” one where Black people around the world forge financial and technological partnerships to uplift one another economically. For instance, in nearby Tullahassee, one of few remaining Black towns in Oklahoma of Native American Territory, community leaders are working to secure local, state, and federal aid to advance their economic agenda.

The Chamber is using its image as a face of Black Wall Street to help bring attention to causes in these areas. “We want to collaborate and make sure they can preserve the land over there. I say we because we feel so connected to these towns.” Fisher said., “We want to work with everyone.”

For those interested in aiding these efforts, they can operate as “friends of the movement of Black Wall Street,” said Fisher, much like white abolitionists who helped efforts to free enslaved Black people. And that’s where the government should step in, Fisher added.

The government has to put more money into local businesses, writing grants to make sure entrepreneurs have the funds to empower themselves. It’s a form of “self reparations,” she said, to help Black people “create their own wealth.”

And creating that wealth is surely possible. “Greenwood is the testimony,” said Fisher.

Along with several other organizations, the Chamber has also contributed to Greenwood Rising. It’s an experiential museum that details the history and significance of Black Wall Street and the Historic Greenwood District. The immersive media exhibit also chronicles the history of systematic oppression against the Black community since Jim Crow.

President Joe Biden became the first sitting president to visit Tulsa ahead of the centennial, and the city gained resonance with young people when depicted in HBO’s The Watchmen. However, as young organizers make calls for defunding the police in favor of investing in social programs, visitations alone may not be enough.

Tulsa officials are diverting resources to police forces instead of jobs, mental health, or public education, and young people specifically need assistance, said Cooper. She said some city officials called her, directing renters in need to the store because the city was still struggling to dole out rental assistance funds.

Fletcher, a Black woman who lived to see one of the deadliest race riots on record in U.S. history, struggled financially her entire life, said Cooper.

“We’re a society that teaches that accountability is important,” said Cooper.  However, there hasn’t been any in Tulsa.

Ahead of the centennial, Mayor G.T. Bynum issued an official statement apologizing for the city government’s role in the massacre. Not everyone is on board with having conversations about racial injustice, however. Most recently, those critical of the Black Lives Matter movement subjected the community’s Black Lives Matter street painting to such intense debate that the city removed it.

There’s a generational trauma that racist violence produces, and people like Fletcher embody that, said Cooper. “The land should be given as reparations,” Cooper continued. “Wherever that wealth is, it needs to be given to folks.”

Mayor Bynum does not endorse reparations but is in favor of acknowledging and undoing systemic racism, Bynum said in an interview with Tulsa World.

While the TAEO does not have a formal stance on reparations, Kamas explained ownership and wealth are pivotal in developing North Tulsa. The government used urban renewal to take private Black-owned land and make it public, disrupting the social fabric and local economy in the process, said Kamas.

In Tulsa, more than 35 buildings had to be razed because the damage from the rioting was so severe. Decades later, politicians built Interstate 244 there — cutting right through Greenwood Avenue.

During the civil unrest of 2020, many wondered if the protest momentum could be sustained or just how much it would translate into policy, if any at all. The work of rebuilding Black Wall Street is much the same. How can the nation not only acknowledge the harm of the massacre but also propel economic empowerment for Black Americans?

“Black Wall Street is not a moment. It’s a movement,” said Fisher, as many now learn the story of Greenwood. “We’re in a time of reparations for history, mental growth — reciprocity for the things we lost.”

While Fisher believes North Greenwood Avenue will never be as prosperous as it was in 1921, Fisher instead believes it can actually be better, with technological and financial partnerships that span worldwide.

“The pandemic has been an opportunity for a new Black Wall Street.”

Amethyst J. Davis is an NABJ Casey Fellow covering health and COVID-19. She is a proud daughter of Cook County. You can follow her on Twitter @APurple_Reign.

This report was made possible with support from the Annie E. Casey Foundation.