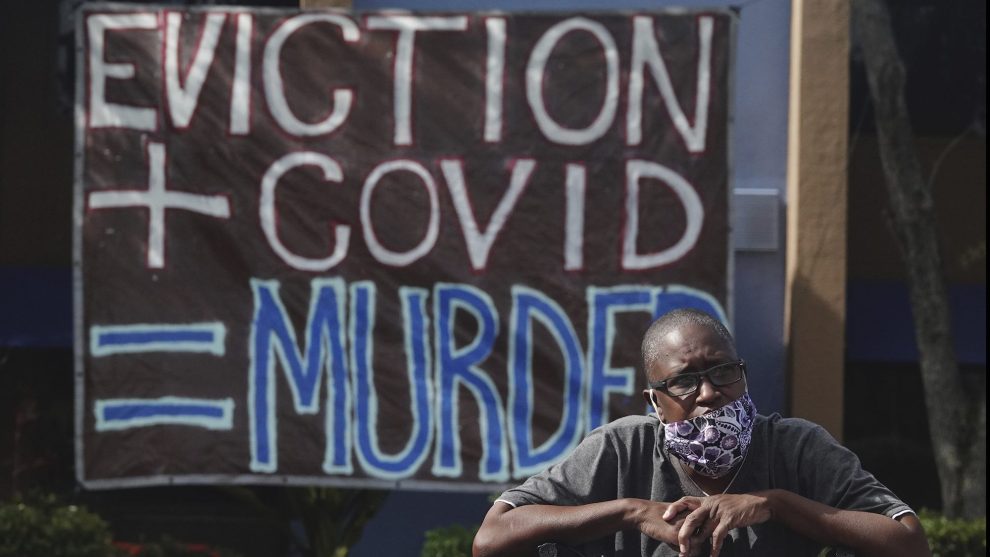 Tiana Caldwell had been diagnosed with cancer for the second time when she, her husband, and son were evicted from their home in 2019. The working mother and two-time cancer survivor sought shelter with her family in a hotel for six months.

It was then she was exposed to a callousness about her health and concern to put a roof — albeit a temporary one — over her family’s head.

Caldwell overheard one of the property managers on the phone talking about her family. “Their words were, ‘I don’t want her to die in this unit.’”

Her son overheard the entire conversation.

Caldwell is now the leader and board president of KC Tenants, a tenants rights organization in Kansas City, Missouri. Chaining themselves to courthouse doors and disrupting over 900 virtual court proceedings, organizers are working to prevent one public health crisis in the face of another.

Housing advocates fear that a wave of evictions and massive influx of people into homeless shelters, which many cities rushed to empty in the early days of the pandemic due to overcrowding, could lead to another surge in places already hard hit by the pandemic.

About 12 million people have little to no confidence in their ability to pay their rent next month, according to the most recent results from the United States Census Bureau Household Pulse survey taken between June 23 and July 5.

And while race is typically excluded from an eviction filing, research shows that evictions disproportionately impact the Black community more than white and Latinx counterparts. The threat of eviction is even more pronounced amongst women in these groups, according to an analysis from researchers at Princeton University’s Eviction Lab.

In times of crisis, “landlords give white tenants more grace than they often do to Black or Latinx tenants,” said Alieza Durana, Narrative Change Liaison at the Lab, where researchers used census tract data to predict the race of those who received eviction notices.

“It’s also the case that white tenants have more resources at their disposal” should emergencies arise, said Durana.

The highly transmissible Delta variant has some states reimposing mask mandates to reign in on a surge in COVID-19 cases that has young people severely ill and hospitals buckling under the surge.

The Delta variant now accounts for an estimated 83% of all cases in the United States as compared to 44% in late June. The 7-day moving average of daily COVID-19 cases is over 110, 000, levels not seen since the fall 2020 surge in the absence of a vaccine, according to data compiled by the CDC.

While fears over the variant, believed to be twice as contagious as others, have driven more people to get vaccinated, deep inequities persist.

The eviction moratoriums from the CDC and both the Trump and Biden administrations have exposed complications of implementing housing policy in decentralized ways. With varying degrees of protection and loopholes, courts still processed evictions.

Landlords have used informal means to evict tenants, such as not confirming rental assistance for tenants, said Caldwell.

They’ve also defied orders, altogether, said Diane Charity, board secretary for KC Tenants. Charity revealed she scolded an elected official who was seemingly unaware that judges in Jackson County, Mo. were violating the county’s own moratorium.

The CDC’s order was not as effective in stopping evictions at the offset, said Durana, because it did not freeze the eviction notices but rather compelled tenants to submit a declaration to their landlord confirming their eligibility for the moratorium.

“You have to know about your rights before you’re able to exercise them,” and since tenants do not have the right to counsel in many localities, they’re “alone fighting this fight. It’s unfair,” said Durana.

But small landlords say the moratoriums prevent them from utilizing an incentive to collect rent, making it hard to pay their mortgage. The National Apartment Association became the first organization in the country to sue the United States government for back rent, upwards of $27 billion.

“Their living is made off the backs of working people,” said Caldwell. But the situation’s slightly different for small landlords, or “bank tenants,” because they “don’t outright own their building, said Charity.” If a small landlord loses their building, renters inherently take the hit, also.

The KC Tenants organization has several small landlords in its base.

Jared McClain of the National Civil Liberties Alliance represents four “bank tenants” in a lawsuit against the CDC, arguing that the moratorium is outside the bounds of the agency’s emergency statutes.

The Trump administration authorized an eviction moratorium in April 2020 through July 2020 via the Coronavirus Aid, Relief, & Economic Security (CARES) Act. When that lapsed and pressure mounted, the CDC issued a statement arguing that a wave of evictions presented a threat to COVID-19 infections and mortality, using its emergency powers to implement their own moratorium in September 2020.

The Public Health Service Act of 1944 gives the CDC the power to “quarantine or destroy livestock if they believe doing so would stop the spread of a communicable disease,” said McClain. However, McClain asserts the agency has divorced the “catch-all language” of “and other things” in these statutes from the specific cases these edicts were designed for.

Some of McClain’s clients allege there are few tenants who are capable of paying rent but they are choosing to “ride out” the moratorium, said McClain. And because some landlords and tenants still have yet to receive rental assistance, “what (the government) decided to do is make housing providers shoulder the entire cost of keeping tenants in their rental units.”

If the CDC begins implementing housing rather than health policy, it gives legislators a reason not to act, said McClain.

“Why is Congress going to make a difficult political decision when the CDC, which is not elected or accountable to anyone, can issue an order and take the political heat for this?”

What remains left to be determined is the long-term impact a massive eviction avalanche could have on housing affordability and residential segregation in America — but current trends suggest it wouldn’t be good.

Evictions can remain on one’s credit report for up to 7 years, restricting one’s housing options. And a recent study from the University of California, Berkeley shows that 81% of metropolitan regions with populations over 200,000 people are just as racially segregated today as they were 30 years ago.

Jacqueline Waggoner, President of the Solutions Division at Enterprise Community Partners, said “COVID-19 excacerbated what we experienced,” regarding housing issues.

ECP is a nonpartisan, nonprofit organization that works to advance housing affordability across the United States through advocacy and policy. Its Equitable Path Forward program is a 5-year plan to invest $3.5 billion in capital and leadership development in small developers led by people of color nationwide.

In terms of where housing policy goes next, this should be a moment of reflection to develop a long-term strategy, said Waggoner, because “if people are financially strapped day to day, they really don’t have much to fall back on.”

While some organizers embrace rental assistance and moratoria, others prefer rent cancellation outright.

“The people are the ones driving this campaign,” said Charity.

Recent federal efforts around housing include the massive $2.25 trillion infrastructure bill, which includes $332 billion for housing and expands housing-choice vouchers and the low-income tax credit.

The CDC moratorium lapsed August 1, 2021, which was subject to much scrutiny from tenant rights organizations and progressive Democrat leaders.

Representative Cori Bush (D-Mo.), a single Black mother and previously unhoused person, gained national attention when she slept on the Capitol steps in protest, demanding the House reconvene to extend the moratorium.

On August 3, the CDC issued a new moratorium through October 3, the final extension. It is already the subject of a federal lawsuit.

The moratorium prevents evictions in areas of the country with “high-transmission rates of COVID-19,” which is currently most of the nation, according to county-level data from the CDC.

The moratorium does not stop evictions filed between August 1 and August 3 from taking place.

Amethyst J. Davis is an NABJ Media Network Casey Fellow covering health and COVID-19. She is a proud daughter of Cook County. You can follow her on Twitter @APurple_Reign.

This report was made possible with support from the Annie E. Casey Foundation.

PrevPreviousATLANTA _ “I am Georgia through and through!” U.S. Sen. Ralph Warnock (D-Ga) told the Atlanta Press Club this afternoon
NextBlack Boxer Mykal Fox On Judge’s Racist Tweets: ‘It’s Like I Lost Before Entering The Ring’Next