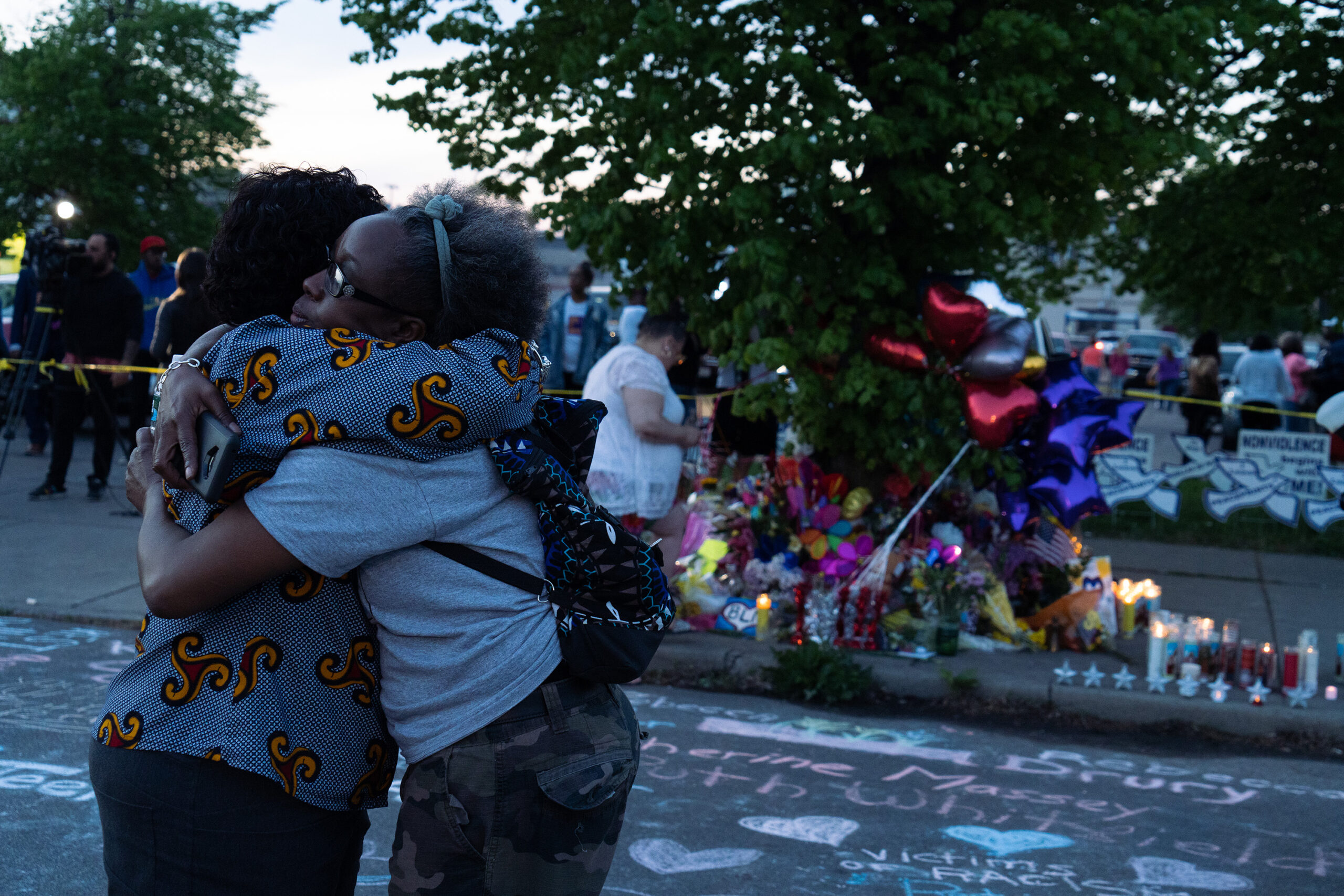 The world is still reeling from the Saturday afternoon in May when 18-year-old Payton Gendron is alleged to have alighted from his car in a supermarket parking lot in Buffalo, New York, armed with a Bushmaster XM-15 assault rifle.

Gendron, a white man, had just driven 210 miles, three-and-a-half hours from his hometown of Conklin, New York, near Binghamton, in search of a locale with the highest possible random concentration of Black people.

Gendron was inspired by “the great replacement theory,” a concept perpetuated by conspiracy theorists that nonwhite people are being brought into the United States to replace white people. On that tragic day – May 14th – Gendron’s research led him to the Jefferson Avenue Tops Friendly Market on Buffalo’s East Side.

This neighborhood, which is almost 90 percent Black, hosts the only supermarket for miles, and is the primary destination for people without cars to access essential services such as paying bills, visiting a pharmacy or cashing a check.

As Buffalonians went through mundane tasks like these on that day, Gendron barreled toward Tops and shot 13 people, 10 of them fatally, making everyone present suddenly part of a tragic statistic.

According to the Gun Violence Archive, a nonprofit that collects near-real-time gun violence data, 19,333 Americans have died of gun violence in 2022 – and that includes the victims in Buffalo. The organization also reports that 254 people have been injured in mass shootings in the United States this year.

In the face of such striking statistics, some might not consider the up-close effects of gun violence.

Tops supermarket has gone dark and has been closed ever since. As is the timeworn custom of Black Americans, the residents of this neighborhood have managed to turn a place of unspeakable sorrow into a locus of joy and caring.

The recovery — a process that will take a lifetime for some — is just beginning.

Tents are set up where clothing, food and home supplies are given away — no questions asked. Old school music blares and people bustle about. The atmosphere is like an all-day family backyard barbecue. This is one way the community is healing.

Another way takes place a block away, where the Frank E. Merriweather Jr. Library, named for the late publisher of the Buffalo Criterion, has emerged as an impromptu community services hub. Inside, near the region’s top resource center for Black history, Top’s management has made counseling available to its employees. Individual and group sessions are provided at no charge by organizations like the Red Cross, BestSelf Behavioral Health and the Community Health Center of Buffalo.

Almost everyone who experiences an incident of mass violence will exhibit a stress reaction, according to the National Center for Post Traumatic Stress Disorder, a division of the U.S. Department of Veterans Affairs. For most, those symptoms will decrease, but others will grapple with the psychological effects over the long term.

Carlton Steverson is trying not to become one of those people. Steverson, 28, who lives a few minutes’ walk from the supermarket, is at the Merriweather Library daily for mental support. He’d started working at Tops one month before the shooting. He was behind the deli counter at the time of the incident.

“It all happened so fast,” Steverson said.

When Steverson heard the shots, he hid with some others inside a commercial food cooler, then escaped through a back door once he no longer heard shooting. After the anxiety of dealing with police and reporters, Steverson didn’t get a full night’s sleep for nearly two weeks.

He said he’s been overwhelmed with sorrow for the families of the victims whose bodies were so mutilated that open caskets were not a possibility. Counselors are helping him process this, he said. Being around fellow surviving employees and seeing they’re OK gives him some peace. He hopes to return to work once Tops reopens.

As a result of the shooting, Steverson said, he values life and his place in it like never before. He said he’ll smile more in the updated store.

“It’s not just a job — I feel like I’m part of something bigger now,” he said. “I care more about my coworkers. If I see someone having a bad day, I’ll make it my business to ask what’s going on and what I can do. And I hope customers too can understand that the cashier they’re dealing with might be going through something in that moment and maybe be a little more understanding.”

Others are healing by helping.

In the lobby of the library are booths giving the public immediate access to services. The employees’ union, the United Food and Commercial Workers District Union Local One, is giving away hoodies, hats, and other merchandise to maintain the sense of a unified working team.

A table staffed by the United Way has food vouchers. A job recruiter offers details to those interested about opportunities to campaign door-to-door for the governor’s election. Connie Joyce, community outreach coordinator and lead paralegal for a free legal clinic that part of the Western New York Law Center, explains her organization helps consumers navigate disputes with creditors. She says her group saved people over $1 million in 2021. She said she is boosted by the idea that some of the people she’s helped in the past are workers who may have been there on that Saturday.

Outside the library is a tent set up by World Central Kitchen (WCK), a global network of volunteers who convene at the scene of cataclysmic emergencies. They’re committed to being present on-site throughout June to provide meals twice a day for anyone who shows up. Volunteer Brian Kilianski, a gun owner from the Buffalo suburb of Lancaster, said it was important for him to be there.

“I’m white and in the suburbs but this is my community too,” Kilianski said. “This is Buffalo; this is what we do.”

He continued, “Even as a gun owner I still can’t fathom (Gendron’s shooting spree). I just don’t get it. That’s somebody’s grandmother, somebody’s sister, how could you…” he said, his voice trailing off.

“It doesn’t matter the color of your skin, we’re all in this together.”

PrevPreviousSouth African economy Is now bigger than before pandemic struck
NextBrittney Griner, the WNBA and placing a higher value on female athletesNext