Top 10 Urban Legends in the NFL 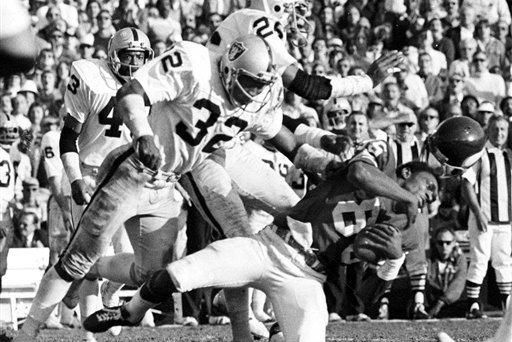 One of the most dominant defensive linemen in NFL history. He kept quarterbacks and offensive linemen alike up at night, wondering how they were going to block him. Imagine what kind of totals in sacks he would have accumulated if they calculated sacks back when he first started playing.

Taylor was the prototypical outside linebacker in the 3-4 defense. No offensive tackle could stop him and no coordinator could scheme up much to contain him. The only thing that kept him from being as good as he could have been was himself.

Wide receivers and tight ends caught the ball at their own risk when Tatum was around them at his safety spot. Sure, some of what he did was borderline but he definitely was an urban legend that many remember from his time with the Raiders.

The Minister of Defense preached a lot of sermons on his way to baptizing the quarterback. White’s power was something that was otherworldly when he rushed the passer.

Randy Moss had speed for days. And although he mostly ran one route and everyone knew it, there was no one that could stop it. It didn’t matter if you put a safety over there to help the cornerback trying to defend him either, as his speed was so great that he could outrun double coverage.

Just hearing about him and his legendary exploits on the football field was enough. He was big, fast and strong and set records for the Cleveland Browns and the NFL with his running style.

You’ve seen the dances he did and the leadership he displayed when playing in the NFL. What you also saw was the intensity in his eyes when at the middle linebacker spot. He was everywhere on the field and he was the model of a middle linebacker for a generation that watched him on television.

Along with being a workout warrior, Harrison had a demeanor that made you wonder if he really was human or if he was the character Deebo reincarnated. He wasn’t the best player on the field every time, but you could expect him to play the hardest and to get the job done. His play and demeanor on the field will not ever be forgotten.

Nicknamed Mean Joe Greene because of the nickname of the college he attended, North Texas State University, Greene was solid up front for the Steelers and his legend was that of a man that was a key cog of a dominant defense. Definitely a legend that many remember if not for his nickname alone.

Singletary was the captain of one of the most feared defenses in the NFL in Chicago. While some will remember Walter Payton on offense as the hallmark of those teams, plenty will not ever forget the intensity in Singletary’s eyes when he was lined up and engaged defensively.

Mike Patton is a freelance sports writer based in Nashville, TN. He has covered sports for 10 years for various organizations and publications. He also is the host/producer of the Touring The AFC South podcast.