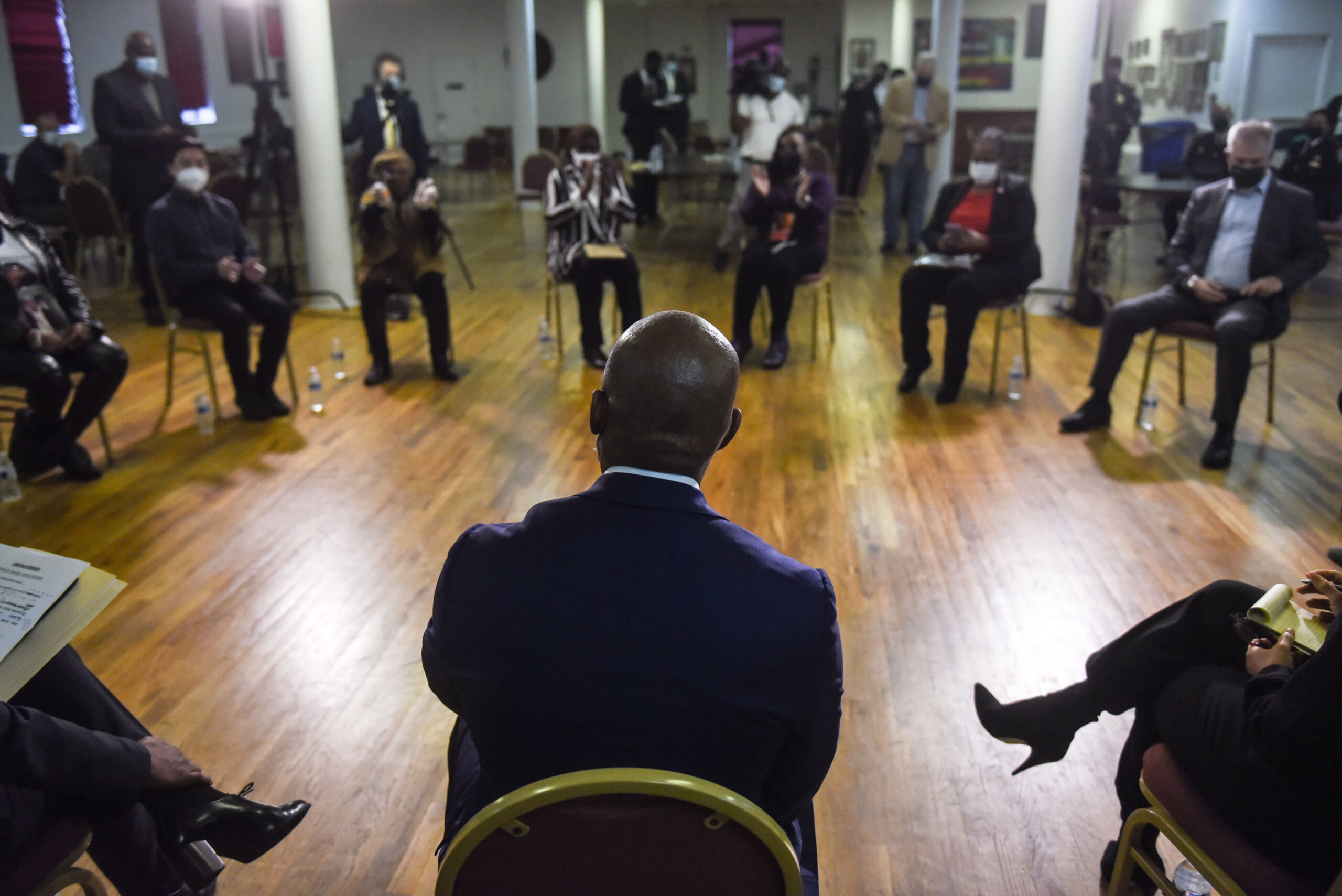 To put that in perspective, the number of Americans killed by guns annually is on par with those who die from breast cancer (43,000) and pancreatic cancer (49,000), according to the American Cancer Society. For some groups of Americans, in fact, shootings have surpassed all other reasons why people die.

“Gun violence is the leading cause of death of Black boys and men,” says Fatimah Loren Dreier, executive director with The Health Alliance for Violence Intervention, a nonprofit umbrella organization that works with groups using hospitals to stem gun violence.

Dreier says every year millions of Americans arrive at a hospital with violent injuries and often need more than stitches to heal physically as well as mentally.

This is why a growing number of trauma centers and hospitals across the nation are embracing hospital-based violence intervention programs to combat the revolving door of violent injuries in our communities across America. This collection of organizations on the ground from Oakland to Brooklyn is working with the White House to employ new ways to stem the gun violence crisis.

The hospital itself becomes the conduit to reach people living the gun violence crisis.

“When someone is shot they go to the hospital and their risk of getting shot again goes up,” Dreier explains.  “This is not only a golden opportunity to reach them, but it’s also a time to help them transition to getting the support that they need.”

The Health Alliance for Violence Intervention provides this conduit by supporting gun violence intervention programs in 85 cities across the nation. Such programs operate at hospitals in Boston, Philadelphia, Los Angeles and more. California is particularly rife with such programs.

“We support the growth and expansion of hospital based violence intervention programs with wrap-around services at Highland Hospital (in Oakland), and also hospitals in Sacramento, Salinas, and recently in Stockton, California,” Dreier says.

The Youth ALIVE! program in Oakland established the first hospital-based violence intervention program, called Caught in the Crossfire. This effort assists more than 10,000 victims annually with services like mental health, housing and employment, anfd follows up with them for a minimum of 6 months after their attack. Youth ALIVE! works with local hospitals and trauma centers directly.

“Intervention specialists meet traumatized victims of violence at their hospital bedsides to try and convince them, their friends and family not to retaliate,” says John Torres, associate director of Youth ALIVE!

“We also offer practical help and a path towards safety and healing,” Torres adds.

His counterpart, Gabriel Garcia, policy & advocacy director for Youth ALIVE!, explains, “We reach out to almost every single family in Oakland who loses a loved one to homicide.”

The group also helps families navigate the funeral process and introduces them to the California Victim Compensation Program, which helps families apply for reimbursement of funeral costs, Garcia says.

“That support is life changing,” Garcia adds, saying California was the first to offer this service.

Another longtime violence advocacy program in the Bay Area, the San Francisco Wraparound Project, started at the University of San Francisco by Dr. Rochelle Dicker, has been around since 2003.

Dickers is now working to expand her program in Southern California.

“In Los Angeles, a group of us, including people in the Los Angeles Department of Public Health, and through the Office of Violence Prevention, have developed a consortium for violence prevention,” Dickers says.

“The goal is to link individuals to programs that are developing at many of the 15 trauma centers across Los Angeles County,” she adds.

What also makes California stand out on this much needed advocacy platform is the legislative support that advocacy groups like these may soon receive.

“In California we are working with Medicaid to get the violence prevention professionals reimbursed for their work” Dreier explains.

Proposed state Assembly Bill 1929 is seeking to allow for the state’s Medi-Cal system to treat violence as a public health crisis by funding violence prevention through Medicaid.

“Violence is a chronic disease,” Dicker says.  “It’s an epidemic.”

While California has led the way in hospital advocacy for a number of decades, hospital-based violence intervention programs are growing and meeting the needs of victims all over the country, and in fact, all over the world.

There are even such programs now in the United Kingdom.

In New York City, where the Kings Against Violence Initiative has adopted a public health approach to gun violence, Mayor Eric Adams meets with the loved ones of gun violence victims to hear their thoughts on solutions.

In June, Adams testified to the U.S. House Committee on Oversight and Reform that the problem has gone beyond critical levels.

In Baltimore, Mayor Brandon Scott has embraced the notion of gun violence intervention through the Violence Intervention Project. A new way of addressing the crisis is necessary, and the public must broaden solutions beyond law enforcement, he told a panel audience earlier this year.

“When you are talking about serving warrants, people who need to be pulled off the streets because they have shot somebody — that’s the role for our law enforcement officers,” Scott said. “But what we cannot continue to do is to make them (police) responsible for everything,” he added.

The Health Alliance for Violence Intervention is one of the lead technical assistance providers for The White House Community Violence Intervention Collaborative (CVIC), an initiative which supports a coalition of 16 jurisdictions committed to using public funding to strengthen their ability to intervene against violence. Among the groups affiliated with the alliance are:

For more information about a hospital-based violence intervention program near you, visit The HAVI.

And, if you know someone who’s been a victim of gun violence please share this information and urge them to seek wraparound services.