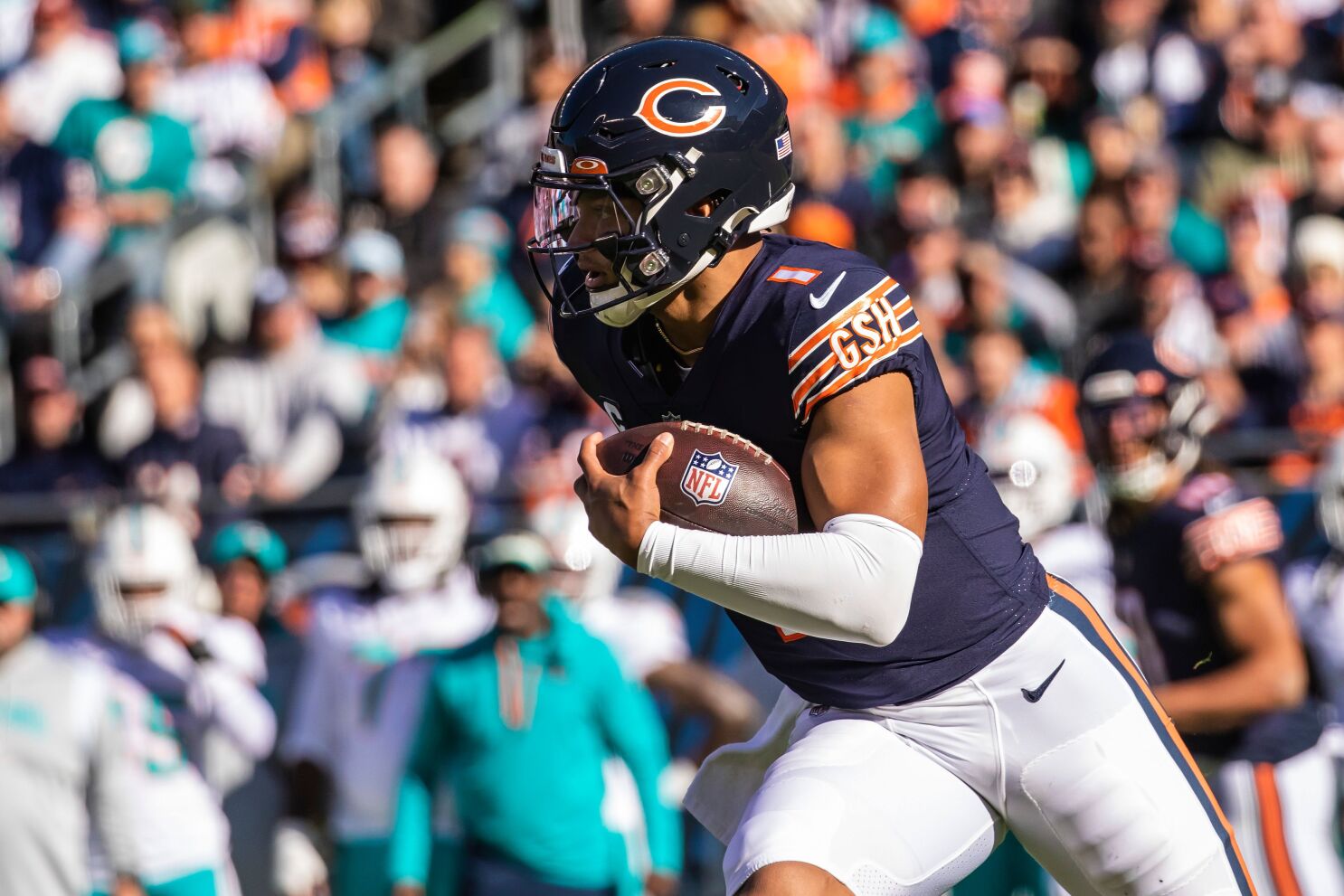 It’s time to recalibrate expectations to where they should’ve been from the beginning. The best thing that can happen for the Bears this season is to see steady, convincing strides from quarterback Justin Fields.

That’s the single most powerful determinant of their future, and it matters much more than losing 35-32 to the Dolphins on Sunday.

Fields set the NFL regular-season record for rushing yards by a quarterback with 178 and a touchdown on 15 carries. The only quarterback to beat that was Colin Kaepernick with 181 in a 2013 playoff game against the Packers.

Fields’ touchdown came on a 61-yard run, the longest by any Bears quarterback, in the third quarter to get the Bears within 28-25.

This is the reality of a rebuild. The Bears badly needed an overhaul, and that starts with a teardown. It’s hard to win during that phase, and the defense has been hit hardest by general manager Ryan Poles’ demolition.

When the Bears face teams like the Dolphins, who have a quarterback and other major pieces in place like Treek Hill and Jaylen Waddle, they’re going to be overmatched. It’s on coach Matt Eberflus, a career-long defensive specialist, to fix that as much as possible and make them respectable, but there’s low ceiling on what he can extract from this personnel after a parade of top talent left the building.

So when the Bears catch some breaks and make a few unexpected plays, particularly takeaways, they’ll compete and have a shot at pulling an upset. When they don’t, they’ll get blown out like they did against the Cowboys last week.

The standard for any team in any sport is to be contending for a championship or clearly headed toward doing so. In the Bears’ case, if Fields is headed the right direction, so are they. The rest of the roster is just details.

In addition to his big rushing numbers, Fields completed 17 of 28 passes for 123 yards and three touchdowns.

Heading in the right direction doesn’t guarantee someone will arrive at the destination. There’s always concern about stoplights, flat tires and wrong turns. Ryan Pace and Matt Nagy started out on course before hitting a variety of snafus and eventually blowing the engine.

The only thing that can be legitimately evaluated at this point is whether his first few steps make sense. There were hits and misses over his first several months, but the Bears seem to have settled into the right spot. Poles finished cleaning up what he deemed to be Pace’s mess by trading Roquan Smith, then made his first big move toward actual construction by bringing in wide receiver Chase Claypool.

Now the Bears look like one of those fun upstart teams. That’s a good place to be. Those teams are fun to watch as they take their shot each week and gradually grow together into something that offers hope for the next season.

It’s been a while since the Bears provided hope, as well as entertaining Sundays, and they can thank Fields for that