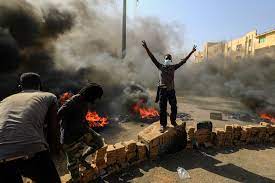 A Sudan doctors’ committee said three protesters were shot dead and more than 80 people wounded as demonstrations raged against the military’s seizure of power.

The exact number of injured is still being calculated, the Central Committee of Sudan Doctors said Monday on Twitter. Members of the military opened fire on protesters who’d gathered outside army headquarters in the capital, Khartoum, causing casualties, according to Monim El-Jak, an adviser to Sudan’s minister of cabinet affairs.

Witnesses in Khartoum said they heard periodic bursts of gunfire throughout the day. A Western diplomat briefed on events said there’d been a disagreement among senior members of the military leading up to the coup about how to deal with rising tensions in the country.

Sudan has been run by an uneasy coalition of civilian and military figures in the aftermath of the 2019 uprising that unseated dictator Omar al-Bashir following three decades in power.

Some army officers were arrested on Monday as divisions emerged inside Sudan’s security apparatus, according to the diplomat, who’s not authorized to speak publicly.(Updates with casualties, location of violence, diplomat comments starting from first paragraph.)© 2021 Bloomberg L.P.