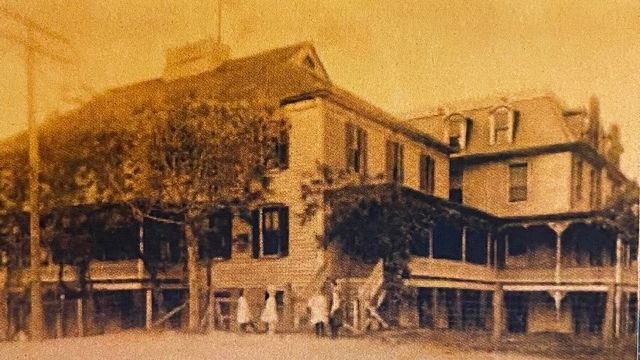 HARPERS FERRY, W.Va. — On a sharp, stony outcropping above the place where the churning waters of the Shenandoah and Potomac rivers meet, African-American entrepreneur Thomas Lovett made a vow in 1888: “Here, where the martyrdom of John Brown took place, I will build my hotel.”

He was standing less than a mile from the federal armory in Harpers Ferry, where abolitionist John Brown and his 21 followers, including some escaped slaves, were captured in a shootout with federal troops in 1859. That showdown set the stage for the U.S. civil war.

Lovett had lived through the bloody civil war and the violent “Jim Crow” era and he wasn’t going to be derailed. He opened the Hill Top House Hotel in 1888 and operated it until the Great Depression forced him to sell in 1935. In those years he welcomed U.S. presidents Woodrow Wilson and Calvin Coolidge, and American icons including inventor Alexander Graham Bell, author Mark Twain and W.E.B. Du Bois, who came to Harpers Ferry to launch the Niagara Movement for civil rights.

The Hill Top House’s fortunes declined with the collapse of the West Virginia coal industry. By 2008 the building was shuttered, a dangerous ruin.

Two Washington D.C. philanthropists, Fred and Karen Schaufeld, plan to spend $139 million to rebuild it, restoring the dream of racial harmony and shared prosperity that the hotel represents. Karen is CEO of SWaN & Legend Venture Partners in Leesburg, Virginia, and together the couple are part owners of the Washington Nationals and other professional sports teams.

“This was slave-holding Virginia but when [Lovett] was 33 he opened up this place,” Fred Schaufeld said. “Think about it. How does a guy in that environment come up with the most … the skill set and the financial resources, the insurance, the management, everything?”

The Schaufelds envision a resort hosting seminars, writers’ conferences and philanthropic gatherings. The new resort will have a spa, a pool, a chef’s garden, a theater, conference rooms and underground parking.

The road to rebuild the Hill Top House has been long and rocky. Harpers Ferry officials, who have officially dropped the apostrophe from the town’s name, initially opposed the plan, lodging an ever-changing series of objections. Construction was supposed to begin in 2020, but the COVID-19 pandemic interrupted that. Other obstacles included a contested town election which ended up in the West Virginia Supreme Court. After 17 Zoom meetings and 42 hours of testimony, the Harpers Ferry Town Council passed legislation in February approving zoning and street changes that would allow the old hotel’s demolition and rebirth.

Jefferson County Convention and Visitors Bureau executive director Annette Gavin Bates testified that Hill Top’s presence would generate $360,000 in new revenue for the town of Harpers Ferry, which has some 300 residents.

“Thomas Lovett built a great building, but it was cheaply cobbled together,” said Christian Pechuekonis, a financial adviser and innkeeper who serves on the Harpers Ferry town council. “We have given them the permit to demolish the old hotel, and this must be approved by the Board of Zoning appeal. And my wife is on that panel.”

Pechuekonis was the only member of the town council re-elected in June. The former mayor, who lives 100 yards from the hotel site and opposed its redevelopment, and three other council members chose not to run. Pechuekonis said he ran for re-election because he wanted to see the Hill Top House rebuilt.

“This is a historic town with a massive black history legacy,” said Pechuekonis. “This part of town where we live was historically black in its day, and Storer College &mldr; was a big campus and sanctuary for freedmen.”

“Thomas Lovett attended Storer College in Harpers Ferry, which was founded in 1867 to teach newly freed African-Americans to read, write and compute mathematics,” said Bernard Demczuk, a historian and professor at the University of the District of Columbia.

During a speech at Storer in 1881, abolitionist and author Frederick Douglass, who had escaped slavery himself, said John Brown’s defeat was “the victory of his life.”

Brown hoped to incite a slave revolt in southern states by forcibly seizing the weapons in the federal arsenal. His Oct. 16, 1859 raid on Harpers Ferry lit a fire that led to the Civil War, a bloody conflict that claimed more than 3 million lives in a nation of barely 32 million inhabitants.

Then-Col. Robert E. Lee commanded the operation to retake the arsenal, which he did with a group of U.S. Marines and other troops. Brown was arrested and tried for insurrection. Stonewall Jackson and Jeb Stuart were among the soldiers who guarded Brown after his capture.

Seven members of Brown’s company were killed in the raid, including two of his sons. Brown was among 18 injured, hurt so badly that he had to be wheeled into court on a hospital bed. Among the witnesses to Brown’s execution were poet Walt Whitman and John Wilkes Booth, an actor who later murdered President Abraham Lincoln.

Now, an American flag waves above where the Shenandoah and the Potomac rivers meet on their journey through the West Virginia mountains — a view Thomas Jefferson once called “stupendous.” A few steps from that flagpole is the Hill Top Hotel.

Standing outside the old hotel, Karen Schaufeld talked about the history and significance of Harpers Ferry. “This is a confluence not just of rivers, but of cultures, American history,” she said. “You had the Native Americans, George Washington surveyed here, Thomas Jefferson who looked at this view and recognized how spectacular it was.”

“You look at the shape this place is in now, then you realize that this was one of the great places on the East Coast where everybody who was anybody used to come,” she said. “One of the great African-American entrepreneurs, Thomas Lovett, built this place. He was born five years before the Civil war.”

She said that during a meeting of the Niagara Movement at the hotel, guests took off their shoes and socks and visit the firehouse where John Brown led his raid. “This is hallowed ground,” she said.

“The legacy of Thomas Lovett and what he built and achieved as a black man in the late 1800s is too important to sit vacant and crumbling on the hilltop,” said Cathy Baldou, executive director of the Harpers Ferry Park Association and co-author of a chapter in an anthology titled “Brave Spirits: The Lovetts of Harpers Ferry.”

“Lovett built and rebuilt his hotel twice before any of us living in or visiting Harper Ferry walked this earth,” she said.

The hotel was a Harpers Ferry icon. It welcomed artists, writers, poets, presidents, civil rights leaders, and all those who weren’t permitted to stay at other hotels. Some came to remember John Brown. Others came to forget Jim Crow.

“Lovett’s story needs to be told, but it also needs to be told accurately,” Baldou said. “For me, it’s not about the square footage or the number of beds or the paper streets. It’s about the truth of our past and how we preserve it for future generations. There are lessons to be learned in this saga. We can’t lose sight of that.”